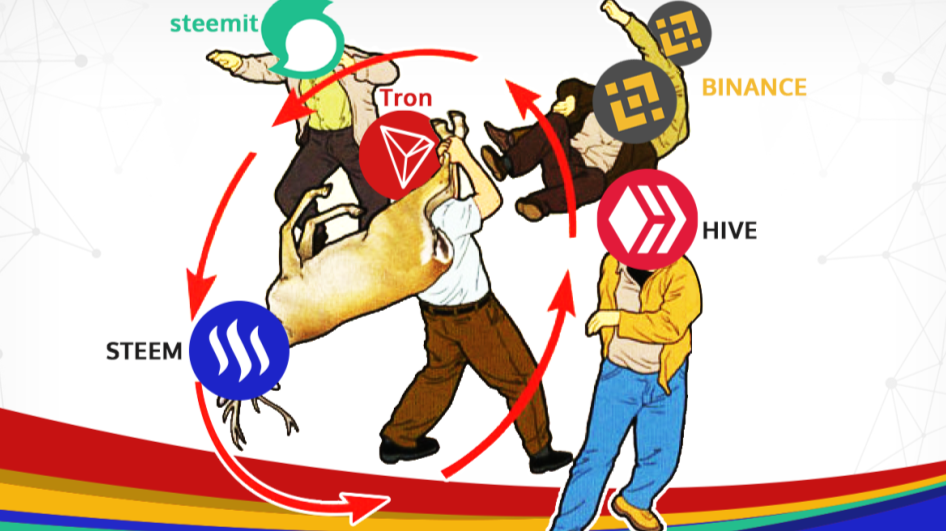 If you haven't followed the STEEM vs HIVE drama then you are in for a great series of events here!

It began when Justin Sun announced an acquisition but this turned out to be one of the biggest stress tests for a decentralized community - eventually splitting the community entirely in half.

This entire scenario became such a multi-threaded situation that spread across many different players within the entire cryptocurrency community, including exchange giants such as Binance and Huobi.

A lot has happened ever since the acquisition and it started to become slightly complicated so I decided to put a post together with everything that you need to know inside!

It all started on Valentine’s day in 2020 when the Tron Foundation announced that they ‘partnered’ with Steemit. Well, that’s how it was worded in the announcements among media sites.

Justin Sun announced the takeover through a AMA on the decentralized platform dlive.tv; 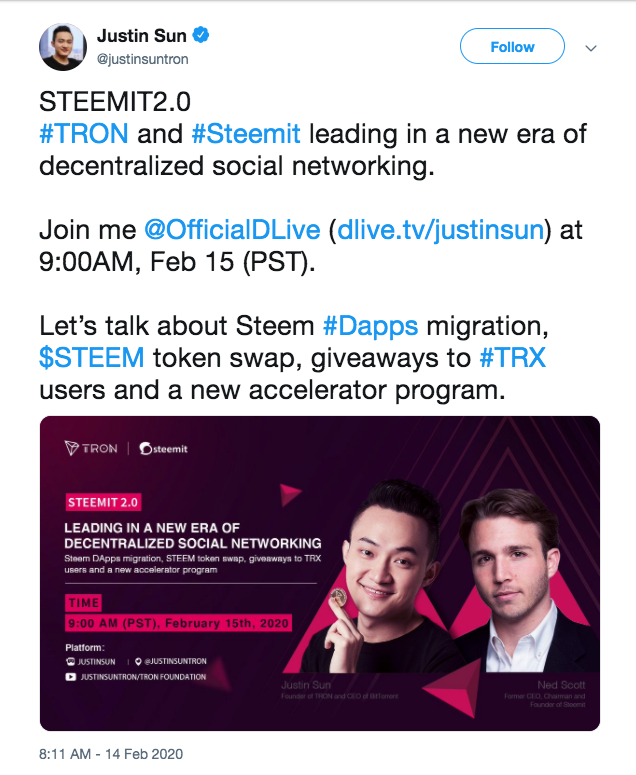 During the live stream, Justin Sun had officially actually he has bought Steemit, the blogging platform that is run on top of the STEEM blockchain. He had planned to take over and force a migration for STEEM tokens and all of the dApps on STEEM to switch to the Tron blockchain.

The thing that troubled many STEEM holders and STEEM dApp creators was the fact that Justing Sun announced that they would be migrating Steemit over to the Tron blockchain...without asking anybody in the community.

Ned Scott, the founder of STEEM, also publically announced on Twitter that he had sold Steemit to Justing Sun; 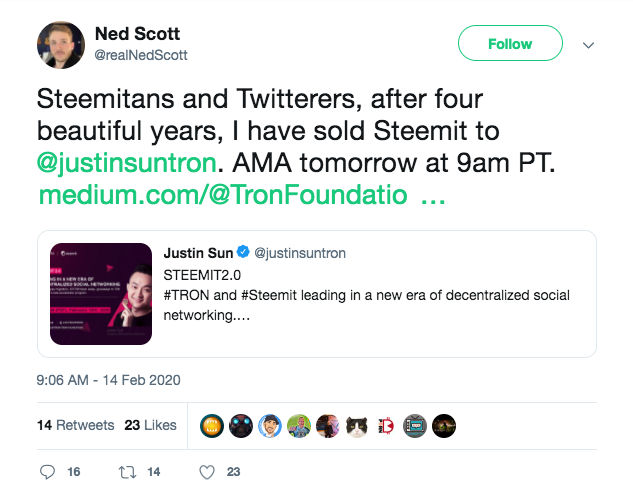 Price Check: STEEM spiked 25% and reached as high as $0.31 on the announcement day.

Figurehead members of the STEEM community, including witnesses, developers, and stakeholders, co-author a Softfork proposal known as Softfork 222. This Softfork was a move to maintain the status quo on the network and to ensure decentralization.

You see, when Tron took over Steemit, they also took control of a sizable amount of STEEM assets that Steemit owned. These STEEM tokens were mined at the start of the blockchain with an unfair advantage and therefore are known as the Steemit Inc ninja-mine stake. It has been estimated that the ninja-mine could potentially be around 20% of the total STEEM supply.

There was a social contract in place with the community that the Steemit assets would never be used for voting in any community governance scenarios. However, the STEEM community members did not trust Justin Sun as a new majority stakeholder of STEEM and moved to block the ninja-mine stake Steemit voting rights with Softfork 222.

The takeover actually created a scenario that allowed the social contract that was made to the community to be integrated into code on the blockchain. Softfork 222 was a reversible Softfork that would prevent any STEEM that is related to Steemit from taking part in any governance voting.

Price Check: STEEM had already dropped by 35% since the announcement and traded at $0.20. 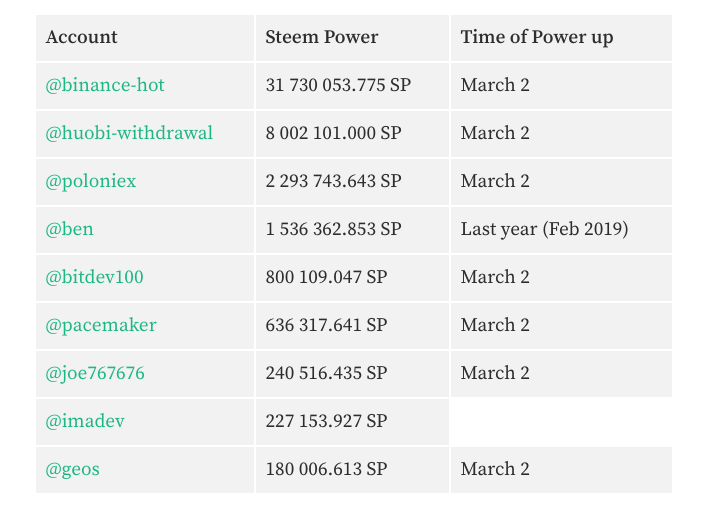 Vitalik Buterin voices his concern regarding the fact that big exchanges used depositors’ funds for voting;

During this period, the head of communications for Steemit, Andrew Levine, and the senor blockchain engineer, Michael Vandeberg resigned from their respective positions.

March 3 2020 - Justin Sun Announced They Had Defeated The Hackers

In a series of Tweets, Justin Sun announces that STEEM had defeated the hackers and all funds are “safu” (safe).

He also voiced his opinions on the entire situation. He started off by stating that “malicious hackers” froze 65 million STEEM that were legally owned by Steemit.

He continued to state that they had confirmed with lawyers that this was a criminal activity and that they needed to act immediately to “safeguard” the STEEM blockchain.

He concluded his Tweetstorm by apologizing to the community and thanking Binance, Huobi, and Poloniex for their support;

Changpeng Zhao announced that the Binance votes were removed on Twitter;

He also stated that it was a miscommunication and that Binance have no interest in voting for on-chain governance.

Huobi also announced that they would be withdrawing their votes from the entire scenario. Huobi released a press statement in which they stated that they may use user deposited funds to help block malicious activities on different blockchain networks.

They continued to state that they were misled into believing that the Steem network was at risk of an attack and decided to help Steemit to protect the network. Their intention was always to allow the community to have the final decision on network governance and thus, moved to remove the Huobi votes.

Binance posted an apology letter to the STEEM community regarding the miscommunication during the fiasco and reiterated that Binance always stays neutral and has no interest in in-chain governance.

The whole staking process also created another problem for Binance.

When you stake STEEM to vote in governance matters, STEEM is locked up into the staking for a certain period of time. As a result, STEEM holders that hold accounts with Binance were unable to withdraw their STEEM assets for a period of time.

It seemed that the STEEM community had reached their limit and decided to announce a hard fork on the network to give birth to Hive.

Hive would be created by a large group of STEEM community members who were working for weeks before the announcement. The project was to hard fork from the STEEM blockchain to go in their own direction in which Hive would be totally decentralized without any ninja pre-mine.

As this was a hard fork, all STEEM holders would be able to receive HIVE tokens in an airdrop on a 1:1 ratio. Furthermore, all existing user accounts on STEEM will be valid to use on the Hive platform and users would have two separate accounts for each platform.

The interesting thing about this hard fork is the fact that the Hive team decided to not include any accounts associated with Steemit Inc and accounts that are known to have contributed to the centralization of Steem blockchain.

Price Check: STEEM surged on the announcement of the Hive hard fork. It actually managed to increase by over 300% to spike as high as $0.5. It eventually settled to close at $0.30 on March 19th.

As a way to mitigate the damage done during this entire fiasco, both Binance and Huobi announced that they would be supporting the Hive hard fork.

The exchanges would be taking snapshots of all holdings and distribute the HIVE tokens accordingly to users on their exchanges.

Twitter user Girl Gone Crypto posted a video in which one of her posts regarding the Hive hard fork was censored from the Steemit platform. You can check out her video in the Tweet below;

In the video, she states that she made a neutral explainer video to explain what was happening with the Hive hard fork and how Steem users can get prepared. Shortly after posting, her content was removed by Steemit as Justin Sun made a move to censor all Hive related content on Steemit.

The Hive blockchain started as the hard fork was successfully complete. All STEEM holders were airdropping HIVE tokens on a 1:1 ratio - all except the ‘founders reward’ or ninja pre-mine.

Decentralized Applications that were built on the STEEM blockchain started to migrate to the new Hive blockchain. This included the Steemit rival Steempeak which turned into Peakd for Hive posts.

HIVE secured a listing on the Bittrex exchange and started to trade 20% higher than STEEM. HIVE was valued at a price of $0.154 and STEEM was trading at $0.154.

Justin Sun made a move to ban 20 accounts that were owned by the former delegated witnesses on the STEEM blockchain. This was implemented through Soft Fork 2288 and it froze over 17.6 million STEEM.

This was pretty much a move on Sun’s part to limit the power available to previous STEEM supporters that have now moved to HIVE and likely done in retaliation for blocking Justin Sun from taking part in the hard fork airdrop.

Binance announced that they will list HIVE on its platform. The listing would see the opening of both HIVE/BNB and HIVE/BTC markets.

STEEM also surged on the 27th as it reached as high as $0.27. It was still trading at a much lower price than the newborn rival.

STEEM continues to retaliate against prior STEEM witnesses (now supporting HIVE) as they freeze another $5 million in funds on the STEEM blockchain in Hard Fork 23.

Former STEEM witness @pharesim2 stated that he had around 80,000 EUR that was personally being frozen in the hard fork;

Vitalik Buterin also chimed back in after this move to freeze more STEEM with the following tweet;

HIVE was still trading higher than STEEM during this period as it averaged a price of around $0.31.

Justin Sun released a statement to the entire Hard Fork scenario. He claimed not to be a part of this latest hard fork but states he understands why the witnesses are doing it. He states that HIVE has already taken their assets away ‘by force’ which means that the current STEEM witnesses are losing out.

Lastly, Sun stated that HIVE witnesses also stole ‘many millions of dollars’ from Steemit Inc and they are working together with law enforcement to get their funds back that were blocked in the original HIVE hard fork. 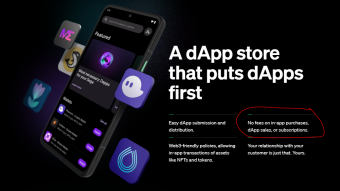 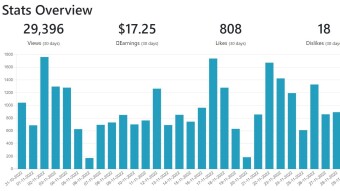 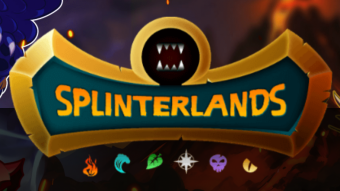