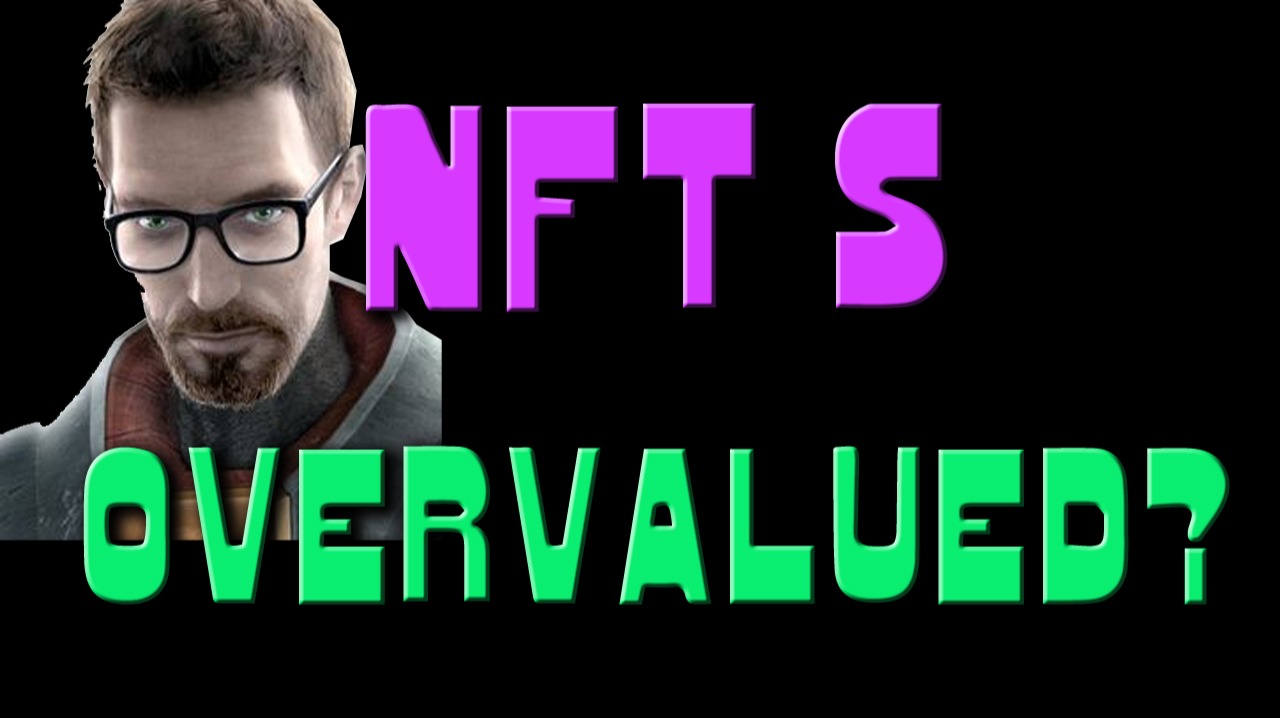 Lulz to everyone. It's time to dive in to NFT commentary hours again with your host, Gordon Freeman.

What is the Half Life of an NFT? (didja like that?... see, because Gordon is a character from... yeah nevermind)...

Non-Fungible Tokens have been around for a longer period of time than the most recent uptick in the "fad" of NFTs. If logic follows historical perspective, it is perfectly accurate to classify them somewhere between the pet rock and beenie babies. But, don't think that I am dismissing their market value or even their potential going forward. I am a future-centric tech-geek kinda guy. I am not afraid of change and I enjoy following trends, but sometimes you have to recognize the truth for what it is: at present stage, NFTs are the result of what happens in a pandemic when you cross hype with marketing and sprinkle it with a tad bit of sensationalism.

The visual artist in me says "that being said, the artist needs a break anyway, so might as well be NFTs". But, the thing is, the super smart people in the room are either suiting up for a fake-out, or they are really buying into some of that hype that should be a red flag to all.

Treating the jpeg-for-credit identity politics of NFTs as if they are meant to be values in the exact same manner as tokens and coins like Bitcoin, Litecoin and Ether is not only odd, it's actually an incredibly important mis-categorization. It concerns me because a significant amount of money is oozing into the NFT market, not as a fun "let's see what happens 'cuz I like that picture and wanna support the artist" but as an idea that it's paying for someone's retirement.

There is absolutely no way to know whether an NFT bought for, gulp, $400,000 today is going to appreciate in value just because it's receipt has a permanent record on the blockchain. The idea of imaginary ownership may not be even remotely the same as owning your own tokens or coins in self custody. It is so incredibly likely to develop into something else in the years to come, that 'being early' may not have an upside at all. And truly, if it is about having fun with new forms of investments that is totally fine. It would still be really fun to have a pet rock, too! It represented an era before all of this internet nonsense. But, what about people who have invested a significant amount of their life savings, or are trading on the markets of NFTs as if the competition from one image to another are a stable platform for assessing value. Unless you come from the traditional fine art, or pop-art world, you may be in way over your head.

I DO get it; I truly do. And hey, maybe the early-bird NFTs will hold their multi-million dollar valuations. Time will tell.

That's the thing; digital intangible objects can take so many different forms, but for the majority of the lifespan of the internet, it has been about acquiring things that have been digitized so one can do something with it. People didn't care a whole lot about whether anyone else had an album, a picture or a movie. They just cared that they could watch and listen without paying "the man".

The first CryptoKitty sold for $1M if memory serves me correct. It was the first before the onslaught outbreak of what we have today. What is that worth on market today? $2M? $1M? I don't know, I'm asking you. Do people care, or are the BayApes far too important to care about kittens now?

Prior to the crypto-centric aspect of this, I studied numerous game developer conventions, dabbling in creating games myself. The take-away for free-to-play models was the in-game up-sells. The lesson time and time again was not to underestimate the player's willingness to spend irrational amounts of money on imaginary items. There were plenty of examples of casual games with people buying $700 purses and $300 hats. These were people spending casual time in passive games that developed such an identity with how they wanted a character to appear in-game, that it didn't phase them that there's nothing outside of the game to show for the real, significant money spent. Great for the game developer, but I think in terms of value for money, if not as an investment. The likelihood that people are still playing that game 5 years later is nearly zero, and what is that person supposed to do to justify being down $500 or whatever the case.

On Steam, people trade in-game assets on open market much like we trade crypto. I understand over-paying for something that helps you unlock goals or perform better, but when you see in-game swords selling for $1700 you have to wonder where these folks are living. Again, I can understand the value in intangibles, but I tend to weigh the longevity of anything my hard-earned money is going to go towards.

Anything can be an NFT, which sounds sophisticated until you really break it down for what it is: technology we already had all along, that you can now take pride in paying too much for, because it's a new form of digital scarcity.

Again, I DO get it, and I actually am a visual artist as much as a composer and songwriter... and writer writer.

In the traditional art world, the original is the masterpiece and holds real value, prints have a tier-level from signed, limited prints down to common posters and cards and the sort. You can even get a near duplicate of a canvas print, but most of these are at cost value x retail, meaning no one expects a non-limited print to hold a significant value.

An NFT cannot, under any variable, be a scarce item, so we understand that it means ownership is limited, and that owner-identity is what is being permanently time-stamped for the buyer. So really, the underlying value of an NFT is an entirely separate category that should be exploited, and it has for some other projects, but not in a meaningful way that is transforming the internet. The underlying fact that a time-stamp can prove ownership, belongs precisely at the center of copyright law, publishing, and proof of provenance, meaning proving that something is original because the right people own it. There's a signal crossed that the underlying tech is attached to the image, song or other file. The veil hasn't fully lifted on this yet, in my opinion.

On top of the unusual fanaticism, there is a lot of extreme pump-shilling going on with NFTs. That is happening with crypto all around for sure, but the hysteria is different, and the irrational nature of the extreme prices is spectacular compared to general coins and tokens.

The fact that legendary auction houses have skipped over utility of the NFT protocol and jumped straight for the fad, in offering high-price NFT auctions, is the sign I am right about it being a fad. So little thought is going into whether NFTs should be exploited by famous people, that everyone is simply leaping in head-first grabbing up the action while its hot. Guess what; if everyone is certain this is the opportunity to squeeze into "while its hot" that speaks very strongly to the likelihood that the best over-valuation is in a narrow time window before the bubble bursts.

Don't treat this as one of those "Gordon is against NFTs" because I know how that reads for people that are completely sold out on the idea. What I am offering, as I often like to, is perspective. I get it, if someone wants to get in early on something that will evolve and possibly age well, but that is how we think of, for example, getting in on Bitcoin at $1, 10 or even $500. When you come out the shoot paying $1M for a unique picture of a cat, that's a pretty strong confidence that the actual ownership as such is an investment, more than just a bit-sized vanity score.

Something to think about.

And on that note, Crypto Gordon Freeman, for now... out.