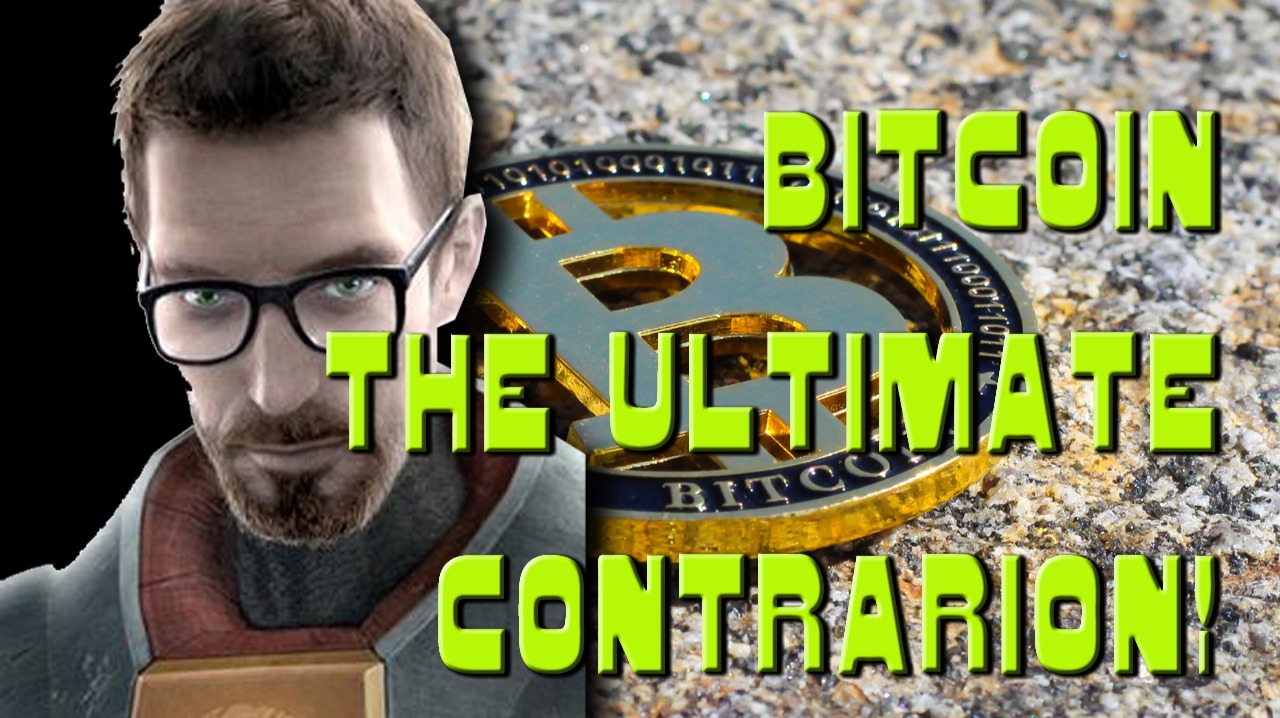 If you're around the same place long enough, you'll see the same things repeat themselves.

In this case, Gordon's been in the crypto world for 5 years now full-time, (uh, double full time), and one thing is clear to me: Bitcoin is the ultimate contrarion.

Let's start at the beginning.

Bitcoin was made with the hopes of being a better e-money, but even more, being a better economic principle than fiat (fun fact; non-crypto people still mostly have no idea what you mean when you say 'fiat'). It was designed to decentralize certain points of power and points of failure, while making it friendly to start up, but more of a challenge as it 'hopefully' grew in interest.

Truth is, Bitcoin provided the incentive to mine Bitcoin, but without any of the things we see today in the greater crypto landscape. Considering that ETH came along a few years later as the largest secondary in the market, and did raise funds and did have a law team deal strictly with avoiding the future headaches of classification as a security, it's remarkable that in truth, none of this would exist if Satoshi didn't choose to remain anonymous, and chose to basically let it fly on its own merits.

That is significant; let it sink in.

The initial promotional launch of Bitcoin was making an .exe and asking a few tech geeks to install it and see if it worked. And, it had to be rebooted at first network error after testnet.

I don't know about you, but my Momma taught me not to download and install exe's from strangers! Well, okay my Mom doesn't have a clue what an executable is... not even a little bit. But, the anon Satoshi had enough interest and trust from people like Hal, Ken, Adam and other origin-users, that it was worth the curiosity of joining a geek network of cryptography enthusiasts, and it didn't hurt that there were some key figures cited in the white paper.

So, you have a small group/email list who are interested in the tech, and some of them had given a try at solving double spend with their own e-currencies in the years prior. Other than that, there was no promotion of Bitcoin of any significance until the first days of Mt. Gox and Roger Ver, Bitcoin Jesus. In fact, Silk Road pushed Satoshi into the darkness never to return as far as we know, unless he really is a government op., and the Mt. Gox inside job, which I'm certain it was an inside job, and for the most part none of the rest of us really would know or care much about any of this if it weren't for all of the negative press.

Bitcoin is a contrarion; it loves bad news and it hates good news, and I absolutely adore it for that reason!

If the current crash is happening from over-leveraged futures and derivatives, then this will be an ongoing battle for the last coins in circulation. If this is happening partly because the House Committee are constantly looking for ways to shill the U.N.'s climate hoax for more greedy carbon credits, then there are people in the market that will never understand much about energy use, capacity, renewables, market-pressure OR the reason that good money is more important than avoiding the real-world incentive of PoW. In fact, Proof of Work may be seen as archaic if there are better protocols, but in truth there's nothing still to this day more brilliant than causing individuals, companies and nation-states to have to find the most efficient way to power a revolution that is the last true arm of freedom and potential financial fairness. Sure, anything else could potentially come along and model itself after Bitcoin, but do you trust the governments of the world to allow a new 10-year build to succeed? Yeah, me either.

I am nearly certain there will be more than $1T of actual HODLs in Bitcoin in the next few years. I also think that the biggest hands have yet to enter the space. I also also think that Michael Saylor is going to continue the path of explaining Bitcoin to smart CEO execs until they start adding Bitcoin to their balance sheets. Because borrowing against a highly-valued scarce asset with high volatility that trends up over time is financially superior to maintaining earnings in fiat that loses on average 7% of its value every year (and somewhere around 27% in 2021 Lets Go Brandon), it only makes sense that any business that believes in Saylor's template will HODL and borrow against their holdings. Bullishx100.

If the crash is happening because Russia is invading Ukraine and Biden isn't quite sure why the world thinks he's got dementia, and China is joining Russia to squish his sanctions, then we can look at the correlation to a sagging stock market and see that Bitcoin's drop was less significant than FANG stocks with which it is usually in tight correlation... again a contrary contrary move.

But, I think the more illogical may be the more potential honest reason Bitcoin is tanking before building a new support level. I think it just hates good news. Bitcoin be weird- lol.

Jack leaves Twitter and sets up a defense fund to protect Bitcoin and other important projects from the wild sue-happy whims of Notoshi and whatever is to come. Bullish. Bitcoin goes down.

Bukele goes to speak with Turkey, likely about getting them on the Bitcoin standard. Bullish. Bitcoin goes down.

A few years back Bitcoin hit an all time high around $20,000. Many speculated that it was due to a first listing on the CME, but contracts were very low volume compared to expectation. Bitcoin went up.

Having said all of this, it is very possible that Bitcoin simply is still in correlation to stocks, and when the FED shows its incompetence and announces there will be 4 rate hikes and most people think it will not be enough to cover the $28+T balance sheet on debt, that's a good reason to go down.

The fact that Russia is making it clear that they plan to ban crypto completely (uh huh, acquire, then lift ban for the pump) is a good, logical reason to dump.

Maybe that's all that is going on. Maybe.

But, I like to think it's more akin to Bitcoin's big orange middle finger grinning back at the establishment.

I never used to be this counter-culture, until the culture and its politics became so utterly corrupt that it is the only wholesome way to be, to stick it to the man.

So, keep on HODLing, keep on DCA'ing, keep on trading and providing liquidity to the prior 2, and keep on telling your family and friends that the future of money is Bitcoin, or crypto, or whatever it is you believe it to be (as long as it isn't NFTs but that's a whole other thing).

Thanks for reading. As always, I don't do this for the mad gainz, although I do plan to earn my first Lambo $0.12 at a time- lol. I do it because I have something to say, and this is my heroic safe space to do so.

This stuff matters, and we all should think in terms of leaving a legacy of some sort behind. Perhaps someday Gordon meets his maker in total mid-sentence, and in a time such as that, my words, nerdiness, wish to rescue the world from totalitarianism while making a big payday and desire to be some piece of an important revolution will mean something to those I leave behind. If not, then I'm dead and who cares. But if yes, then it is largely what drives me today, and probably tomorrow as well.

And on that note, a very hopeful Crypto Gordon Freeman says to you, for now... see ya before $58K, and for now... out.