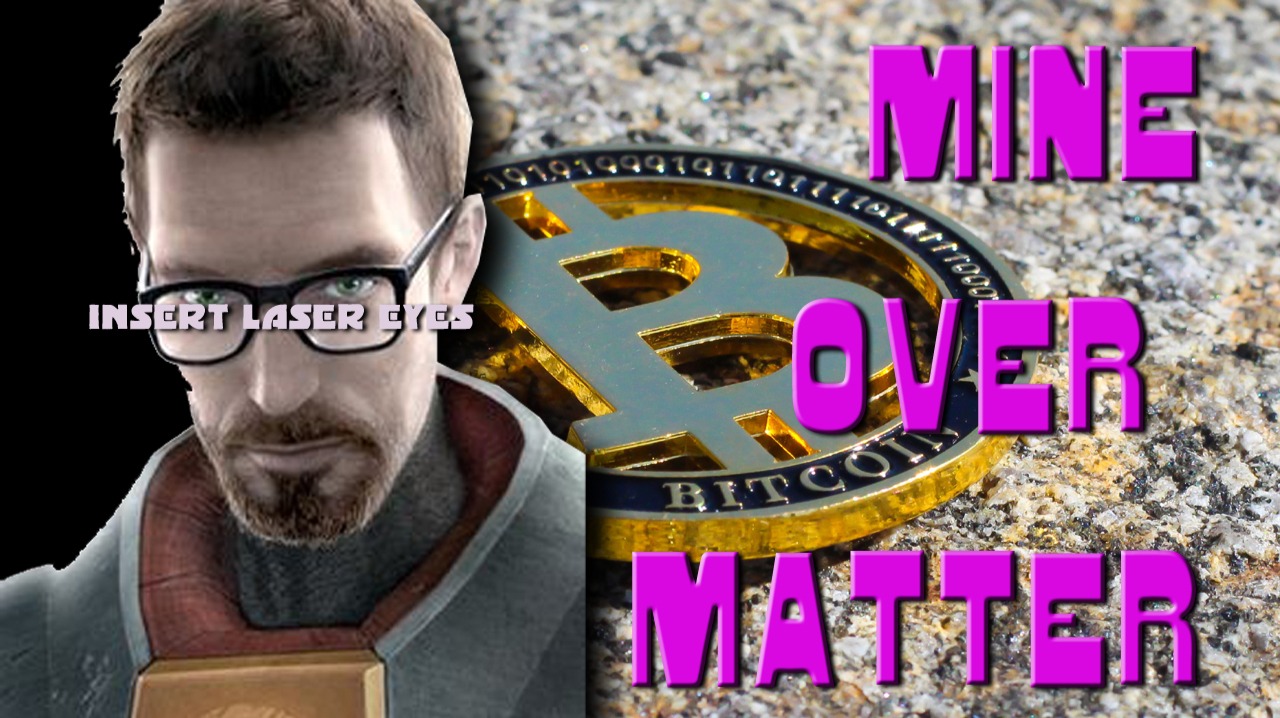 The two sources below came from Kraken's most recent newsletter report (which also happens to be very well written and on-point).

First, let me add a little bit to the House Energy and Commerce Committee's experience with the whole "is Bitcoin green enough to play along with ESG Agenda 21 sustainability goals?" thing. There's a history of absolutely bizarre, outlandishly inaccurate metrics on the amount of energy Bitcoin consumes, and how that breaks down to a transaction-based average. In truth, 58%-ish sustainable, renewable 'clean' energy sources is not a lightweight quote. It's serious and vetted with the actual miners, verified by their choice of locations and the local governments with whom they make such arrangements. Secondly, government-biased reports via the World Economic Forum, in 2017 stated that by now, Bitcoin will have completely consumed all of the world's energy resources. How we doin' so far?

The accurate number sits around 0.6% of the world's energy used for global Bitcoin mining. Since we know half of that is from the exact sources of clean energy we are lectured on, you would think Bitcoin mining would be embraced as a leader in technological innovations, showing traditional dirty-energy industrialized sectors the right path to the future. But no, we simply ignore the radical difference in math between a half of a percent and more than 100%. It's, well... let's just say that our governments get paid very well to be famously wrong.

As to their attempt to break down energy use by transactions, it's an unimaginably bad way to attempt to quantify Bitcoin's use, let alone its consumption in mining. While on-chain metrics are PoW based, a ton of the flow of coins land in large reserves, cold wallets, and are transacted on exchanges where value is settled at the end of the day. Lightning Network and other growing L2 solutions do not interact directly with the mining layer of Bitcoin, meaning that the actual use of Bitcoin, as the market grows, will not be centered around a metric of growing energy use, but rather what people do with their finite amount of Bitcoin in the future. This includes DeFi and borrowing against Bitcoin as collateral, since its long term projections are likely to see another 300% if not much more.

It's sad to see what's happening in Australia today. I'd expect it from N. Korea, and even our new administration in the U.S., but I was never previously aware of how far into totalitarianism Australia's government and poorly trained police thugs had gone. So, to learn that an Australian mining company would be providing Texas with, in today's terms, 14% of Bitcoin's total hash rate by 2023, that's quite a piece of irony! In the midst of politically correct virus outbreak posturing, the country touting some of the harshest anti-freedom moves against their public is bringing us a world-standard mining rig, and it is headed to one of our more freedom-loving states. But wait, that's not all!

Texas was in the hot seat last year when an unexpected winter storm proved the narrative that our grid desperately needs upgrading, and there was simply not enough on-line energy to go around. A Texas blackout what not expected, but it proved that we desperately need our states involved in their own well-being with budget directed more at fixing problems than flexing to talking points to appeal come election time.

So, the state with the most to gain in freedom, and the most at risk in energy infrastructure, is going to get a chance at crypto freedom while the bigger argument over clean energy gets an extra year to bloom. This... will be quite interesting.

Consider the fact that Intel is announcing they will be releasing new ASIC chips designed to dramatically reduce the power load for Bitcoin mining. Yet again, indistry finds paths to innovation when it is encouraged and allowed. Perhaps this is even, in part, due to Silicon Valley crackdown on allowing the sales of powerful consumer gaming PCs, which lets face it was really an attack in California politics again Bitcoin mining graphics cards. This is not the way free markets find solutions, but Intel proves where the government tries to close one door, you just look for a window they left unlocked and keep moving forward.

The last point I wish to spend some time addressing, is the idea that this green initiative hoping to lower the banhammer on Proof of Work mining is a bunch of hoopdiedoo, and even more so it is not the role of regulators to pick winners and losers. Ethereum is a Proof of Work token that has already taken millions of dollars in staking for its transition to Proof of Stake. By the way, Gordon is not an anti-Ether maximillian, nor am I in a bubble where I think Bitcoin is the only thing in existence. I'm well aware that there is an entire industry at large. The fact that I lean more and more towards a deep understanding of the importance of Bitcoin's longevity and large portion of the crypto landscape does not force me to see all the world through orange-colored glasses.

There are benefits to the idea of staking protocols. But, the thing is, it really is NOT a solution to steering us away from the energy cost of a network. In fact, let's pretend for a moment that ease, security and speed made it possible for a PoS platform to grow very rapidly and improve fees, guess what is continuing to secure the network? You guessed right, it's a bunch of computers running the transactional software! All crypto is doing blockchain in one form or another. Unless the powers that be (pun intended) are prepared to take into consideration the cost of the entire internet and appropriate accordingly, the reality of this topic is not resolved by singling PoW. It simply is not the answer. Ether is going to be a network that uses computers, uses energy, charges stakeholders and their influence on their protocol by the amount of stake they hold, and this is going to increase the incentive for people with the most money and influence to decide the forward technical groundwork of the entire Ether ecosystem. Like it or not, that is a fact.

I am not overtly anti-PoS where someone wishes to build as such, but the idea that the green answer to PoW is to replace it with PoS is just ignoring the importance of securing a network of computers by using computers that are plugged in, gosh darnit!

So there you have it.

Irony abounds in the world of crypto, and Bitcoin is king of irony on top with cheese. It helps incentivize the entire global energy sector to evaluate how to make efficient systems, seek innovative ways to create new forms of power, sets a standard for other lagging industries to follow in its footsteps, if sustainability is your 'thing', and all-in-all it proves that more than 12 years of energy use and difficulty levels has gotten us to 0.6%. If Bitcoin's role in the global economy continues to increase, it will take a long time to even reach 10% let alone 'all the world's energy lololololololol'. If that road isn't paved with truly innovative renewable solutions, then the governments of the world are simply all bark and no bite.

Thanks for reading. It took a very modest amount of energy to write this, but shouldn't it be enough that I always pay my power bill on time?

For now, Crypto Gordon Freeman... out.