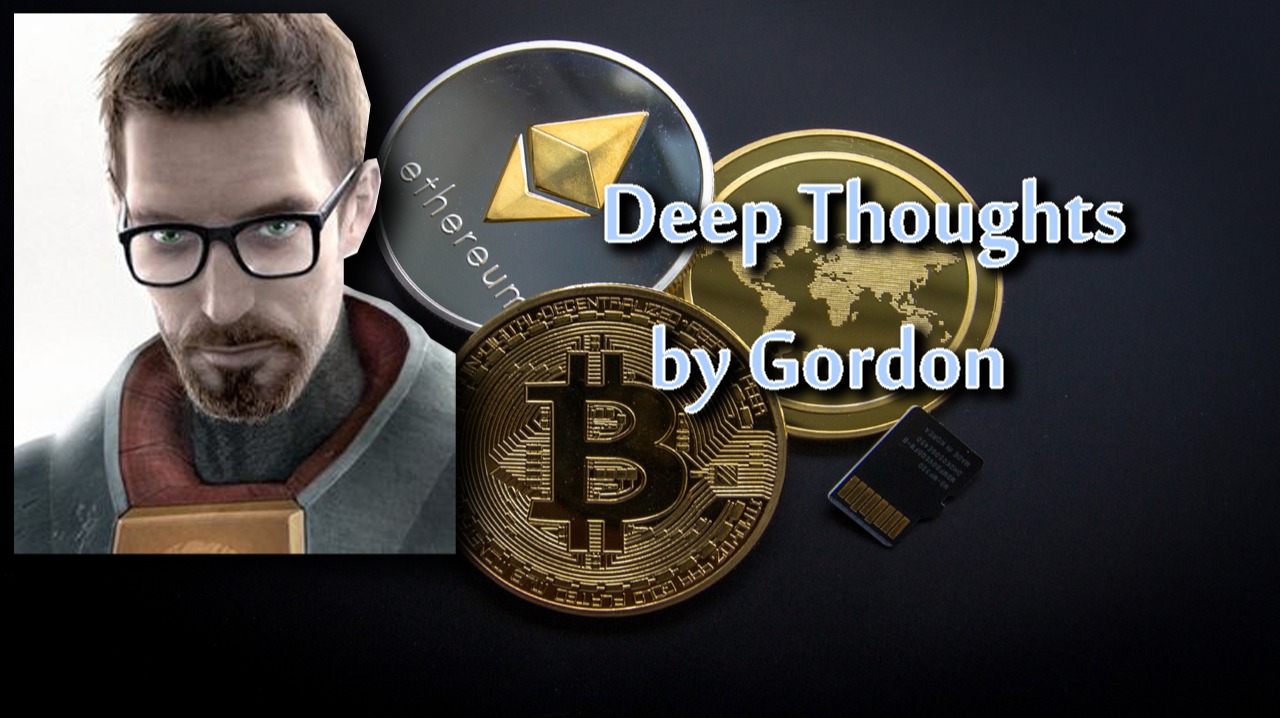 I haven't written in a little while, so it's a new year, and a lot of things are new, and even more things are old.

The topic for today's post is perspective. Perspective is everything.

As usual, this is just about my thoughts and opinions, and who really cares what an imaginary 3D cartoon thinks anyway, right?

So, really since Vitalik introduced Ether and it got hacked, forked into Ether while main chain used Ethereum Classic, there's been talk about "the flippening". There is some confusion about what that actually means, but a person can attribute that to daily volume, daily marketcap, or price.

As it pertains to volume, there have now been a few instances where ETH has flipped Bitcoin. That is to say that there was more trading action on Ether in a given day than Bitcoin. I actually would expect to see a lot of that personally, but there are several factors that affect the likelihood for such a thing. One of the most important factors is that Ether trades with Bitcoin and other stuff trades with ETH and also with BTC, and they both also trade with fiat and stablecoins. Since essentially everything else trades with BTC and with stables, and only some things trade with ETH, it does impact how often ETH is leaving wallets to get swapped or traded to something else. The other element of this is the fact that while Bitcoin's transaction fees aren't the lowest possible, they remain fairly consistent compared to ETH and cheap in comparison to GAS. So, there will always be more incentive to move liquidity around where it is cheap to grab and keep value in profits, while simultaneously, high gas fees are an incentive to leave ETH where it can be swapped or traded, since CEX exchange fees are insignificant compared to the cost of moving ETH to and from private wallets and exchanges.

Bitcoin is the leader in the market by price and sheer volume of trading; that is to say the amount of value in trades and the number of pairs that is spread across.

The flippening in daily trading volume will probably happen numerous times from little doggy coins, other memes and ETH, but until something like ETH is worth 11X it's actual spot price, a true blue flippening isn't likely to occur. And, if something significant were to happen to Bitcoin, say a U.N. ban on PoW for instance, it would take a drastic loss of value and a scare trip-wire into ETH to cause such a move in my opinion.

Second, let's look at what makes for a bear market

In 2020, Bitcoin was strengthening and people were shouting from the rooftops that we were finally in a rally and seeing signs of a real bull market. That was when Bitcoin was climbing up to $13,000 again and people were certain it was going to touch it's $20K ATH again. Hurray! Then, there was this virus thing that happened. I think it was called Covid-19 or something. Kinda obscure now... you really never hear anything about it anymore ;-) lulz.

Bitcoin bottomed at around $3800 and started rising in 7-8% increments. There was a global terror that markets would just keep tanking, because there is no precedent for what happens when all air travel, most road travel, only 'essential' businesses are open (like barbers and liquor stores, for instance) in a modern tech age, and we were even worried about testing the limits of internet bandwidth because everything went remote. Like, why weren't we doing a lot of that anyway?

A $3800 may have been scary, especially for that poor guy that finnaaaaaaallllllyyyy listened to his annoying 'Bitcoin friend' and bought in around $12,850 just before 3 stock crash trip-wire days. We actually had negative oil barrels and I sure wish I were able to get in my time machine, go back, buy up every single Star Wars action figure and never open the package, take the cash put it in Google until 2019, wait, and buy negative cost oil (how does that even work I wanna know!) and then as many $4K Bitcoin as I could get OTC without upping the price. Yeah, I would probably still be writing here, but only because I WANT to not because I want any crypto tips- lol.

Anyway, that was scary, but it was an immediate sign of resilience. Seriously, at the time, $13K was outside of the range of what the price really should have been given the amount of traffic and how few still knew about Bitcoin, and how resistant the banks and bankers still were. There wasn't any massive institutional money to come in and pump the price sky high, so it was really probably fair to say the average value of a Bitcoin at the time was above average at $9K with $13K a hard peak. Dropping to basically half its recent average when oil essentially died for 10 hours is remarkable. More importantly, people bought the dip for weeks until it was $9K all over again.

Now, lets do that perspective thing again. Think of something like, I dunno, Doge. Remember when it was gonna do $1 and then $2? Yeah, that wasn't mathematically possible without $1T in daily volume, but that's a little beyond the pup-math for folks to fully understand. But, let's say we have a $0.40 Doge and people are trying to decide whether to buy some. They spend $1000 and 2 years later somehow miraculously, Elon and friends have changed the code to cap supply and it starts going up in value, first to $1, then 2 months later to $2, and then it starts climbing to $10, $20, $50. At what point should someone sell? Imagine being that person another year later that can't ignore the huge gains and buys 10 Doge at $500 each. They watch the price go up to $750 and then down to $120. Another year later it makes it back up to $750 and crosses $1000 per Doge for the first time. Again, not gonna happen without completely reprogramming it.

Early Bitcoiners have seen that entire thing play out. I remember when Bitcoin was first $1 and the entire mindset was "wow, now it is real money because it is the same as 1 dollar". Imagine just a couple of years later how hard it would be to decide whether to buy Bitcoin for $500. What kind of fool buys a $0.50 imaginary coin for 100X the price? But then, it climbs to $20K! We are now sitting at a lull in the market with a $40,000 Bitcoin and the mainstream economists are talking about what a foolish investor Michael Saylor is.

How many serious investments can peak at $68K, drop under $30K, and maintain constant investors who realize what a huge value that is, when just 13 months prior it was a big deal for it to cross its previous ATH of $20K.

Seriously, none of us know what the next price will be. Not a single one of us. I get tricked into giving a price prediction last year for December 2021 Bitcoin. I knew not to do so, but it was as Bitcoin was hitting over $60K the first time. Everyone was either $100K or $150K EOY. I said $78,941.23 because if I was going to be right, I wanted it to be remarkable and uncanny-lol but I knew better!

If the governments of the world don't screw this up, we will see a $70K Bitcoin and soon. It will not take another halvening for it to happen. We will someday see $250K Bitcoin and $10K ETH or more. But, we may very well see it absolutely tank down as low as $15-20K per Bitcoin. Just keep in mind, that there was a time where $20K seemed absolutely outlandish. It was as absurd as taking a $0.20 stick of gum, chewing it, setting it in your pocket, taking it out a year later and selling it as an NFT to a billionaire for $3M, but it happened. Now, it would be a massive bear market if we ever saw $15K for Bitcoin again. It was only 2020 when the bull was $13K and the nightmare was $3800.

Maybe invest in Pfizer too if you're the devil- lol.

So, today we are looking at a $1.2B 24HRV on Binance for Bitcoin/USDT pair. I like to watch that particular metric because it is a representation of how the rest of the market responds to volume-as-value.

2 years ago, it was a big deal that volume on the same metric had dropped down to $80M. We have been seeing $1-2B BTC/USDT volume consistently for over a year on Binance now, so much that now it is looking bearish for it to only be $1.2B. It was less than 2 years ago that Bitcoin hit $1B volume on Binance for the first time.

Can you imagine telling the person that held BTC since they bought it for 2 dollars, not to sell at $100 or even $1000, and that someday in the near future a small Central American country would be making it legal tender and would stamp "powered by volcano" on their mining rigs? What an amazing world we live in... in an amazing time.

We see global tyranny the likes of WWII and global freedom embraced at the same time. You can't trust medicine, science, politicians, the media and most people are clinically insane at this point, but one thing is for sure; there is a small little bubble of comfort one can take to say "we're all in this crypto thing together" even if technically saying that turns the Bitcoin maxi's against me, and not saying it turns the crypto people against me. You can't win! lol But more importantly, we are on the same page that a revolution is taking place in money, and we have all seen the writing on the wall. Fiat is falling and the rulers of this tyranny are desperate. We now all share a healthy mistrust of leadership at every turn, and we are probably gonna get screwed royally by privacy law and 6G, but who cares if we can just self custody through the storm.

That, my friends, is the kind of perspective we all need to share.

HODL, trade, invest, DCA, and do it in the name of freedom.

And on that note, happy 2022 from Gordon Freeman, the free man, crypto super hero extraordinaire, and all around nice guy... for now... out.