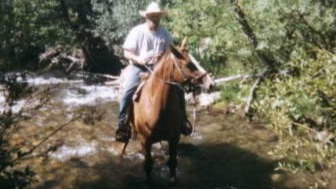 My Introduction to Andy B

My Introduction to Andy B

If there was ever a man who fit the bill of both the proverbial and literal meanings for “Old School” it was Andy B. I have recounted this moment in other works of writing, but it still serves as a poignant example of just how “old school” Andy B. really was.

As Andy B. was a distant relative at best, I had not had occasion to meet him in my youth, though I would be called during my teen years to help my kin blast out a grave and haul the rocks out, and to bring in some fill dirt for cover … so I asked how to get there.

The instructions were such that I remember verbatim to this day, exactly what was said;

“Go back that away and when you crest the third ridge, look off to the left for the hollow that runs up and follow that hollow on up until you hear the dogs barking."

"When you hear the dogs barking, holler out or old Andy B. will shoot you!”

I did as I was instructed, and when I came upon this family living even further back into the mountains than I did, I was at once struck by how surreal and at the same time, how unabashedly real the entire scenario was.

The center portion of the house, as I would come to discover, was more than two hundred years old when I was a small child, and was magnificent in both its simplicity and rustic beauty.

The fireplace that had been built in the original home was large enough to cook a whole hog … I noted that right away as there had been a hog placed on a spit, apparently earlier that morning, and it was now slowly being turned over a hardwood fire, filling the house with a most amazing mix of old and new and life … an indescribable quality and quantity of life that can never be truly expressed with mere words.

Over the course of the years, I would have (or seek out) numerous reasons to visit and even … on rare occasion, find myself working on their home.

Oddly enough, I once came to be working on the center of the home, and found myself trying to drive a sixteen penny nail into a wood beam that had been placed well over two hundred years before my birth … only to have the nail fold in half and fly back in my face.

I found myself even then, recollecting my very first visit to the house, and after getting done preparing for the funeral of one of his cousins, opening a small six ounce, ancient coke bottle holding some of his famous hooch … and even after being warned, strategically holding the bottle so as to make certain I would not be hit, and watching the lid stick in the very same wood beam that would one day spit that nail back in my face, crumpled up and worthless … almost daring me to attempt any further alterations to such a magnificent monument to our nation’s founding and the early pioneers.

As more and more family members had been born, the house extended out from the center. Along one entire side there was a semi-enclosed kitchen that housed all of the makings for Maple Sugar, Maple Syrup and Maple Candy, filling the air there with a peculiar odor that was both very pleasing and somewhat unsettling all at the same time.

Behind this room was a dining room the likes of which can only be imagined. The wood was all dark brown, but not painted, just aged over the years by the many fires that had kept the family warm and fed them.

There were dishes and silver from what must have covered the more than two hundred years the family had been there, and some of it would surely be right at home in museums celebrating the early days of our nation.

There were three hardwood tables in the room, each maybe twice the size of a long, folding table or a little larger still, all placed together and being filled … and just as rapidly emptied by virtual mountains of bacon, biscuits, ham, eggs in all manner and so much more that it would have been impossible to even test all of it.

Much to their chagrin, I declined to eat at that time, as I am by nature, quite a lazy person in reality. Were I to sample even half of what had been offered, I feared I would be good for nothing but sleeping off the meal for the rest of the day.

Three of us had come to the mountain to assist in preparing the ground for the funeral, but my brother and my cousin were easily distracted by the voluminous quantities of food spread out before them and decided to eat first.

I on the other hand, knew how complacent and tired I would become were I to consume even a fraction of everything I wanted to sample there, and chose, along with Andy B., to commence with blasting out the grave.

I would come to discover that he was a very early riser, generally getting up about four every morning and commencing with the work as early as possible, so as to be able to relax during the hotter afternoon hours.

In my mind, I just wanted to dispatch the work as quickly as possible so that I could sit down at that amazing table full of treats and eat away my cares and concerns without worrying about trying to work afterwards.

At that time, Andy B. was already eighty-four years old, but he handled the dynamite with expert hands and placed it just so, blasting all of the granite and other rock into smaller, more manageable stones that we could place in a (massive) wheelbarrow.

Now part of the reason I was so tough when I was growing up, was that I would never allow myself to be faced down or shamed away from work. Quite the opposite in fact. When my cousin dogged me for not being able to haul two green ties at the same time, green ties being creosote treated, green wood railroad ties weighing in at almost three hundred pounds each, I struggled and bled and pushed until I could … never very capably … but could get them up on my shoulders and move them.

Andy B. would have none of that however, and when he saw me tiring … much to my shame … something else which I would never live down, he took the wheelbarrow from me … and it was a massive, home made job that held literally hundreds of pounds of rock … and he wheeled it down the hill as if it were just another bag of goods.

He never strained with the weight or the load, and over the course of the years, would teach me a lot about working smarter and not harder. He would not let me handle the dynamite in those days, though he was the one who actually told me about my dad getting in trouble for boiling the nitroglycerin out of his dad’s dynamite … something which I think my father would never forgive him for.

Still, we took turns filling and hauling that massive wheelbarrow down the hill, and bringing back wheelbarrow loads full of dirt so that we would be able to properly cover the grave when his cousin had been given a proper funeral. He began to fuss a bit as we started working into the afternoon hours.

As best as I am able to recollect, we did not actually finish until about two in the afternoon … something he detested.

On later ventures, I would tend to go to his home on the previous day so that we could commence working at a more proper and early hour in order to be done before the afternoon sun beat down on us quite so ferociously, but I had not been fully prepared or warned on this particular occasion.

My cousin and brother had disappeared after their ferocious foray into the foods available, but showed up shortly after Andy B. and I got done fully preparing the grave site. It was here also that I learned yet another (of so many) lessons as I would from Andy B.

As we sat there at that awesome display of food, now free to eat to our heart’s content without fear of getting sleepy or lazy afterward, Andy B. pulled out these little, ancient, six ounce coke bottles.

My cousin recognized what it was right away, but I had not yet been so privileged. However, since my brother and cousin had disappeared, they were given instructions to deliver a message to their parents regarding the actual funeral.

In short, he was chastising them without chastising, telling them to go back home, in this particular case, to relay information that their parents likely already knew … and while my brother is certainly not a slacker by nature, he knew he had been that day and did not dare to argue the point, especially not with Andy B.

To this day, the hooch that Andy B. made remains the best liquor to have ever crossed my lips. I have had the opportunity to sip hundred dollar single malt scotch and none of them has even come close to the nectar this man had in his house.

He did, thankfully, caution me to point the bottle in a safe direction as it had likely become very potent over the years, and sure enough, when I did release the lid off that little miniature coca cola bottle, it stuck in the very same beam that would later spit back nails at me not even in defiance, but almost, seemingly at least, as casually as you or I would dismiss a mosquito.

As I said, I would often find (or make) occasion to visit Andy B. over the course of the years.

While it is doubtful that anyone will ever share the same stature as my father and grandfather in my life, Andy B. sure does come close.

When people call me old school, I cannot help but to recollect the men I learned from and the stories and tales of their lives. While I hope to be able to share a great many of my stories, do not be surprised if I slip one of the real “Old School” stories in from time to time.

In days of old, I was born a hillbilly and raised a cowboy and a hillbilly. My first wife decided I should give up such foolishness and move to the city ... which I foolishly did. I asked her, do you really want me to give up on "All this? For lack of pay?" - And thus was born Aldis Ferlach O'Peigh. These are some of the stories, and while they may be true, well, you just never can tell when an old hillbilly gets going on a rant now can you?