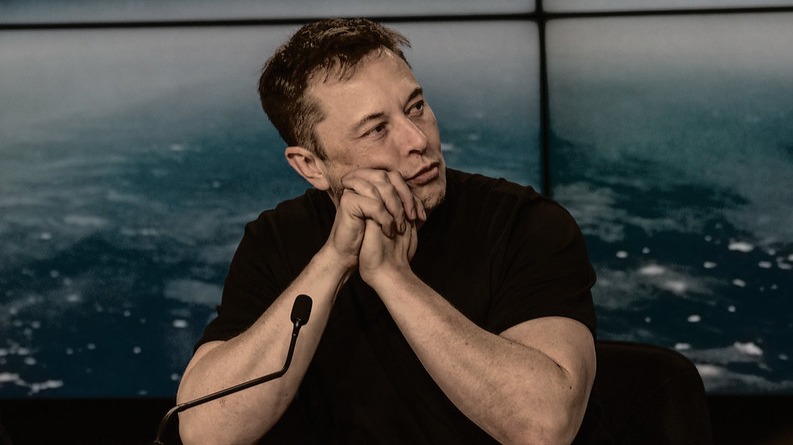 Guys, there's never a dull moment in the cryptosphere, is there? Yesterday, even as we sat back with bated breath, following our favorite billionaire Elon Musk's proposed Twitter takeover, an offer of $54.20 per share which has been met with some angst and resistance from other Twitter shareholders, Tron Founder, Justin Sun, proposed to outbid him, offering $60 per share. And even before we could breathe again from our collective gasp, Cardano co-founder Charles Hoskinson entered the chat, proposing to build a decentralized one. It's been a busy day, guys, and just so that we could all have our cups of coffee ready early today, let's get into it. 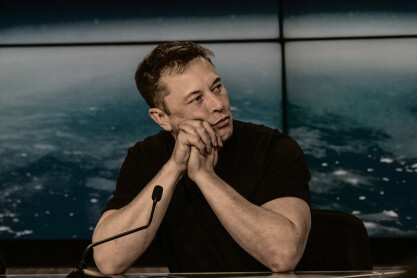 Okay guys, so for a quick recap, at the beginning of this month (April 2022), Tesla CEO, Elon Musk bought a 9.2% passive stake in Twitter for approximately $2.9 billion, a move which, for a brief moment made him the largest shareholder on Twitter and caused many to sit up and wait for the next shoe to drop since few of the billionaire's business moves are ever anything but strategic.

A CNBC article quoted Wedbush analyst Dan Ives predicting that Musk's move might precede a more aggressive stance on Twitter: "This eventually could lead to some sort of buyout."

A few days later, Musk turned down the offer to join Twitter's board.

The writing was on the wall, and it came as little surprise to anyone when Musk returned a few days later with an offer to buy the remaining 91% of shares at Twitter. Valuing the company at $43.4 billion, Musk offered $54.2 per share in cash, a price which he called his best and final offer, and he hired investment bank, Morgan Stanley, as financial advisor for the takeover.

According to Crypto News Flash, a snippet of Musk's statement to Twitter's board read: "I am offering to buy 100% of Twitter for $54.20 per share in cash, a 54% premium over the day before I began investing in Twitter and a 38% premium over the day before my investment was publicly announced. My offer is my best and final offer and if it is not accepted, I would need to reconsider my position as a shareholder." Talk about money moves, right?

Anyways, as can be expected, guys, Musk's offer sent the business community and Twitter-verse wild. There were some who praised the effort and there were others who feared that if Twitter were to be made private, it would be treated like Parler, another microblogging site championing free speech which failed to gain traction and was removed from the Google Play store and, temporarily, from Apple App as well because of controversial statements by users.

Players in the crypto industry joined in the conversation with Justin Sun proposing $60 a share and commending any efforts to make the platform crypto native and web3 friendly...

And, of course, Charles Hoskinson offering to build a decentralized alternative if the offer to buyout Twitter fell through.

And guys, just to segue here for a bit- I love Cardano, believe me, I do, but I couldn't help chuckling at some of the user responses to this offer. Man, the trolls were out. To be clear, there was a lot of love and support for this offer, but in-between them, you'd see tweets like this, that would really floor you.

Over at Twitter, members of Twitter's shareholding board were not at all happy with the turn of events.

Musk, refusing to be daunted, replied... 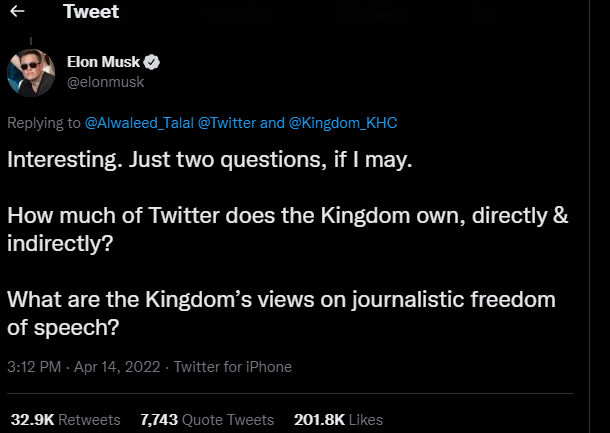 It's been a day, guys. It's been one of those head spinning days. Suffice to say, the company’s board is also reportedly not willing to accept Musk's offer, though they have committed to consider it. Musk, in typical style, is taking the vote to the public.

By the way, did you vote?

Anyways, guys to bring all of this to a close, as we continue on this ride today- man, if driving in a Tesla is this exciting, I must own one before I die- Business Insider is telling us today that Elon Musk is no longer Twitter's largest shareholder since asset manager Vanguard Group increased its holdings on April 8th and now holds a 10.3% stake.

Who knows, guys? It appears as though the billionaire himself is uncertain. He confessed as much during an interview yesterday with TED chief Chris Anderson at the TED2022 conference in Vancouver, Canada. Should the deal not go through, however, Musk's days at Twitter are likely to be numbered as he has promised to dump his shares and walk away. Axios has a great breakdown of the Musk interview here.

So guys, what are your thoughts on this development? Do you think that Musk's attempt to takeover Twitter is pure and in the interest of free speech, or do you think that the bid is driven by self interest? And whatever the underlying factors, do you want this bid to succeed? I'd love to hear your views on this. In fact, guys, I'd love to hear what the CEO of Square, Jack Dorsey thinks, right? Remember this?

Anyways, guys, that's it for me today. I'm off again in search of another story to bring to you. Until we meet again, my friends, please remember to be safe. Arrivederci!