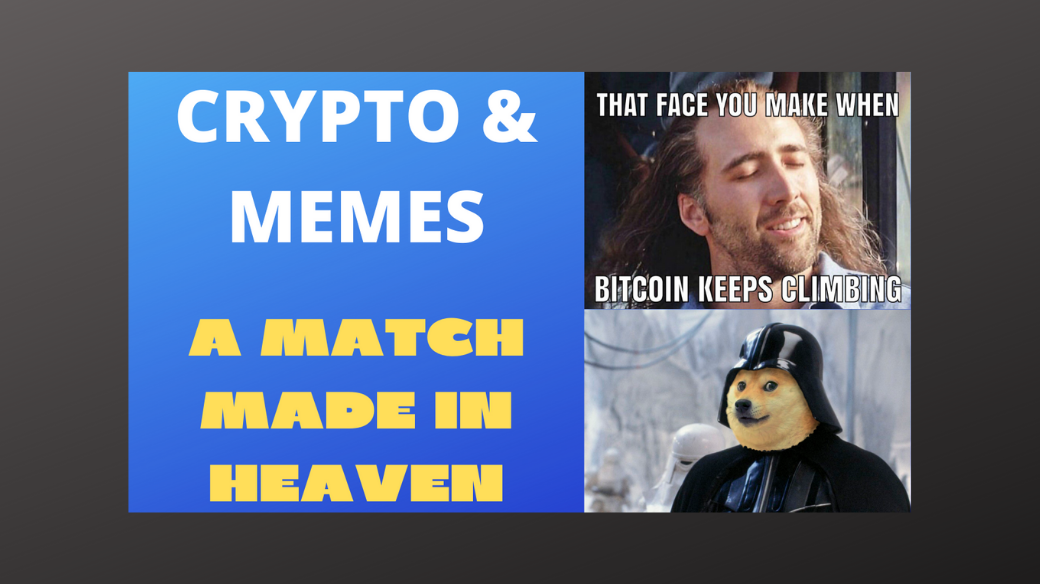 Crypto And Memes - A Match Made In Heaven

Crypto and memes go together like cheese and a fine wine. Like bacon and eggs. Like strawberries and cream. Like Pepe the Frog and anything. Like a phatty boom batty and 'The Big Lebowski'. You get the picture. Meme magic is real. The power of the meme is real and certain crypto communities have harnessed their strength to catapult their favorite coins into the stratosphere.

Studies have shown you are six times more likely to have a message imprinted into your slightly-evolved chimpanzee brain if it's paired with a relevant visual rather than text alone. A genius meme can go viral in minutes, seconds even. It’s an art form. You either have it or you don’t and 99.99 percent of people don’t. Memes have to be perfectly pitched. They also can’t be disingenuous or people see straight through them.

Memes in cryptocurrency. They’ve been around since the inception of Bitcoin. More than a decade ago. Putincoin, Trumpcoin, Memetic, Pepe Cash, Banano — all meme coins. Maybe you’ve heard of them, but none of them would be around today without the granddaddy of them all: DOGE.

The coin with the logo of a Japanese breed of dog. The memes — especially in the early days — where plentiful, but were often accompanied by a bunch of multi-colored amusing words in the Comic Sans font. When DOGE first hit Coinmarketcap in December 2013 it had a market cap of less than TWO million U.S. dollars. As of the time of this post, it has a market cap of almost 300 million U.S. dollars. At its all-time high, DOGE's market cap was an eye-watering two billion dollars.

The DOGE meme that got the ball rolling goes back to a photo taken by a Japanese teacher of her dog in early 2010. One particular picture stood out from the bunch she took and the rest is history. It helped propel DOGE to the internet masses. The dog in said picture is glaring in a sideways direction with oddly-raised eyebrows. Some have described the photo of the confused-looking dog as a "canine Mona Lisa". People wondered what might be running though the mutt's brain so the dog’s thoughts became instant memes.

The founders of DOGE chose the meme as the basis for DOGE a few years later and it blew up. A couple of fun facts about DOGE is that they even sponsored the Jamaican bobsled team and a NASCAR driver. A fully-decked out DOGE car. Classic.

While Bitcoin was tricky to mine and becoming ever more expensive (if only they knew), DOGE ascended to become the go-to fun cryptocurrency, and a huge community developed around it, driven at the time by Reddit, but later picked up by /biz. You want cheap and super fast transfers between exchanges? DOGE is still a good bet and even to this day, if you catch it at the right price — good for a sneaky double up.

The best thing about memes is that they can attract more "normies" into the world of cryptocurrency. While Bitcoin and mostly DOGE were the early meme magnets, today that mantle can only go to one project. Yup. You guessed it: Chainlink.  The LINK community have taken the ball and ran with it. It's on another level. The sheer amount of creativity helped propel LINK to one of the world's top cryptocurrencies.

And unlike DOGE (I like DOGE FYI) LINK had the tech and the backers to make the memes a self fulfilling prophecy. It’s funny looking back at posts from late 2017 of people asking if LINK is (quote) “just another meme coin”. They must be sick, if they passed on that basis. To be honest, Chainlink's famed anti-hype policy and its stony-faced, plaid shirt-wearing founder make it the perfect project to meme. Marines, frens, 1k end of year, Sergey in various garbs. Too easy and too much fun.

Of the other classics, who could forgot the Bitconnect memes? Pink Wojak, the Bogdan twins, the Bitcoin sign guy behind then-Fed Chair Janet Yellen “Buy Bitcoin”, the 'IN IT FOR THE TECH' Indian guy clad entirely in gold, Heavy bags man, Wen lambo?, the before crypto/after crypto memes, Harold, the computer kid, the list goes on and on. Long may it continue.

Not DeFi? Not about a particular crypto coin? It will probably be in here. Thanks for the support, you gorgeous people!