XRP Has Crashed by 40% on an Exchange, Coordinated Sell-Off?

XRP owners may have been hit with a small heart attack after reading that the XRPBTC trading pair on one exchange had crashed to 40% of its value. However, in reality, there is NOTHING to worry about at all. The exchange was Beaxy, a very small time exchange only recently launched in June this year. Beaxy had reported that they had seen a sudden surge in XRP trading volume which was followed by a large sell of that resulted in XRP/BTC CRASHING and reaching well beneath 1000 SATS. Peep the damage below; 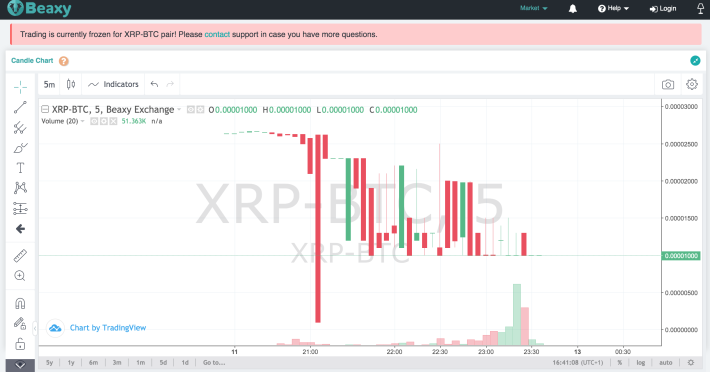 As you can see, Beaxy has now suspended all XRPBTC trading and have even identified the problem and have implemented a fix. According to their statement, they said that they were affected by a XRP partial payment exploit on August 12 which had allowed the attackers to gain the advantage. They were cute enough to mention that it was not only their exchange that was targeted.  Anyhows, they have identified and implemented a fix and will roll back relevant trades on the exchange to the moment that the threat was identified.

They have also stated that they will be crediting any funds “misappropriated” so users funds seem to be safe. Furthermore, they mentioned that they will be finding individuals responsible in the attack through their KYC process and action will be taken.

So what is this...really? Is this some form of FUD to spread against XRP. Considering the fact that pretty much nobody has heard of this exchange but it has made headlines amazes me. The 40% price drop (or whatever percentage) was not nearly enough to make any sort of impact on the overall XRP market.

It seems to me that this could either be a great marketing campaign either to spread FUD against XRP or to promote an exchange that nobody has heard about (I guess it is working). What do you guys make of this news?