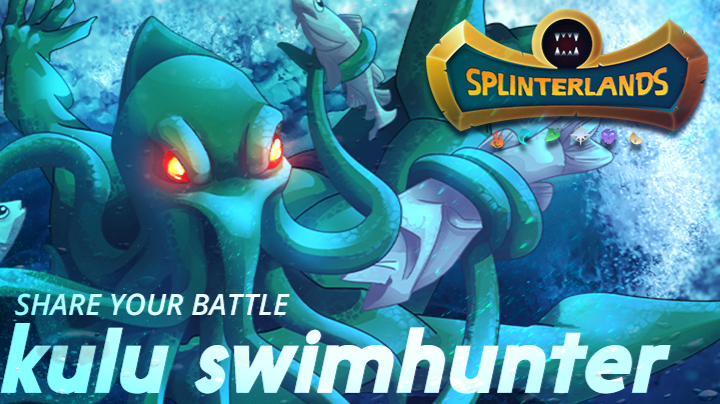 If you haven't already, start to play Splinterlands using my referral link! Where have I been?

Hey everyone! This is my comeback post here on the peakd/hive after a rough 6 months in my personal life. Now that I'm trying harder to get back on my feet, a couple of "share my battle's" can´t do any harm and it'll be good to take off the dust of my keyboard. It never hurts to earn crypto while doing so. After a long while, I finally decided to log in to all hive interfaces and games and see what was up with it. Thankfully, as it seems, it is still running strong, and better than ever. There is some exciting news about 20% annual interest rates being decided for HBD.
Aside from that, I was surprised by how easy it was to set up my account on new devices I had, both for Hive and Splinterlands. Since I had my login and keys stored safely, it was almost an instant process. Pretty neat!

Splinterlands after six months and Kulu

My account sure missed me. It's been ages since I even opened a chest and it was back to the novice rank. However, I'm trying to be as optimistic as possible, and I'll take the opportunity to use this challenge to help me get re-familiarized with the game and to climb the ranks again. I honestly did not remember if our friend Kulu Swimhunter was any good, but I was happy enough to find out it is a base card of the water set - one of my favorites to use! I decided not to buy/rent any cards and got straight into battle.
Kulu Swimhunter, despite my concerns, is a pretty decent card. It's a 2/4 ranged attacker with not-so-great speed. From my experience, these cards are best suited for back positions, but usually don't work that well as your last man.

Check out the battle here

Man, it's been a while. no time to wait though. It was a mana-high all-types-allowed match. I prefer those, as it gives me more freedom to work around possible weaknesses and focus on synergies.
I decided to go with the oldest trick in the book when it comes to splinterlands: a heavy tank in the first position covering the ranged attackers on its back. Overall, this is not a recommended strategy. If the first defense crumbles, the whole team is rendered defenseless and you are likely to lose. However, considering I'm back to novice and I wanted to play along with Kulu's strengths, this was an easy and replicable starting point.
Moreover, since his deck would most likely be a fire one, I suspected that it wouldn't have many tricks and I could get away with this simple strategy this time.

After all, this was the initial setup for the battle: I tried to come up with an allrounder team, focusing on good stats and good defense cards for the first and last positions:

From the looks of it, the battle would be a close one. Both of us were using heavy tanks in the first position and most of our cards would attack only them. In that regard, my opponent had an advantage as well, since his tank also had a shield, and would most likely last longer than my squid friend.

However, after a more meticulous analysis, we can see that factors would work together to bring me this victory: After I got the first blood with my pela
cor bandit on his flank minion, it was basically game over. My creatures were healthier than theirs and, because of his fatal mistake, I had more attackers per round.

Surprisingly enough, Kulu Swimhunter was not the star of this game. He would only be the one to chip away at the enemy's health little by little. with his solid health, however, he did so throughout the whole battle, racking up a lot of damage.

Kulu was even able to get a finishing blow on his second to the last minion: After the first two balanced rounds, my team was able to easily dominate and I finally could claim my first victory after months of not playing. It's good to be back!

Thoughts and What is next

There is a good lesson to be learned from this battle in particular. Even if you build a team around a specific minion, they will not always be the stars, and that's what splinterlands is all about!
We never know what the opponent will bring to the table, and, because of that, we need to build the most with the least we have. Allrounders teams are great for day-to-day playing and are decisive to have a good winning rate.
Kulu might not have been the center of attention this time around, but he was there and if the opportunity presented itself, he could be a game-changing piece of the puzzle that is every splinterlands battle.

I'm glad to be back at posting on Hive and hope I can finally get consistent with it. Hope you guys enjoyed it and I look forward to receiving any feedback. Comments and upvotes are always greatly appreciated!

A blog from a recently interested crypto enthusiast. Sharing my progress on multiple play2earn games, such as Splinterlands and Rising stars!