Current State of the Democratic Primary 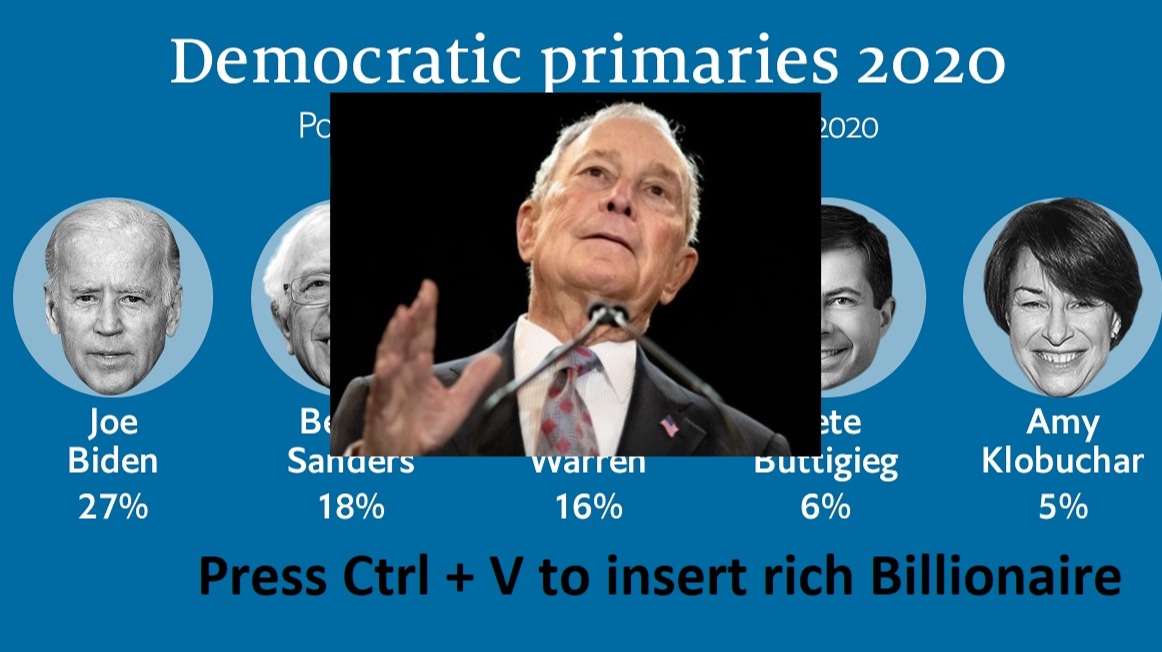 Current State of the Democratic Primary

A Week ago, i wrote a quick opinion on Mikie and the Democratic Party, See it here LINK:

Well looks like everything I perceived is working out as I thought.  Sanders and Warren seem to think so as they have seemingly put their differences aside and are now attacking all things New York and billionaire.  I am guessing they are really starting to feel the heat themselves.  It's bloody hilarious! Looks like the Democratic Primary is going to come down to a old white socialist and an old white billionaire with historical ties to the GOP!  What universe could you make this stuff in!?

I really don't like Socialism, I really think Bernie's platform would be disastrous for the country.  The problem is, I think the only other legitimate candidate, Pete Buttigieg, is too meek and to young to really do well.  But Bloomberg scares me a little.  I am sure he wouldn't be as bad as Bernie....but Bloomberg does scare me on a different level.  He is so rich, why does he want to run for president?  The only thing I could think of is he is power hungry and wants to change the US to his vision of Utopia.  I am Libertarian, I just want to be left alone to waller in my freedom.  But, Bloomberg has made his positions clear with instituting freedom stifling regulations or laws.

Just take a look at a few of his "plans" - evil plans.

1.  All in Economy:  A little one size fits all socialism with minimum wage  -- capitalism will find a way to adapt by cutting the number of low wage workers with automation (they are already proactive doing this by the way) ....Connect rural communities - the city folk are going to have move where the food is after the democrats outlaw coal and oil!  Food will be to expensive to transport to the east and west coast and they will starve!

2.  Career and technical education:  Talks about transition to clean energy in the coal regions of West Virginia   ------ But not how or what other energy source they advocate for!  Wind and solar ain't going to cut it!!!!

4.   Climate:  full de-carbonization as soon as humanly possible and before 2050, ....ensuring 80% clean electricity by the end of his second term of office.  Holy shit everyone better by a farm and start learning to grow crops and raise animals.  Otherwise 70% of the population is going to starve to death --- maybe that's the idea, with a much smaller human population we will not have to worry about global warming.

5. Health Coverage:  The first step is to create a Medicare-like public option — health insurance that would be administered by the federal government but paid for by customer premiums.  YEAH!  welcome to the DMV.  Take a number and wait 6 months for us to figure out if it is cost effective to provide you life saving treatment.....oh wait 6 months after that for an opening due to the lack of doctors.

7.  Veterans:  I just threw up in my mouth with all that B S and promises of stuff he can't feasible control, or provide.

I can't read any more of his junk right now I am dumber for what I just read.

Bottom line:  his plan's are not plans - just a wish list of what he wants do to.  A plan is a feasible method of implementation.

So I will be here super Tuesday watching, waiting to see if it will be an old socialist or a old white super rich business man looking to mold the country to his whims.    Dang! what happened to the Democratic party!  To bad the democrats crucified the moderate candidates.

Primarily my opinion - and rants - of anything. I do enjoy geopolitical. Especially in terms of economic and conflict.