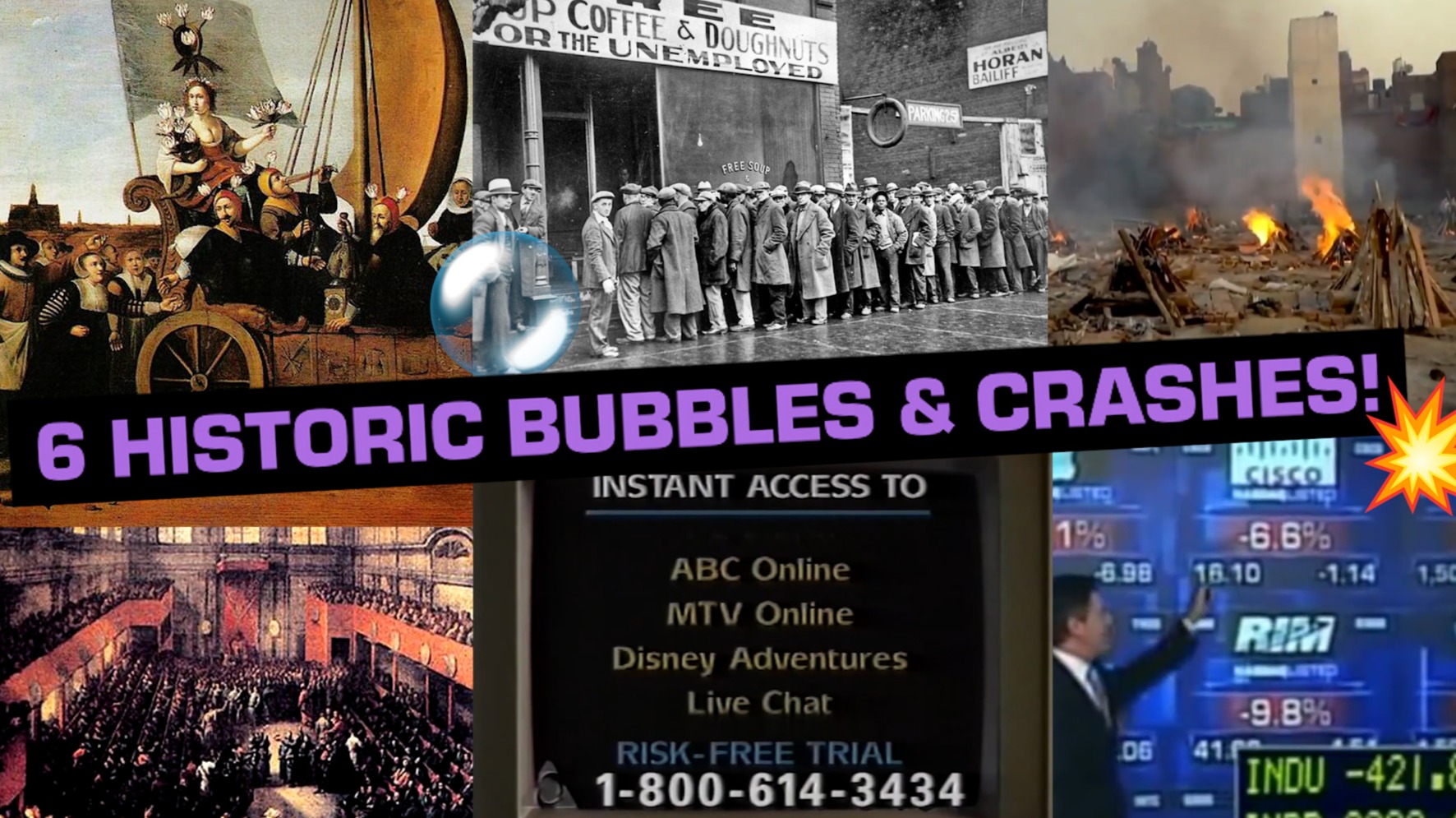 What can investors learn from these 6 historic Bubbles and Crashes in the Stock Market?

You can also watch the video on 6 Historic Stock Market Bubbles and Crashes.

According to the Greater fool theory, investors or the fool purchase assets with the objective of selling the asset at a higher price to the greater fool.

Excessive speculation drives the price of an asset up, causing a bubble as more investors flock in. Once prices become unsustainable, without any new buyers the prices collapse as investors try to cash out as quickly as possible. Mass selling drives the price of the asset lower than its fair value leading to a crash, which is what usually follows bubbles and manias.

In essence, bubbles and manias are terms used to represent overly inflated prices of assets. Crashes are generally the consequence of excessive bubbles or manias and represent underpriced assets. Charles P. Kindleberger studies the history of bubbles and crashes in his book ‘Manias, Panics, and Crashes: A history of Financial Crises.’

The best time to sell shares or assets is during peak bubbles and buy shares during peak crashes. However, investors can’t time the market.

“Never catch a falling knife” is a popular saying in the stock market. Investors should never try and buy an asset who’s price is falling because they don’t know how much further the price could fall and for how long. An investor should wait for the falling knife to fall down before trying to pick it up, similar to a stock that has stabilised in price in a falling market.

Some of the common characteristics of bubbles and crashes include a sudden burst of new market participants, a drastic rise in prices, new or innovative technology, higher financial ratios compared to historical ratios, a higher use of debt, and lending to borrowers who do not have the ability to repay.

For context, in the last 2 decades, we’ve been a part of three economic crashes which included the dotcom crash, the financial crisis, and the COVID pandemic. Let’s take a look at some historic bubbles and crashes.

The South Sea Company was established in the British Empire with the primary business of exporting slaves to colonies in Spanish America. Speculators bought shares in the company with the hope of lucrative profits, which wasn’t the case. The company had a share price of 128 pounds in 1720, with the price rising to 1000 pounds later in the year, before falling back to 124 pounds. The company was valued more than twice of the land in all the British Empire. By the end of 1720, the bubble burst with several investors losing money. Sir Issac Newton (formulated the laws of motion), and Jonathan Swift (author of Gulliver’s Travels) lost money buying shares in the South Sea Company.

The tulip, a bulb flower, was introduced into the Dutch empire through trade. The bulb flower became extremely popular among speculators who started to pay higher prices for the plants in 1634. Investors also had futures markets for trading tulips in the Dutch empire. By 1637, the prices of tulips crashed, leaving a few investors with nothing but tulip bulbs which were now worthless. Tulip mania is the oldest bubble in this list, but did not have a global impact as the other bubbles did.

The roaring 20s refers to the 1920s right after World War 1, where cities in Western countries enjoyed considerable economic, industrial, and cultural growth. In 1929, the stock market in Wall Street crashed after several years of excessive speculation. The crash resulted in an economic depression that lasted for more than a decade, and impacted almost every other country in the world. The Dow Jones fell more than 25% over the course of the first two days and the next time the Dow Jones Index returned to prices in 1929 was in 1954, 25 years later.

In the 1990s, every company that had a website saw its valuations rise because investors saw technology as a source of new revenue, sales, and profits. From 1995 to 2000, the price of the Nasdaq rose to over 5000 from 1000, a 5x rise in the index. In 2001, the bubble burst with the price of the index falling back from 5000 to 1139, a fall over 76%. Even good companies such as Oracle lost over 80% of the share value brought on by the crash. Investors who managed to get good companies at low prices (value investors such as Charlie Munger and Warren Buffet) made profit. The next time the Nasdaq would surpass its previous high set in 2000 was in 2015, after 15 years.

The real estate bubble was a rise in prices of property in the USA, lending to high-risk borrowers, and bad practices in the banking and investment sector which led to the 2008 financial crisis. Lehman Brothers, IndyMac, and several other big names too big to fail went bankrupt. The rating agencies were complicit in giving out good ratings to high-risk bonds. The movie ‘The Big-Short’ depicts the financial crisis and events leading up to it. Mark Baum, Michael Burry, and Ben Rickert managed to short the market and make considerable profits because of the 2007 financial crisis.

The Covid19 pandemic caused stock markets across the globe to crash around April 2020. Most investors saw restrictions in travel and economic activity as signs for declining GDPs. Several investors cashed out causing the markets to fall from (Nifty fell). The NIFTY index then climbed back up by the end of the year with a boost in pharmaceutical stocks and technology stocks. Investors that had enough money during the dip and bought the dip managed to make a profit in less than a year.

Helping investors navigate the murky waters of investing in crypto and other assets. Don't forget to sign up https://www.publish0x.com?a=MvbmQpXpbY