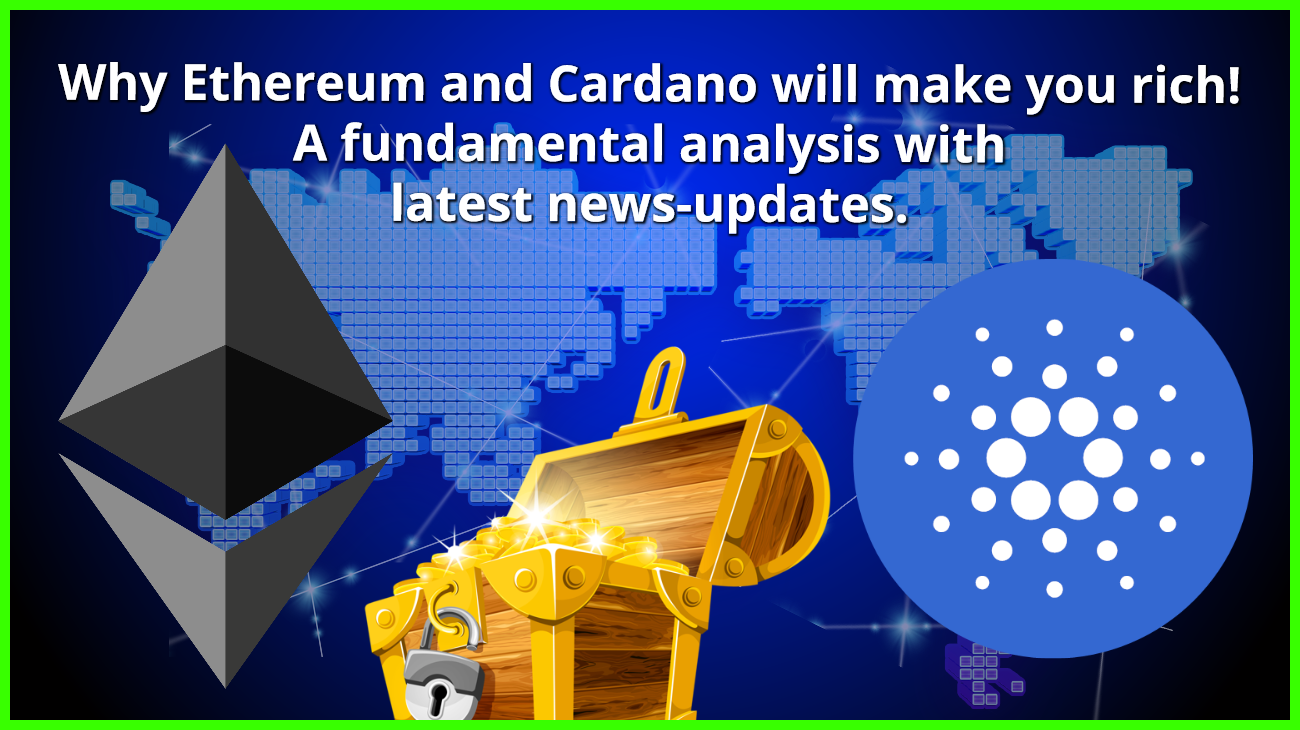 Why Ethereum and Cardano will make you rich! A fundamental analysis with latest news-updates.

The recent crypto correction was a surprise to the newbies, the weak hands and traders, yet the hodlers will prove to be right, again... Assuming that this dip was another much-appreciated moment for people to scoop up some crypto's on sale, let's dive into the two main smart contract platforms and make some comparisons...

But first, and very short: Bitcoin.

The leading cryptocurrency by market dominance (48,4%) and market capitalization (+- $1,000,000,000,000), Bitcoin, is most likely aiming towards $100,000, which will most certainly push several hands to take profits. The consensus is that Bitcoin can be regarded as a reserve asset, comparable to gold, but then even better, and perfectly designed for the internet of value. This leaves room for a 10x push to have a market share equal to gold's $10 trillion market. And while the printing presses have been printing, gold hasn't moved. Is it true that gold-bugs are capitulating and embracing Bitcoin? Or is the gold market ready for a new wave higher towards $2,500? Only time can tell, but Bitcoin is and remains the fastest horse!

Ethereum gets more attention with the European Investment Bank (EIB) launching €100 million in digital bonds on the Ethereum blockchain.

The second largest cryptocurrency by market dominance (15,4%) and market capitalization (+- $300,000,000,000), Ethereum, is attempting to pass the $3,000 mark and is gaining momentum versus Bitcoin. Ethereum 2.0, the much needed and anticipated upgrade of the network, will allow it to become the clear leader and the biggest network by far on which almost everyone is building applications. Ethereum has the first mover advantage and enjoys the network effect that allowed it its number two position since its inception.

Despite its high fees, the Ethereum ecosystem still holds the promise of bringing decentralized finance to the masses, including the 3 billion unbanked. The DeFi market still needs to become more secure as transparency, decentralization, assurance and low fees are needed for its future use-cases. Despite the setbacks, Ethereum remains the home for the +-$125,000,000,000 DeFi market and keeps growing. At the heart of this monster is the Ethereum Virtual Machine. At its Achilles heel: high fees!

Despite its challenges, the world has started to invest in Ethereum, as more and more wealthy and smart money is allocating part of its available resources into Ethereum, for example by investing in ETH ETF's. After Bitcoin, Ethereum is now being scooped up and for good reasons: bigger players like the European Investment Bank (EIB) are starting to use Ethereum, for example for the issuing of digital bonds on the blockchain. The EIB, the lending arm of the European Union, is using Ethereum's distributed ledger technology for the registration and settlement of its digital bonds. And for those of you who like to know an interesting fact: this is happening in collaboration with Goldman Sachs, Santander and Societe Generale. Just to make a point. I expect more news from the global bond market if the EIB's pilot project succeeds to profit from Ethereum's better settlement, custody and transfer capabilities.

Cardano is another much-anticipated smart contract platform and one of the third generation. It uses Proof of Stake as its consensus mechanism, is more decentralized than Ethereum and 100 times faster. This according to Charles Hoskinson, whose focus is economic inclusion and economic identity. The Cardano (ADA) network went live in 2017, and solved several generation-2-blockchain issues, among which the ability to create a treasury system to pay for the system's own growth, providing it to support its current testing and peer-review system that allows it to profit from the input of universities (Athens, Edinburgh, Tokyo and Wyoming), research centers and top PhDs worldwide.

In his own words, Hoskinson wants to keep the good blockchain stuff such as programmability, instantaneously being able to teleport value, and decentralization, but on a scale for billions of people, whilst being able to govern itself and pay for its own maintenance and development bills.

All of Cardano's research papers went through peer review at Computer Science Conferences (such as Crypto, CCS, and EUROCRYPT), the 'gold standard' of the computer science field. So Cardano initially moved slowly, but was able to fix a lot of broken windows by mapping out the complete crypto industry's strengths and weaknesses by putting in the hours of academic research. Furthermore, Cardano also brought in the top guy in the world for every aspect of its project, and built a framework of science that is now being transformed into a workable product.

Cardano actively works with governments, bringing millions of people into the cryptocurrency space by setting up public private partnerships with governments, providing their people with identities, settlement systems, payment systems, voting systems, and property registration systems. With 3 billion people under- or unbanked, the demand is huge. Will Cardano become the settlement layer of the future?

Disclaimer: This article is not financial advice.