An animated non fungible token (NFT) of the perceived image of Satoshi Nakamoto sold for 14.21 ETH on the OpenSea platform.

Produced in a cubist style, the intriguing image appears to break apart and reveals a stylised glimpse of the birth of Bitcoin.

OpenSea describe the painting as "While Picasso paints a figure and an animal separated by a bitcoin ‘B’ on glass a cubist portrait of Satoshi shatters and shards apart over top of him in the geometric shapes that create the painting. Somehow the work of art reassembles itself but this time with the portrait of the important French art dealer Ambroise Vollard in the place of Satoshi. Subsequently, Vollard shatters and falls to the floor leaving a somewhat amused Satoshi underneath with a rocket launching and a ‘21’ rotating across the painting surface. Say hello to Cubist Satoshi."

The revolutionary style of Cubism, influenced by the later work of Paul Cézanne, took the early-20th-century European art society by storm and was employed by many famous artists such as Pablo Picasso, Jean Metzinger and Robert Delaney.

With Cubist Satoshi, in choosing cubism and mirroring the colour pallet of Picasso and co., artist Trevor Jones has evoked the past and still provided a fresh view of the beloved - but probably imaginary - creator of Bitcoin.

Jones' webpage carries the tagline "WHERE ART MEETS TECHNOLOGY" and he clearly intends to continue to meld the two elements into one.

His previous work has included a more conventional paint on canvas approach for Ethereum-related inspirations, which foreshadowed his inclination towards cubism. 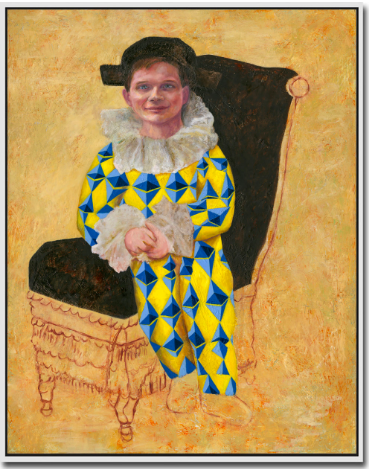 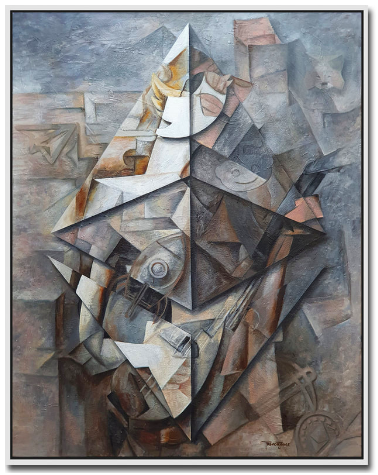 According to Jones, he discovered QR codes in 2011 and a year or so later he became one of the first professional artists in the world to incorporate augmented reality (AR) with an oil painting.

Since 2017, he admits to being "...consumed with cryptocurrency."

For the same exhibition, Jones took an edgier stance on the evolving situation in Venezuela and the Government's attempt to launch the Petro digital currency despite the locals preferring true cryptocurrencies such as Bitcoin.

The 2018 video uses news sources to portray the collapse of the Venezuelan currency and contains the line, "The Government has printed so much new bills that the existing ones are practically worthless... and that has led Venezuelans to turn to Bitcoin"