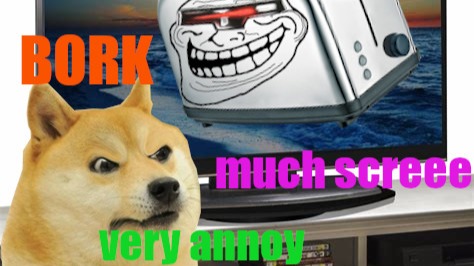 Why Your Doge BORKS at TV Commercials

Ever seen a dog go completely postal at a TV commercial? Guess what - it's not because dogs know communist propaganda when they see it. It's because both your dog and your phone can hear something you can't: Ultrasonic beacons. Maybe your dog was trying to warn you about an imminent threat to your privacy, or maybe the noise just hurts the poor critter's ears. Either way, now you have yet another reason to mute those stupid commercials... or how about ditching cable altogether because the content is a bunch of repetitive drivel that couldn't be any worse for your brain if it was literally designed to make you stupid? Seriously, spend half an hour reading a few blog posts and you've already had more entertainment and intellectual stimulation than a whole week's worth of soap operas and commie-funded "news." That's efficiency, people!

Anyway, some time ago some enterprising advertisers thought up a clever way to further invade your privacy on those dang phone games (and probably a lot of other apps) by listening for ultrasonic signals sent out in certain advertisements. It's clever. An ad on TV or a poster in the store sends out a unique identifier as an inaudible high-pitched noise, your phone hears it, and presto! That ad's unique identifier matched with your Google account, advertising identifier, or some sort of device fingerprint. Now the advertisers and data brokers all know you were exposed to that ad, and they either know what channel you were watching, or exactly what store you were meandering through. There's a good chance that's how Google knew to serve you ads about lawn equipment after you got home from the hardware store. There might have been an ultrasonic beacon hidden in one of the shelves you lingered near. Talk about creepy.

Okay, so I said your phone is listening, right? Well, that depends. If you have Google Play Services, and they have access to your microphone, it's open season. There's no way to know how much or how little Google actually listens. Even without Google, there are apps and games that do the same thing if they have access. Think social media, random games that request microphone permissions for no reason when you install them, etc. If you haven't had "the talk" from a privacy- or security-literate person yet, here it is: "Minimize permissions." That means shut off stuff you think an app doesn't need, even if the app complains that "tHiS aPp MaY nOt WoRk PrOpErLy WiThOuT tHiS pErMiSsIoN." Does your calculator app need access to your real time location? Does an informational app about plants need access to your camera when the app is closed? Does your social media addiction need access to your full DNA sequence? If something you need quits working, you can always turn a few things back on. Most apps will prompt you when you try to use a feature that you've hamstrung by disabling permissions.

So those are the uses we know about for ultrasonic beacons. How many other uses might we not know about? What about apps listening to other apps? There's no reason that wouldn't work. Is your second cousin twice removed melting his junker phone trying to play Fortnite on it at a family gathering? Well, if Epic really was a spyware company, they could program his phone to emit an ultrasonic beacon along with all that smoke coming from the battery. If you were using a phone or app capable of receiving it, suddenly all of China would know you associate with toxic preteens who scream into their microphones when they lose. They might even know which toxic preteen, and his awful K/D ratio. Talk about embarrassing! 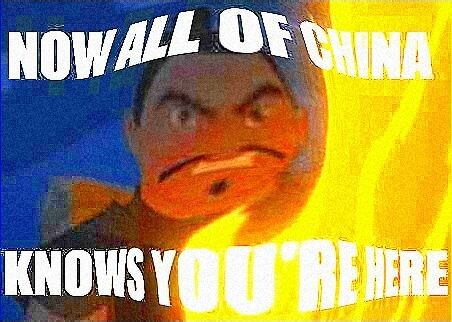 Some guy wearing a tinfoil hat also told me the government could use these beacons to figure out who suspected terrorists hang out with, so if you're friends with someone who secretly likes pineapple on pizza, welcome to the no-fly list. We can't have pizza terrorists screwing up the in-flight meals, right? Governments could also plant beacons like this in areas where protests are planned. Needless to say, this could lead to some undesirable outcomes, so if you're on your way to protest state-sponsored pineapple pizza, just play it safe and leave your phone at home.

Did I mention leaving your Bluetooth turned on can do some really similar things? I'll have to write about MAC addresses another time.