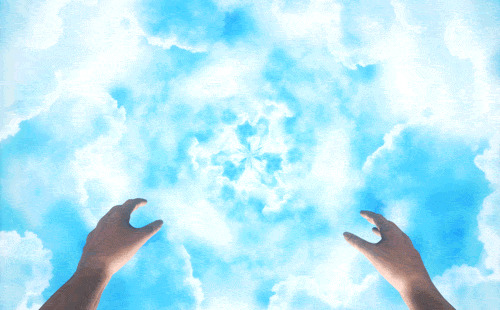 Hello friends, following the continuation of my previous publication, if you have not read it I invite you to read it, I thank you in advance for your great receptivity, support, and comments, I continue to share my experience.

The moment I began to feel emotions, I lost the equanimity necessary to achieve the objective of meditation, I could not feel any good or bad emotion, I should not have any thought and they came to see that the pain I had disappeared, reaching the joy and thought of having achieved it along with amazement, seconds later came the unexpected, something I had never experienced, something amazing and I went from having joy to being afraid, Fear, born of the unknown.

Suddenly I saw myself from the outside just as I was sitting in a lotus position in the living room with my companions and all those present, I looked back at myself, was it me? I couldn't believe it! How was it possible, was I outside my body? How could I see my back? And fear arose in that fraction of a second, that sensation was terrible and I returned to my body feeling a force that praised me to the right side as if someone was pulling me.

A vortex of energy unfolded but I began to fight that force I did not want to drag me, take me, but I was too strong and could not with it, so I was dragging and my body stretched like a doll of plasticine, I stretched and saw how lights came out colorful people in front, my clothes and my body everything began to mix as everything was bent, stretched to the right, everything with me was unfolding.

Then when I could no longer fight against this force and everything was stretched like plasticine my head and my trunk was part of everything mixed, I was very scared and I thought with these words, so manifested my first thought: I tangled my mind, gave me a stroke! (stroke), I thought it was my end and as I could, I opened my eyes.

When I opened my eyes everyone had finished the meditation, they had turned on the lights and the teacher was talking and giving directions, some had already stopped from their place, while I was crooked, rigid as a trunk to the right, but not as much as I saw myself before opening my eyes, I was the only crooked tree of the place.

After straightening up, I hurriedly went to ask what had happened to me, what should I do? the teacher listened to me attentively and told me that I had exploited the pain, that all the energy I had blocked in my chest was already released and what I had experienced was called Samsara, I remember her exclamation "there he gave you a Samsara", that word was new to me, I had never heard it, days later they mention and explain its meaning, samsara is the cycle of birth, life, death and incarnation in Buddhism in the philosophical traditions of India; Hinduism, Buddhism, and also in others such as Gnosticism and other ancient philosophical religions of the world.

Saṃsāra derives from the Sanskrit saṃsārí, which means to flow together, to pass through different states, to wander. "Samsara" is the root of the Malay word "sengsara" which means suffering. Without suffering one cannot attain samsara.

In another order of ideas, when I ran to tell the teacher what had happened to me, she said that it was something normal and not to scare me.   What happened was not a trance at all, nor was it a loss of consciousness, quite the contrary, it was consciousness in its purest manifestation. I was terrified and with those reassuring words, I went to rest like everybody else.   But it was not possible for me, I felt from the head to the feet to go up and down gusts of energy, it was like being on the roller coaster but in bed, my stomach was going up and down, then after hours almost at dawn I was overcome by tiredness and I could sleep.

As I write this post recalling what happened I fall into consideration about the time I could have experienced this, for me were a few seconds, but after the meditation came an hour of recorded talks and then ended the day with the directions of the teacher and the questions and answers of the participants, when I left the trance was already speaking the teacher, that means that what seemed like a few seconds may have lasted more than an hour.

Well friends, this experience took me to make a book, where I tell in detail from the beginning to the end everything lived in that retreat, a book that is still in draft, has not been edited and much less published, if among you there is someone who has knowledge or contact with any publisher or businessman in this world, I would like to do that job.

In my next publication, I will report the place where I make this retreat, it is a worldwide G.R.O., surely there is one near you.   In conclusion, I can say that we came to this world to learn and above all to know each other if you are in search of God, the way is inward.   I ask you, have I been the only one to go through an experience of this kind, I don't think so. You can leave your comment if you have lived it tell me how you lived it.