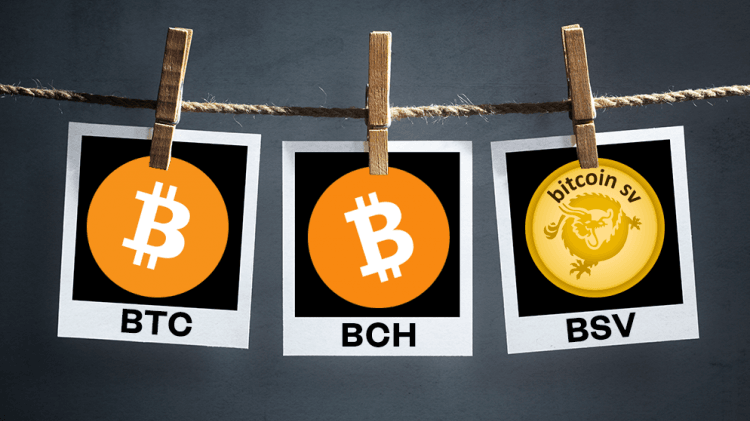 BitCoin as we know it today,  has fractured into 3 warring factions:  BTC, BCH, and BSV.  However, which one is the REAL bitcoin? It seems like the answer may not be as simple as most people first thought. Let's take a closer look and see if we can figure this out...

BTC - what everyone thinks is the real bitcoin:

Some exchanges also are calling BTC,  XBT   -  since BT is a currency code for a country,  they add X in front.

BTC is what most people consider to be the longest running version of BTC,  the original version.

However what most people don't know,  is that BTC is NOT the original Bitcoin,  it's actually a fork.

BTC has abandoned the original vision of Bitcoin for their path of Segregated Witness and side chains, so SegWitCoin BTC is a much better term for what it has become than Bitcoin.

The BTC die-hard miners and users always throw the word "CORE" around as if their version is the original or core code.

However,  when BTC completed the SegWit forks,  it stopped being the original Bitcoin.

Now most people argue that the changes were necessary to keep Bitcoin alive,  scale the network, etc, etc, etc

However, all the justification in the world does not change the fact that it's NOT the original Bitcoin.

Right now, derivative systems that have forked away from Bitcoin, such as BTC, are not peer-to-peer at all. Bitcoin was designed to allow peers to act without third parties.

This means the simplicity of payment verification is much more complicated,  the system is not able to scale as quickly,  block headers become limited, and as such requires every user or node to store a ton of information on the blockchain.

The miners or nodes in the network should act as a distributed intermediary, with no one intermediary directly trusted, which differs greatly from any of the current BTC, BCH and altcoin systems.

A distributed system enables a method that will stop such knaves seeking to alter the monetary supply yet not turn them into trusted third parties.

By requiring all systems run as a full network node, it's impossible to scale bitcoin.

This is what led to the BCH fork discussed next.

BCH - what everyone thinks is better than bitcoin:

AKA: Bitcoin Cash or BCH

Bitcoin Cash is another fork of BitCoin original source code.  It was forked from BTC, in 2017.  Designed to increase the header block size,  which apparently is now obviously a non-issue with BitCoin.

Folks were worried that header block size was too small, when in reality only miners would need to worry about the block size.

The average user who simply sends and receives transactions would not need to worry about header block size, because they only need to verify the most recent header block which is usually less than 50MB.

However only the biggest and fastest miners will actually worry about this, because they are the only ones fast enough to mine larger blocks.

Hence the split in the mining community, where the smaller miners DO want to limit block size, as they cant mine larger blocks as fast as the other miners.

This lead to the creation of bitcoin cash, and even more fragmentation in the miner/node market, with most miners or nodes now being forced to choose to either keep mining the SegWitCoreCoin chain or the new BitcoinCash chain.

AKA: Bitcoin Satoshi's Vision or BSV

BSV is currently the only form of bitcoin that uses the original protocols as they were intended to be used.

It seems in all the confusion of the first fork, and the second fork, everyone forgot that the original bitcoin protocol was still alive and running, albeit by a few die-hard purists, not to be confused with so-called maximalists (confused btc supporters).

Although much disinformation is found on the web trying to discredit BSV,  it appears to be the closest thing alive to the original Bitcoin whitepaper.

It's currently the only peer to peer implementation of SPV, simple payment verification,  which is the true blockchain payment mechanism the original bitcoin describes.

With all the confusion in the bitcoin marketplace, it's no wonder most people cannot seem to figure out which bitcoin is the real one.

The warring factions inside bitcoin have quietly been trying to discredit and disgrace their competitors, all claiming to be the real deal.

However it's pretty clear by tracking source code changes, reading the original whitepaper, etc. that none are the original.

The closest thing to the original bitcoin is BSV.

It's the only blockchain that is actually peer-to-peer, fully decentralized, and using the original simple payment verification system that makes bitcoin truly peer-to-peer.

Anything less is just a pale imitation.