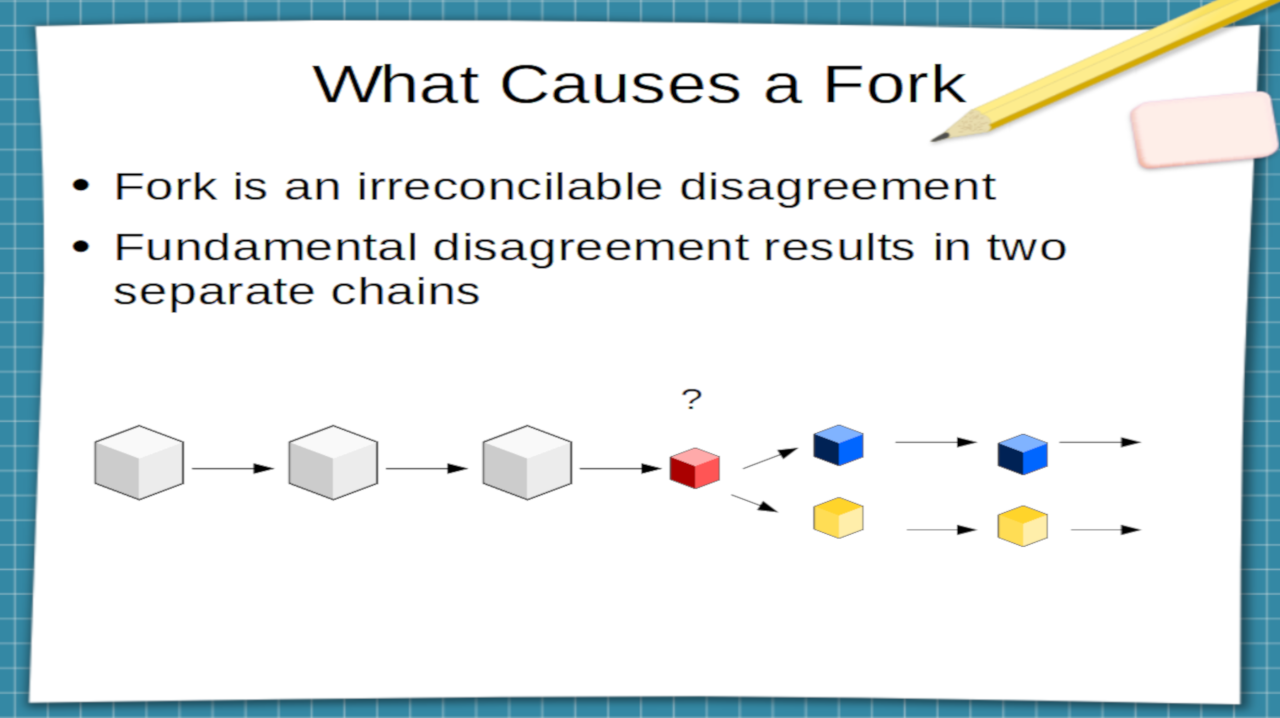 As we learned in the previous article, blockchains are constantly evolving, growing, and adding new transactions. Sometimes, as a blockchain grows and develops, it needs to perform an upgrade to better fulfill its function. Sometimes, this upgrade can be implemented with very little disturbance to the network, but other times, the proposed upgrades are so controversial that they cause the blockchain to split into two separate chains. In this article, we will learn the basics about cryptocurrency forks: what they are, why they happen, and the difference between a hard and a soft fork.

First off, it's important to understand that there are two different kinds of forks. It's a bit of an oversimplification, but a soft fork can be thought of as a simple backward-compatible software update. Soft forks usually don’t result in a major disturbance to the network. Bitcoin’s upgrade to the SegWit process can be thought of as a soft fork because it freed up space within each block (upgraded process) without resulting in a split of the blockchain. By contrast, the much more exciting hard fork, which results in a split of the blockchain, will be the focus of this article.

What a Fork Isn't

At its core, we could say that a fork results from a breakdown of consensus, or in other words, a fundamental, irreconcilable difference about the state of the blockchain. As we learned in the article about consensus, new blocks and transactions are incorporated into the blockchain through either PoW or PoS depending on the algorithm. From time to time, two miners might simultaneously be awarded the new block. At that instant in time, the network faces a decision. Of the two blocks that have been created, which will be chosen to carry forward the blockchain? 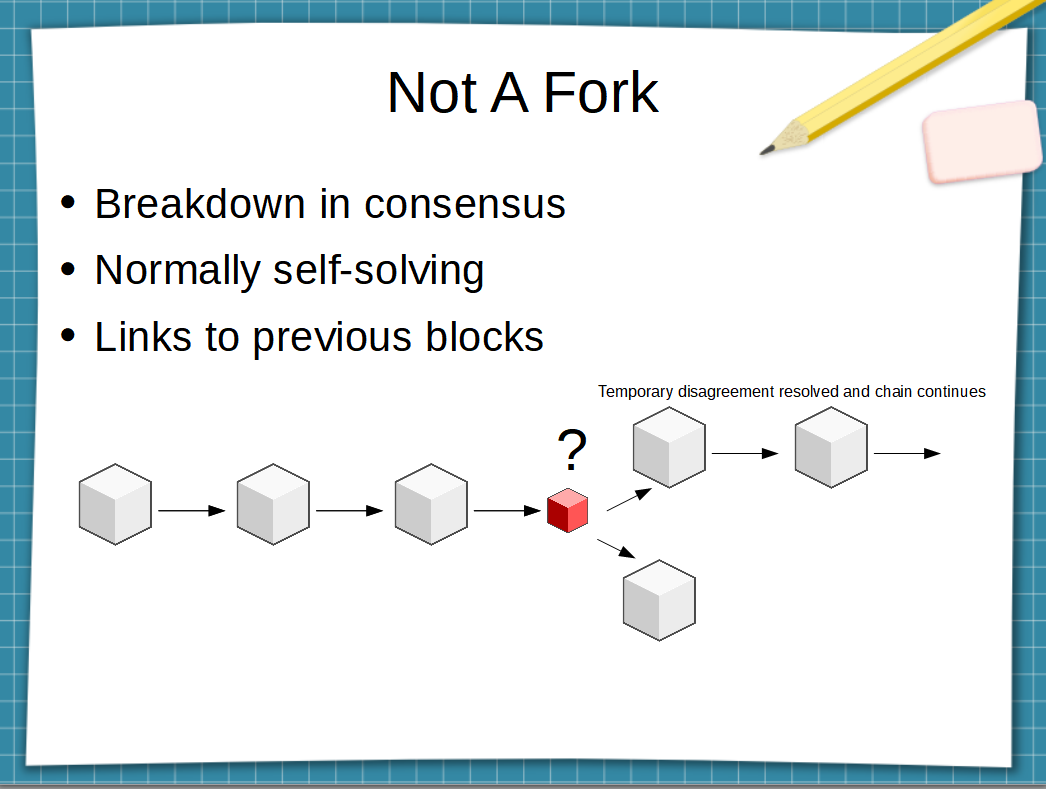 Under normal circumstances, this problem resolves itself as future blocks include a reference linking back to the previous block. As successive blocks are mined, they will be forced to choose which of the contested blocks they recognize as the previous block, thus resolving the issue. Such an example is a normal part of the network’s operations and is NOT a fork. However, it does serve as a good building block for explaining how a true fork actually works.

A true fork is more than a temporary disagreement about which block is valid. In the previous example, all the miners agreed about the state of the network, they were just in temporary confusion about which block was valid. By contrast a hard fork represents a deliberate disagreement about the network. For example, the Bitcoin Cash Cryptocurrency was created as a hard fork of the Bitcoin blockchain based on a disagreement over the total block size. Likewise, Ethereum and Ethereum Classic split after different groups could not agree on the way to handle a hack. 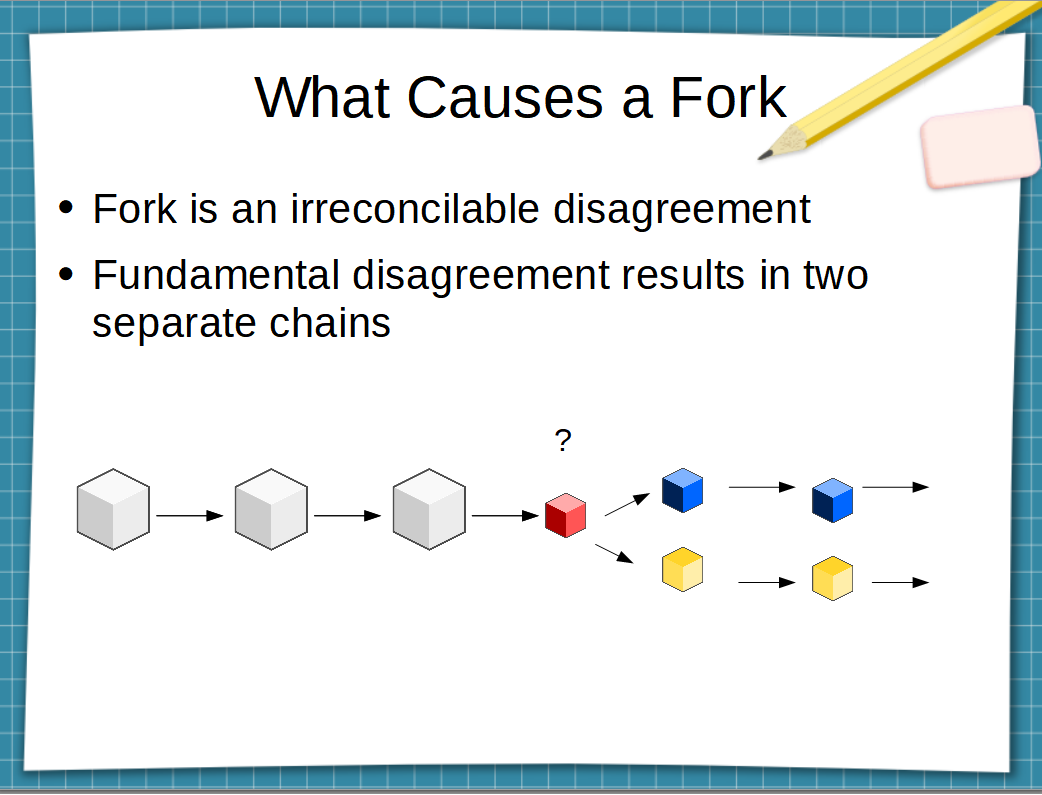 When a true hard fork occurs, the existing blockchain remains intact up to the point of the split, but after the split, two separate, independent blockchains are created. In a sense, we can think of forks something like a family tree. Just as each child in a family is their own unique person and will create their own family tree moving forward, they still have the exact same family history of their parents right up to the time are born. The same is true with forked cryptos. Even though Bitcoin Cash split from Bitcoin, it still shares the transaction and block history up to the point of the split. Likewise, Bitcoin Satoshi Vision split from Bitcoin Cash, which means that it not only is based on all of Bitcoin Cash’s transactions but the transactions of Bitcoin as well. As cryptos continue to fork and split, they “inherit” the history of their parent chains.

In summary, cryptocurrency forks can be either "soft" or "hard". Soft forks can be thought of as minor upgrades while hard forks lead to major changes in the blockchain.