As we predicted back in January, the (previous) bull market cycle would be over when helicopter money would stop flowing - and that would be around April to May of this year (see https://www.publish0x.com/the-other-side/its-time-for-you-to-ask-the-tough-questions-xdngynn in comments). As you can see in the BTC daily chart below, all MAs have turned to negative, and a downward channel is confirmed: 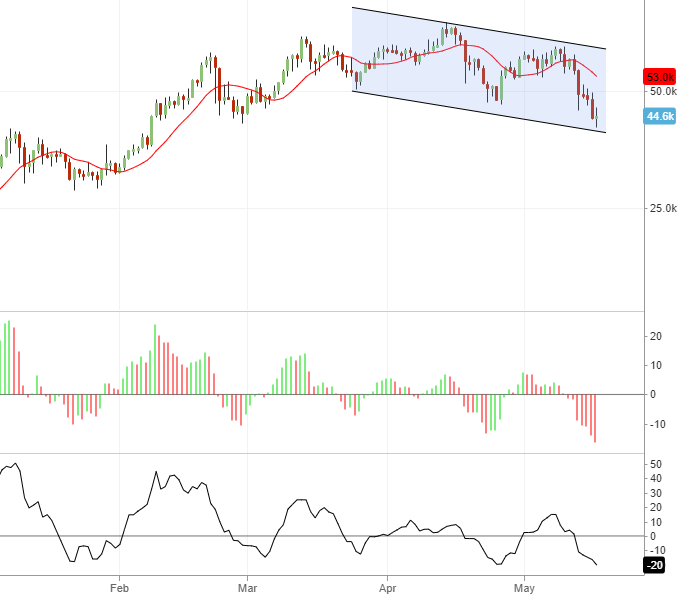 So what are the right questions do you need to ask now? Here is a non-exhaustive list:

Is this the end of Bitcoin?

Where does it stop?

It is profound that each crypto-asset has its own dynamics, and one size does not fit all. However, since BTC is the reference asset for the market, as it has the longest trading history, we will try to see patterns in that. Both in 2014 bear market and the 2018 bear market, BTC lost some 2/3 of its previous ATH (all-time-high) in value. Since in the previous bull run ATH was at $63,000, you may expect this bear cycle to end at around $20,000-21,000 (consistent with a long trading line support, prior to the last boom).

As with all bear cycles, this is not going to be a straight line. There is bumpy road ahead.

There is no short or definitive answer to this. It all depends on your trading style, your risk appetite, your financial situation, or the country you live in. Whatever you do though, do not open leveraged positions. Ever. Crypto markets are volatile enough on themselves, don't add needless volatility to your trades.

How do you know it's not just a temporary situation?

Actually, we don't. However, all MAs, and signals, point that we are entering a bear market cycle - and cycles are temporary by definition. For a market to go higher though, you need loads of liquidity to be added in it. And with helicopter money being cut-off, you will only be seeing price corrections within the downwards channel. Unless a similar situation where loads of fresh market participants with loads of liquidity join the market, the cycle won't be reversed.

How do you know it's not simply a price correction?

Supporting crypto and buying crypto are two entirely different things. Elon Musk is not buying crypto using his own money. He is using Tesla as his own experimental piggy bank. And that is the definition of OTM (Other People's Money). Until he puts his own money where his mouth is, his tweets should not be taken seriously.