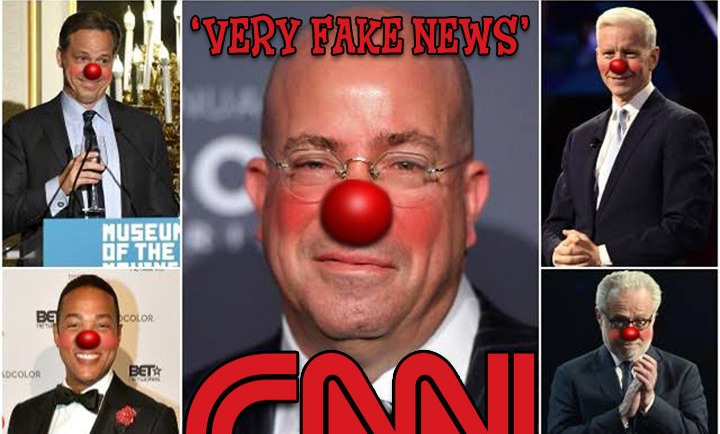 Why The main Stream media Can Not Be trusted Part II

Before we go into this, let me define what Journalism is suppose to be. Journalism is the investigations into facts and evidence no matter where they lead. You are to have those facts and the article a journalist writes is to be surrounded by those facts. For Example; Most uneducated fake news actually says the swamp is not being drained, on the contrary was not James Comey fired, Andrew Mccabe, Peter Struck, Lisa Page, and many others?

The Answer is yes. This is what journalism is to be following the actual facts and evidence which leads to an explosive story. This is not what is happening here.

Jeff Zucker has been the Lead Executive at CNN for the past 7 years. He has morning phone calls where he dictates the news, which is not news, to his employees. This means you are getting a fake lie, because of political bias. Jeff has been caught on hidden camera, which can not lie, having a phone call where he himself and his uneducated cronies are dictating what the story is to be. There are many other things happening in the world, yet he is going to outright lie to get his ideas out. No one cares about his ideas. The people only want facts. This should be known by now since CNN's ratings have hit an all time low. The entire network is viewed as the most ridiculous and biased outlet in the world. No one with any salt actually watches them. In fact thousands of people and I dare say millions have not even turned them on all of 2018-2019. This should tell you something, but of course, The Geek Jeff Zucker has no brain to even figure out the most simple basic business ethics. One of those ethics clearly state, the owner does not matter, the customer matters. The customers want facts, therefore this moron is to give them only facts, but he is unable to.

This is not the first time CNN has been exposed, but since to Project Veritas and an inside employee, the hidden camera gathered actual evidence of this biased fake scam. The hidden camera has revealed many insiders that work for the company exposing the political fairy tales that come out of that pathetic corporation. The sad part is, even when well known Liberal Ted Turner owned CNN it was never this bad.

Recently ABC network also got caught with a fake forgery story again. This network did a Photoshop to a training mission and doctored the video and reported that this was an attack in SYRIA. Unlike the days of old, the digital soldiers get to work and call them out on their lies. We Digital Soldiers are all over the world, and these stories that are designed to be propaganda to mislead the American people will never get by again.

In closing I would like to say this, there are still uneducated people out there that think the majority that is behind President Donald Trump are evil. This is 100% Wrong. It is the Minority that is evil. I can prove this with one question.

Are the Satanic individuals that kill children and do unthinkable acts of blood rituals the MAJORITY of the world, or are they the MINORITY of the World?