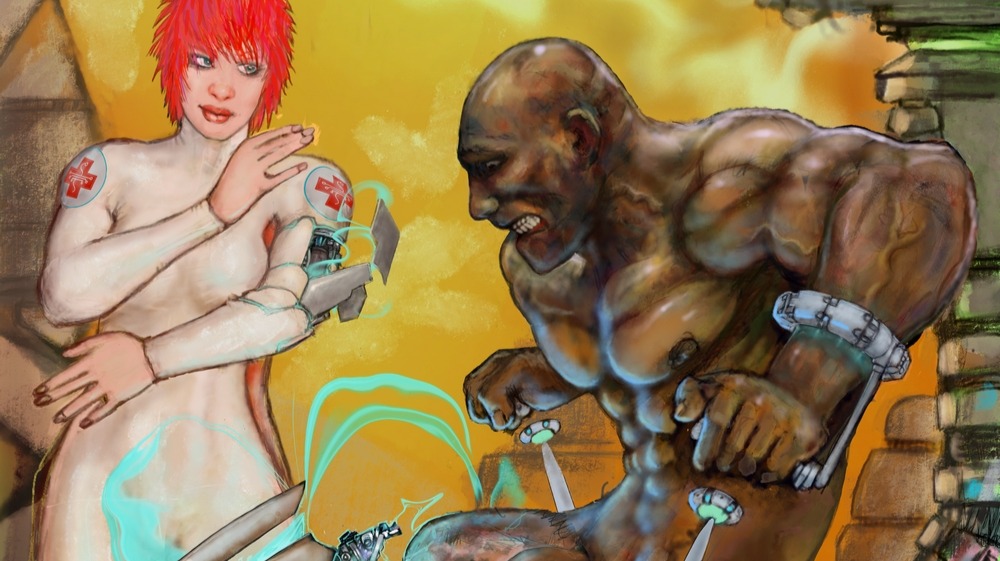 "Any sufficiently advanced technology is indistinguishable from magic." 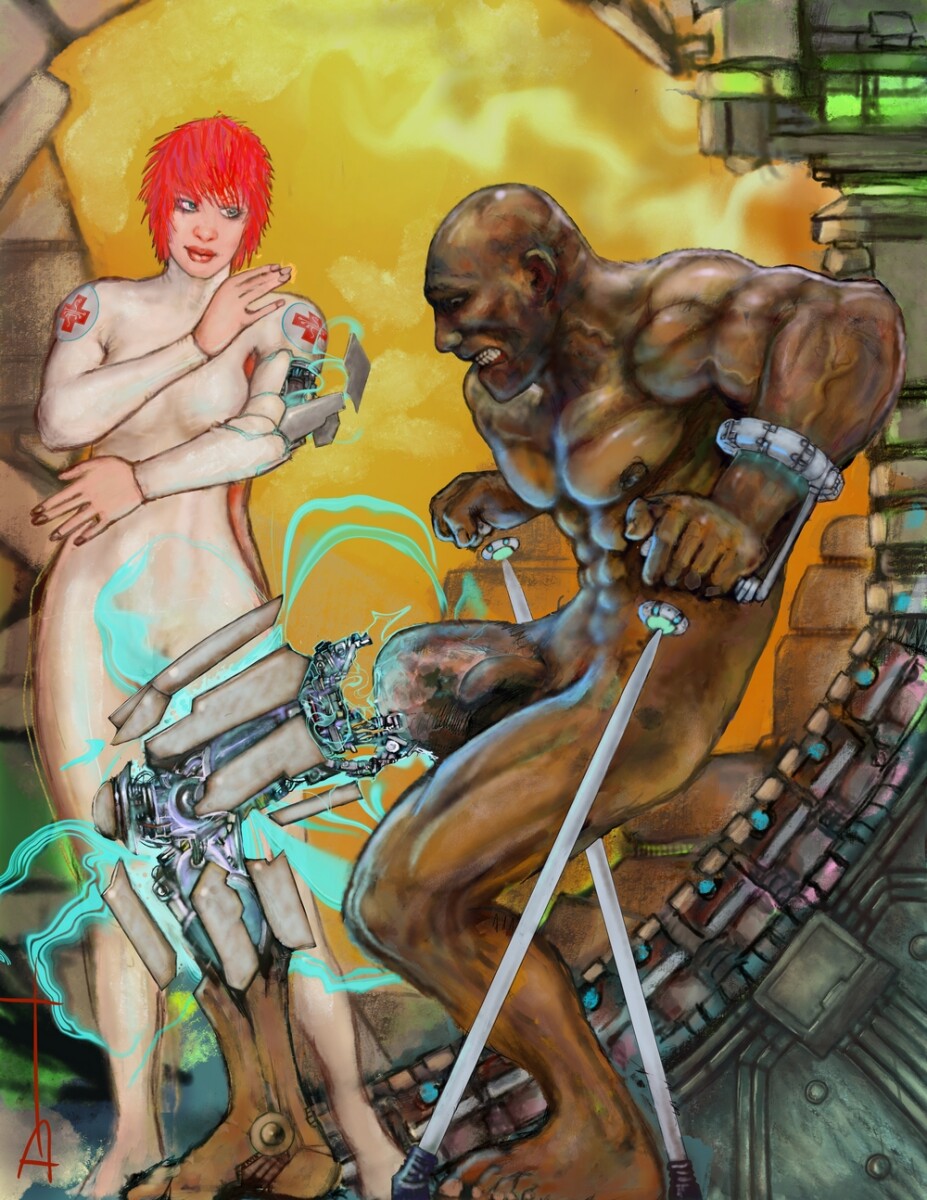 "Just lean forward, it'll take the weight," Mayotte said, supporting Denmark as he hobbled beside her, desperately clinging to her shoulder.

"It works exactly like your leg used to work. Just... don't think about it."

Denmark tried to follow her instructions but the experience was so alien that any attempt to rationalize what was happening met with stubborn defiance from his brain.

It had taken a lot of careful explanation by Mayotte to get him to agree to even try the cybernetic prosthetic. Unfortunately, he had no frame of reference to help him comprehend most of the concepts she was firing at him. As near as he could tell the contraption that she had plugged into the stump of his leg was somehow able to behave like a real leg.

He had staunchly refused to believe that such sorcery was possible, that was until Mayotte had nonchalantly removed her own arm and handed it to him. Fortunately, he had been seated at the time and was able to conceal his surprise and shock by very subtly not feinting.

"Truly, you possess some powerful magic," he said, barely managing to keep the quaver from of his voice.

"Here, let me help you," Mayotte said, helping him stand, "I know this is hard to understand, but it's really quite simple. This leg has been built to work in the same way your old one did."

She mimed a walking gesture with her middle and forefingers.

"Think about how you used to walk."

"I never used to think about it. I just did it," Denmark replied.

"Exactly. You rarely have to consciously think about walking. It's the same with this leg. If you try too hard the leg might overcompensate and that would be bad. It's many times stronger than your old leg, so you could end up hurting yourself."

Denmark absorbed this for a moment.

"Are you saying that this thing knows what I am thinking? Even if I'm not thinking it?"

Denmark stood still. He let Mayotte's hand hold him steady as it pressed against the small of his back. His torso and legs were bare so that the joint from his stump to the prosthetic was visible.

Her touch was light but he could feel the warmth of her hand radiating across his exposed skin. The sensation was not unpleasant.

"Ok, you win," she replied, smiling at the consternation furrowing his brow. "You're going to find this very difficult to understand, let alone believe, but I will try and explain."

"You have to promise to stop asking questions though," she admonished, as she landed a playful slap on his exposed buttock. "We need to get you up and about. You're starting to get flabby and I really don't like flab."

I think I may be going completely out of my mind, Denmark thought to himself, that, or I'm dreaming.

Mayotte grabbed him firmly by the shoulders and spun him around to face her.

"Think of your body as a vessel. A ship, if you will, for your mind." She tapped him on the forehead for emphasis.

He nodded, this he could understand.

She placed a hand gently on his breast, lightly tracing a circle around his heart.

"So, tell your heart to stop beating," she whispered, leaning in close.

Denmark was about to respond with a pithy remark, but he held his tongue at the last moment. His brain had managed to engage before his mouth and was wrestling with the unusually deep, philosophical nature of the instruction. He knew what a heart was and what it was for. He had stopped plenty of them in his time. He had even removed a few while the owner still screamed in agony. However, it had never occurred to him that he didn't control his own heart. He knew it was a muscle but then why could he not control it in the same way he controlled his legs or arms?

"Don't bother trying," Mayotte interjected into his reverie with a giggle. "The best you can do is slow it or speed it up a little, but without stabbing yourself in the chest, it's pretty much impossible to stop your own heart."

"So, what does that mean?" He asked, feeling more confused than ever.

"It means there is more to your mind than you know. It is communicating with your body in thousands of ways, every moment of your life and all completely without your knowledge. When you blink, when you breathe, even when you sneeze."

She looked down at his crotch then back up to his face. She held his gaze for a moment before grinning mischievously. Careful to maintain eye contact she slowly and gently grasped his penis. Denmark started in surprise but did not back away. He held his entire body tense for a moment as he processed what she was doing. After a moment, he relaxed and grinned mischievously back.

"I know it seems strange, but it is true," she said, releasing his penis. She raised her arms, before letting her hands drop slowly down his chest, following the contours of his muscles.

Denmark frowned, she was losing him but he liked where her hand was going.

"You saw the small coloured fibres that were sticking out of your leg when you woke up?" she asked tracing a line down his thigh to the joint with the prosthetic.

He did remember seeing them and realization began to slowly dawn on him. He was uncomfortably aware that something else was rising too.

"We put those there." She continued, "Each coloured fibre is connected directly to your own nerve fibre."

She leant forwards and gently kissed his forehead

"Now your mind can communicate directly through those fibres. I'm not going to bother explaining how the process works. Electricity is a discussion we can save for later. Just trust me on this."

She paused, gently cupping his balls.

"There may be many things on your mind, but ultimately, there is just one thing that drives a man," she squeezed and Denmark grunted in surprise.

With that she released her grip and took a few steps back from him, beckoning suggestively.

He walked after her without thinking.