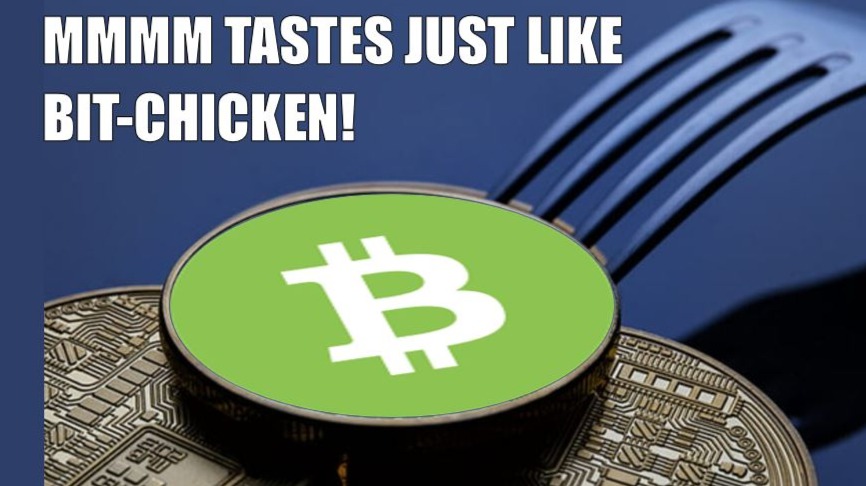 So a random stranger comes up to you on the street and mumbles a sincere question through their "Free Brittany" facemask:

"What is Bitcoin Cash?"

"I think that's like Bitcoin but it's green and leans in a different direction."

When you regain consciousness after the violent beating administered upon your bleeding body by the enraged stranger, who had the strength of a jacked up gorilla by the way, it occurs to you that you should be better prepared for this question in the future. That is what this article is here to help you do. Avoid pummelings from coked up street gorillas who really really want to know what the heck is up with Bitcoin Cash!

There are a few concepts we will need to cover to understand Bitcoin Cash. One of the first is "hard fork." No, this is not what happened to me when I failed to store my AMPL on chain and missed out on thousands of dollars when FORTH was airdropped. That is called being "hard AMPLForked" haha. Sad.

Hard forking (I'm sorry, that is really the term) is when a community of developers create one or more variants of a cryptocurrency while still using the same core blockchain code. Forks could conceivably vary just a little bit or a great deal. Sometimes hard forks express opportunities to pursue new applications with an existing code. Other times hard forks seem to express radically different visions of what the cryptocurrency is supposed to do in the first place.

The big problem Bitcoin (BTC) faced was that it only allowed blocks of roughly 1MB in its transactions. This seems small to my brain, honestly. Like, my old phone takes photos that are 4x the size. But, this adds up to a bottleneck in data processing speed because of two quirks of design. First, according to the original Bitcoin whitepaper (a stirring read, if not quite as exciting as The Economist magazine), nodes are programmed to process larger blockchains first. So there is a bit of a built in bias toward really long chains of transaction block. Some of these might be a decade old and have thousands of transactions recorded, with each block chained to the previous (chain of transactions blocks...block chains, mm-hmm). Second, BTC seems designed to be pretty slow. It processes a block every 10 minutes, so all of the transactions that were executed in those 10 minutes are sorted into a block, and not a very large block, and one of those gets verified ever 10 minutes. Verification means solving super hard algorithms and pretty much requires purchasing expensive, specialized computer processors and running them all the time. 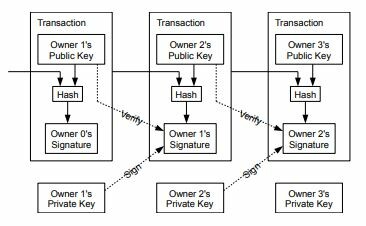 This is "Satoshi Nakamoto's" original idea for adding signatures to the blockchain, from the Whitepaper That Changed Everything.

One suggestion, favored by miners, to increase the speed of transactions, or at least lower the needed computing time, was to drop signatures from the transaction verification stage, then add them back onto the whole block later. This led to something I have only ever seen on Coinbase Wallet, which is SegWit - Segregated Witness as opposed to Legacy transaction verification for BitCoin. It is estimated that up to 65% of block data is from signatures, so SegWit should be easier to compute and therefore cheaper in miner's fees. Sadly, SegWit does not seem to have been adopted by any of Coinbase Wallet's friends, so Coinbase Wallet has to pay a lot of miner's fees by using the Legacy system.

The Vision of True Digital Currency

In 2017 BCH pushed to solve this transaction scalability problem by increasing the size of block to 8MB (and eventually to 32MB). The larger the block, the more intense the computing processing need, though, pushing it beyond the reach of hobby miners. However, the developers who forked so hard on this cryptocurrency also made it so that the difficulty of verifying a transaction could vary depending on how busy the network got. Thus, BCH was designed to be faster, even when there is a lot of use of the coin. That is because, BCH developers very strongly believe that BitCoin failed its original vision to become a digital currency and instead became a slow-to-transact store of value. BCH really could be used for one friend to pay for the next round at the pub, or for a sad, deluded Chelsea football fan to buy a shameful jersey at Oligarch Stadium (I kid because I care), or even for people to easily pay for fresh-picked dragonfruit at a farmside kiosk. Several other forks were created, but BCH has a market cap about 4 times the size of its nearest cousin, BSV (BitCoin Satoshi Vision...I want to make a joke about that name but I can't shake the image of 65,000 Paris Hilton anuses flying around the world every second).

To be useful, a digital currency has to be pretty cheap to use and as fast as possible. BCH is cheaper to use than BitCoin, that is for sure. The average BCH transaction fee is $0.035, which one would expect to pay on an average transaction value of $244,548.00. That is a large average transaction. I don't think the average consumer wants to use a digital currency for an average purchase equivalent to a - you guessed it - Lamborghini (spec'd out Huracan or Uris, you take your pick). A digital currency should feel efficient to use for dragonfruit, rounds of beer, or the desperate cry for help that is a Chelsea jersey (we are here for you Chelsea backers). The median transaction size on BCH is much more reasonable, about $37.81, with a median transaction fee of $0.003. Not bad.

Other marks of success for a digital currency is how often and how much it is used. According to my new favorite data diarrhea site, bitinfocharts.com, BCH has an impressive 24-hour volume of $26,427,289,514.00. This figure corresponds to 106.21% of BCH market cap. Yes! That is correct! BCH is used so frequently in transactions that the entire total market value of every last BCH-toshi is sent or spent every day with a little extra thrown in.

As warring cousins, everything that BCH does eventually gets compared to BitCoin, so we might as well get this over with.

24-hour Volume in Terms of Percentage of Market Cap:

Yeah, BitCoin is not changing hands much.

How Does Bitcoin Cash Hold Its Value?

Both BTC and BCH have built-in scarcity, which supports their value. In fact, there are supposed to only ever be a maximum of 21 million BTC, and the same exact number for BCH. For awhile, BTC and BCH could be mined using the same methods to solve the same difficulty algorithms. Miners would switch back and forth using the same equipment depending on which was more profitable. The problem for BCH was that that approach was not mining enough new cryptocurrency, so the changed their mining difficulty algorithm to be easier. Easier difficulty means more coins get mined. As I write this, there are 18,698,312 BTC mined and out in the world (or trapped forever on someone's burnt wallet) and 18,713,096 BCH mined and running loose, so that strategy worked.

One of the quirks of both cryptocurrencies has to do with this scarcity idea, and the notion that whales might hold onto an overwhelming amount of crypto, leaving the little shrimp powerless to fend for itself. With 97.74% of BitCoin's market cap just sitting on the sidelines each day, somebody is sitting on a lot of it! The top 100 richest BitCoin whales own 15% of all the BitCoin.

At the same time, "the people's digital money" BCH is pretty concentrated, too. The Top 10 wallets (just 10, not 10% or anything) control 13.69% of all the BCH in the world. That is nearly triple the percentage controlled by the Top 10 BitCoin Wallets. Regular old BitCoin seems to be a lot more widely distributed, including among ultra wealthy whale wallets, so perhaps BCH will become less concentrated over time like its cousin has.

Where to Get BCH

Hopefully you are prepared to avoid savage beatings the next time someone asks you about BCH. But just in case the coked-up great ape has a follow-up question, let's take a look at where you can get and trade BCH. After all, BCH has been on a great price run lately.

BCH is often to be found in the Top Ten cryptocurrencies by marketcap, so you really can get it almost anywhere. CoinGecko lists a kind of odd assortment of Binance, Huobi, XT, Upbit, and LBank, but I know that Coinbase, Gemini, eToro, KuCoin, and almost anything other than BlockFi works with BCH. There's even a Binance Secure Chain version of BCH that you can trade on in-wallet Dexes, such as MetaMask, Trust, or SafePal. Heck, you can even "buy" BCH on PayPal. Perhaps the most obvious place to deal with BCH is Bitcoin.com though. Bitcoin.com also is a good resource for BCH-SLP tokens. What are those?

BCH has an ecosystem of tokens built on the BCH chain, kind of how all those ERC and BEP tokens are built on Ethereum and Binance, respectively. These are Simple Ledger Protocol tokens, or BCH-SLP tokens.

I personally keep my BCH on Celsius, where it earns interest while I hodl. When it gets to a decent size it will be zoomed to my wallet for pretty cheap!

There are a few ways to get BCH for free, mainly through creating blog content for read.cash or by microblogging (the copyright-free way of saying Twittering) on noise.cash.

Now when Cokey the Ape confronts you, you can confidently answer BitCoin Cash is:

If you would like to nab some BCH before the Cocaine Gorillas do, you can hunt it down at any of the sites I listed above. If you would like to support my writing, then please use one of my referrals if they work for you. Both require some degree of KYC, so please be forewarned.

>>>Join Celsius Network using my referral code 160685ab0a when signing up and you will receive $40 when you purchase or deposit $400 through them https://celsiusnetwork.app.link/160685ab0a (Full KYC is required for US folks at least)

>>>Try your hand at KuCoin, which has a referral link, but I don't know what if gives either you or me LOL, so you could always try it and tell me? Much professional! My KuCoin referral code is rJE6ED9