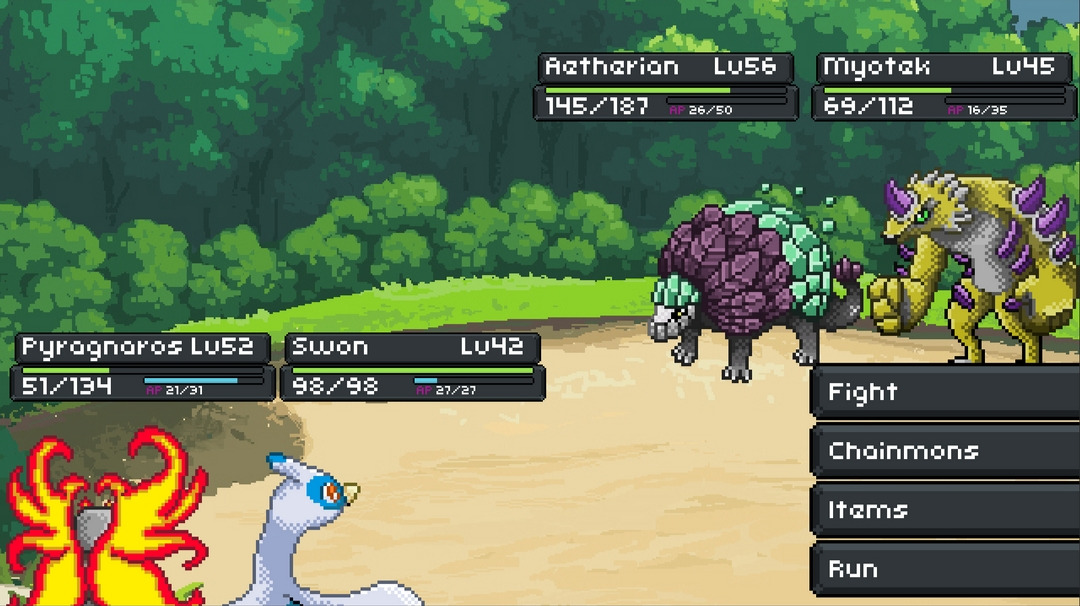 Over the past few weeks the projects I am involved in have seen incredible booms. The Crypto-Gaming Guild I lead is growing at what seems to be the right rate. We are being very intentional about the speed at which we grow but, at some point, I expect an uncontrollable boom. Crypto-Gaming is the future. Let me show you!

Splinterlands
This was my third season of Splinterlands and I consider it another great success. I was able to climb back up to Diamond 3 this season even while focused on other games. I played in 4-5 tournaments, but this time did not have any placements that pulled in major DEC. My winnings did pay for all my entry fees as they always do though. Tournaments in Splinterlands are still a great value if a bit 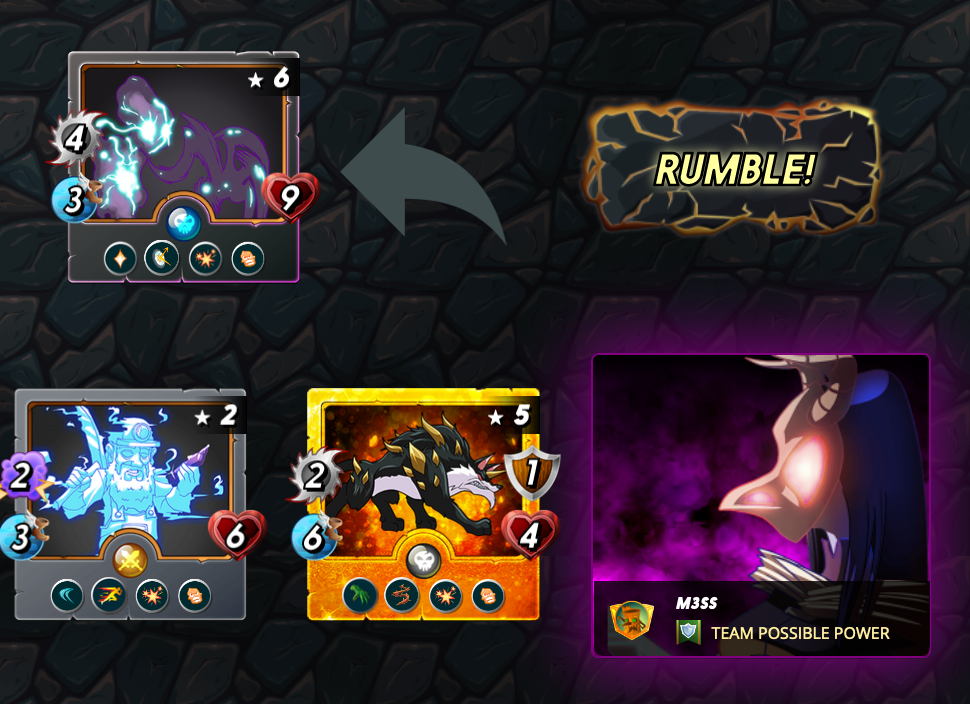 I’m settling into so extremely reliable line-ups spread across DEATH, EARTH, and DRAGON mostly. Daria into Vigilator + Manticore is so hard to fight through I’m starting to feel bad for my opponents. If I can I throw Scale Priest in to boost the team’s overall survivability. Haunted Spirit is still carrying DEATH, EARTHs healing can’t be ignored, and the few WATER staples I picked up are still doing work. It’s hard to ignore you can play WATER effectively with just Sea Monster, Spiked Turtle, Crustacean King, and some neutral staples. Maybe the cheapest Splinter when it comes to bang for the buck.

I have my eye on a very small list of cards totaling about $300 that I think should be my next purchase. The majority of these are Summoners around level 5 I feel are only going up as time goes on. So far I’ve been patient but we’ll see how long that lasts.

Yeah, kidding. Alien World had a huge moment over the past weeks as it and it’s token (TLM) were pulled into the Binance ecosystem. There is way too much to say here for me to cover it in a few sentences, but few things spike a coin more than an announcement of inclusion on major exchange. TLM climbed to $6+ before being nuked down to $.55 on the first day of sales. Since then it’s continued dropping but IMHO none of this matter at all. TLM is still finding it’s price and will be for months moving forward. Alien Worlds is not much more than a well-designed button and the attention and momentum it has created speak for themselves.

I did not sell any TLM. My full balance is staked to planet Naron earning me slightly higher payouts each time I mine.

About 6 weeks ago I bought about $40 in random Alien Worlds NFTs spread across tools, minions, weapons, and icons. That decisions has served me extremely well. I think my decision to not sell a single TLM for the coming year will serve me even better.

Without going into detail my mining set-up is focused on TLM mining power and I reinvested about $250 at what seemed like the right moment to secure some mining tools I believe will soon be out of my price range. It’s a hard pill to swallow buying your first of an item for <$5 and you second and third for $100+ but it’s the way it goes sometimes.

Oh, Lost Relics, you beautiful beast, I’ve been very excited to talk about this one! Last week all I could say was Lost Relics was awesome and also down for over a week.

Well, Lost Relics is back, the Easter event has been awesome, and Lost Relics has become the Crypto-Game that has me the most impressed. It’s like the very strange love-child of RuneScape and Diablo 1 hardcore and I’m just in love. I purchased a one month pendant with the goal of buying all additional pendants I need with in-game gold, which seemed like a major goal at the time. 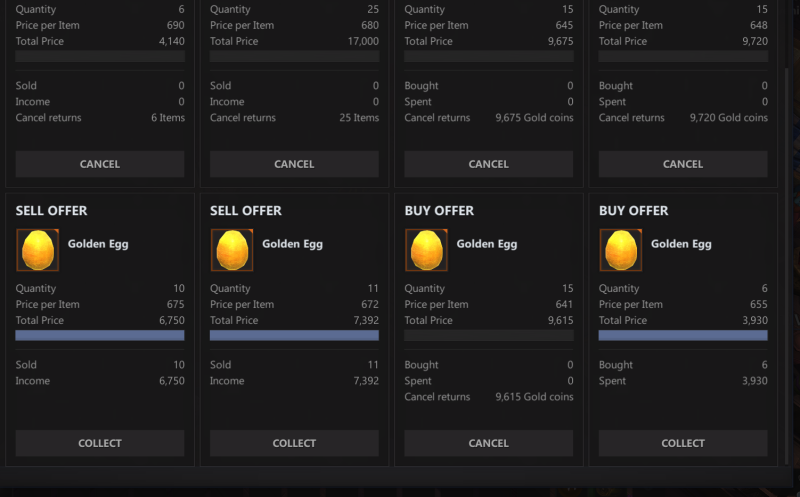 Through clever trades of hundreds of thousands of Easter eggs and at least tens of thousands of Golden Eggs I was able to secure some of the objects I most wanted to continue moving forward at max speed. My haul came out to a 3-Month Pendant, Demon Egg, Multigrain Bread, Mark of the Coven, a green Pickaxe for when I hit level 10, and an Aeropiercer! For an Easter event it’s sure feeling like Christmas in my Stash!

Upland
Upland has been opening up new districts and setting exploration quests in these new neighborhoods. I’m lazy though, so I stayed in my home neighborhood of Brooklyn (which was a ghost town) and found what seemed like a dozen random items. It was a lot like I Am Legend but with more passive income.

I’m still not feeling like I fully understand Upland, specifically the Block Explorer aspect of the game. That said I’m having a good time pulling in rent and look forward to having some time to look a little deeper under the hood post-move.  I picked up a few of the Hero Packs when they went on sale for like $14 earlier this week and am sitting on them while they climb. The future for Upland seems bright.

RollerCoin
RollerCoin keeps rolling. Over the past week they announced they had now given out 46 BTC over the life of the project. Wow! They also updated the UI to make the basic mechanics of the game easier to understand specifically related to how the computer you are using effects your energy banking. They also set all the miners to be purchasable with the in-game currency of RLT which should iron out a few more sticking points that are easy to trip over in the first few sessions. 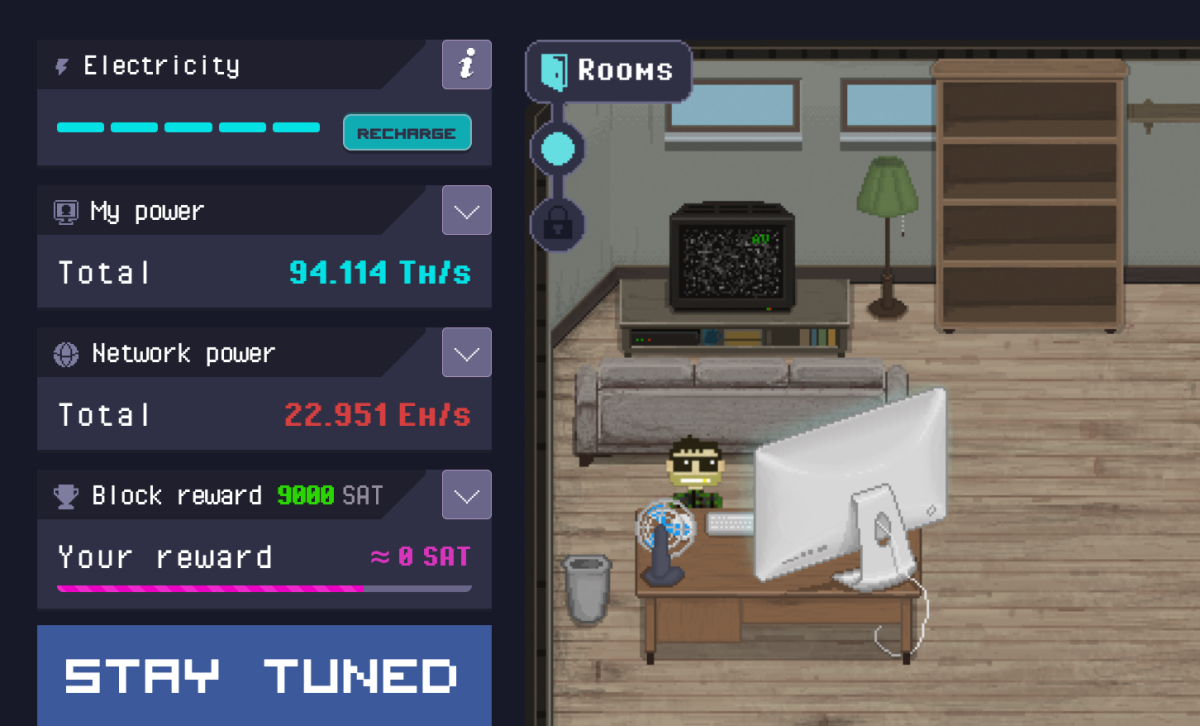 I’ve come into contact with some people who really hate this game and seem insulted by its existence. More than for other games it seems important for a vocal part of the community to be very loud about how the minigames are bad and the referral program makes it a scam of some sort.

I compare RollerCoin to FreeBitco.in in my head constantly. One passes out about 12 satoshi when you remember to press the button every hour and the other drops about half that every 5 minutes, collects it automatically, and has gamification mechanics. I love them both and use them to fund other games

Rising Star
Rising Star is again the little timer game that could with the announcement of STARPRO and a path to play the game as a music industry professional as opposed to a musician. Cool! Again Rising Star seems to be competing with no one but itself.

Rising Star will continue to be viewed as a silly little music game until it has its Alien Worlds moment and blows up into something huge. I’m glad to be here early on this one!

Neon District
The life of a pizza delivery ninja is like groundhogs day. I’m still stacking neon and upgrading my team but I’m getting a bit worried about Neon Districts future after looking up its daily player numbers. Neon District has a bright future if it has a future.

I’d be surprised to see this project die but without some updates of substance soon I’m worried it will simply be forgotten for other more complete games.

Freebitco.in
Ol’ reliable is still chugging. About 5 weeks ago I deposited 13,500 FUN here and have been making great interest and multiple daily Wheel Of Fortune spins. Its annoying that some of the scores like Reward Points or Lottery Tickets pay out as WoF rewards but atleast the RPs can be traded for satoshi on a 1/1 basic (when you have 100,000). I’ve been using this one for years and have built a lot of BTC wealth here. I’m not going anywhere.

Synergy of Sierra
Synergy of Sierra is a coming deck building game looking to incorporate NTFs and tokenomics. I absolutely love deckbuilding games and think the way they do not force players to build huge collections is a model ore cryptogames should explore. For all the TCGs we have you’d figure we would have more Deckbuilders by now! 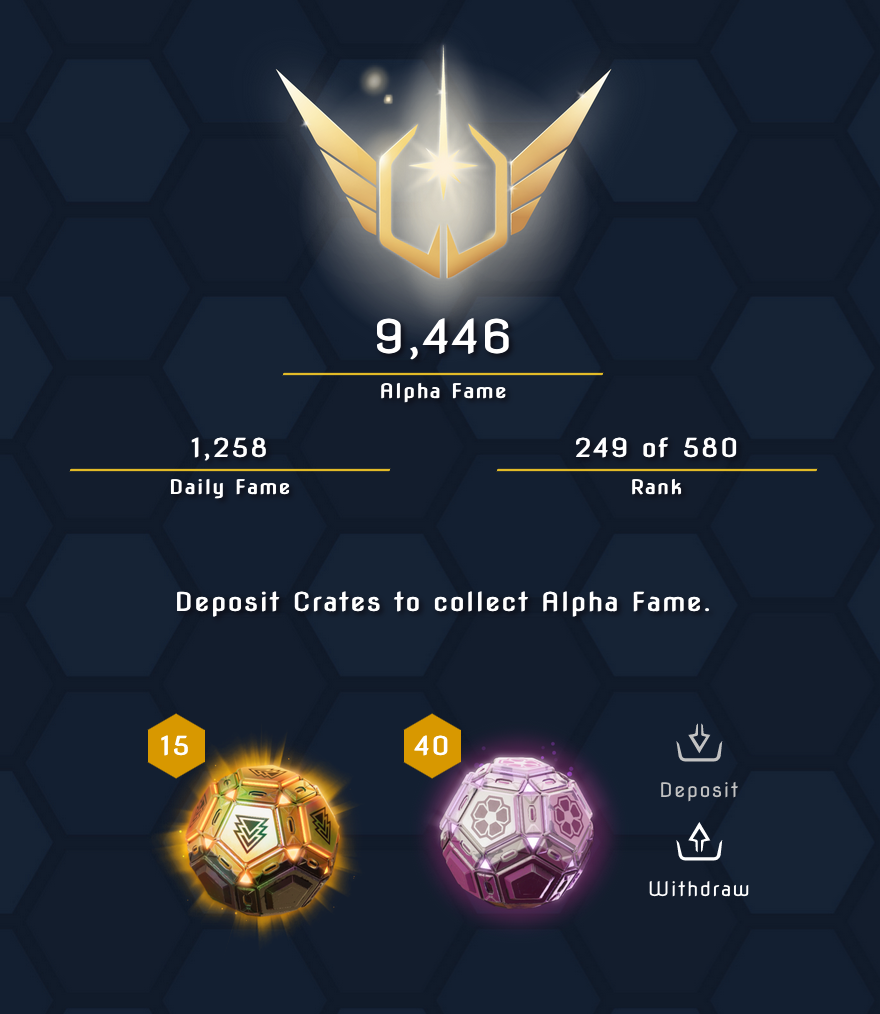 The game is currently pre-Alpha but you can buy two different kinds of collection crates and stake them for “Alpha Fame”. This Alpha Fame has been said to be connected to players getting unique cards, animations, frames, and other game assets in the future. I jumped on this one early and am slowly building up my Fame. I look forward to more news here but am in no major rush.

ChainMonsters
It’s that game with the pocket monsters but with NFT and blockchain assets and it just entered Alpha. I bought in here but, as of yet, have not had any time to see if the game is currently playable. Monster Battlers are a global phenomenon and the ceiling here is sky high. 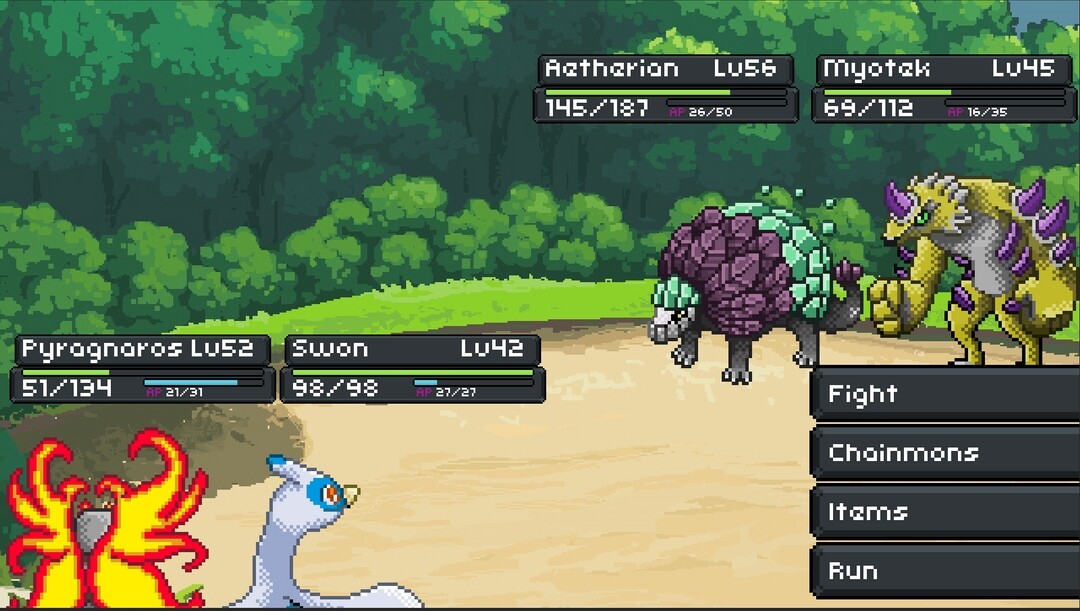 The team seems to be working hard to get the game pushed forward but, until I have seen more, I wont have more to say.

Dr. Who World Apart
I’ve spoken about Dr. Who Worlds Apart in every issue of The Drips thus far. It’s a massive project by the BBC to leverage the Dr. Who fandom into a crypto TCG using a very novel card quality system that boarders on absolute absurdity. For each card there are about 15 frames which is going to make determining value an absolute nightmare. 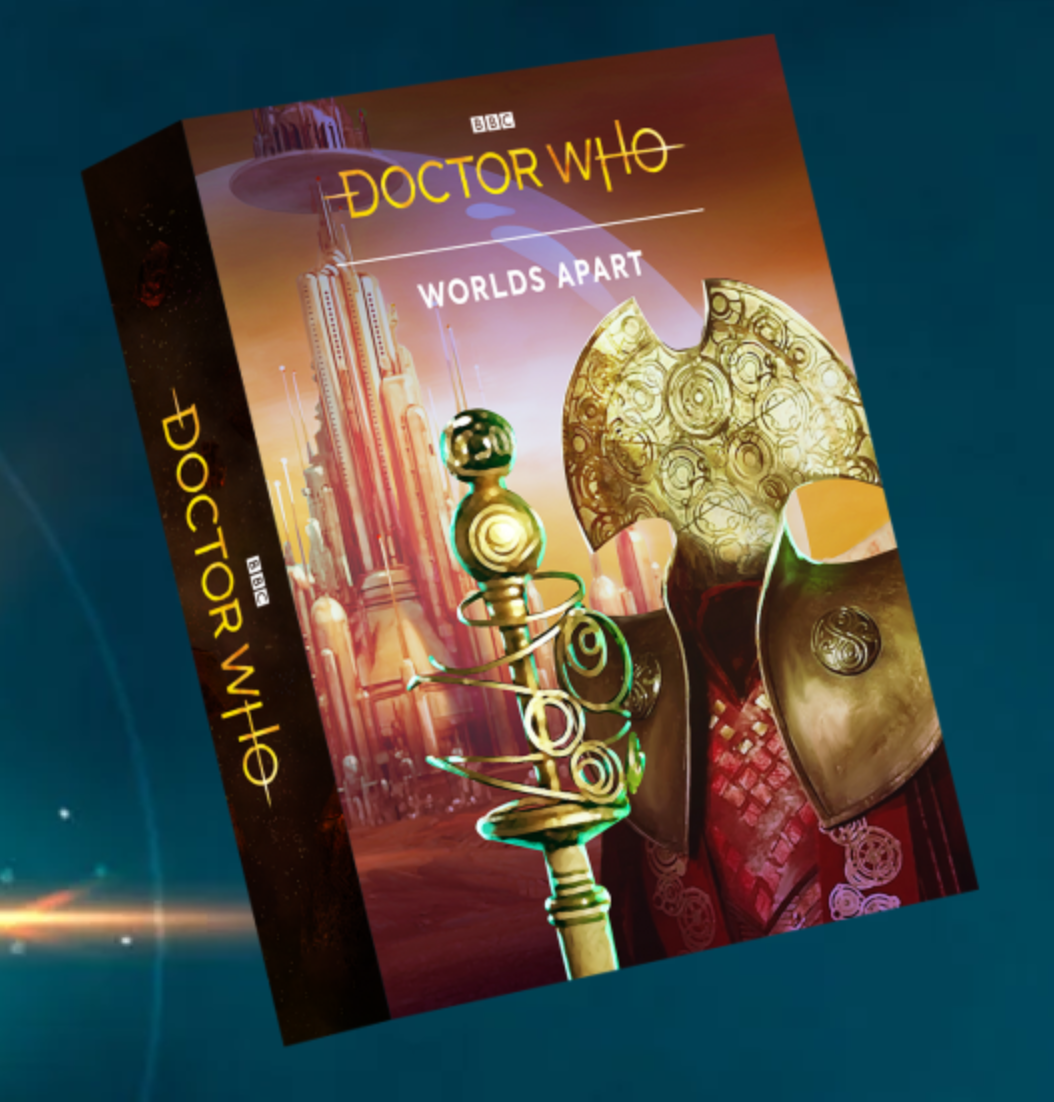 As someone who has been very interested in game design, I can’t wait to see how this moves forward and am logging in daily to collect my Pandaks.

I still want to be a space man. eXode still looks fantastic. There is still very little to do here. I don’t regret buying in ticket to this one and am just getting more and more excited about this beautiful game and it’s potential. I’d really love to have some conversations with the eXode team about what is in the works but, until then, will bide my time with other games.

That's it for this edition! Issue #4 might take not be here until the middle of May due to the move. Until then, happy gaming and never turn your back on a Furious Chicken!

Keep up with the latest news surrounding play to earn and other game-based coin / NFT collection methods. Learn about new options as soon as we know about them and which projects are only here to scam their users and farm clicks.