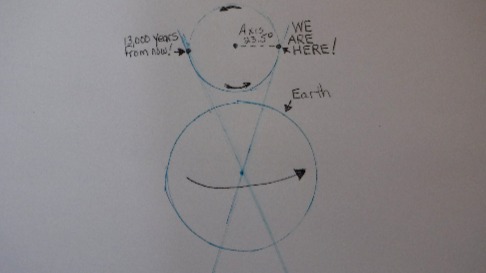 The Precession Of The Earth Is Eternal

In a previous article from a few months back titled, 'We should be exploding at the speed we're moving', I detailed how our planet Earth is spinning on a daily basis at an angle,  while orbiting / spiraling around the sun while our entire solar system, led by our sun orbits the Milky Way which in turn is part of an even bigger clock. We really are moving at astronomical speeds that it's mind boggling. Thank goodness for gravity, even though we're still not quite sure where gravity comes from.

Yet, there's another key part of this fascinating story that needs mentioning. It relates to the spring and fall equinoxes and the winter and summer solstices. It also relates to the changing of the seasons, from cold to warm climates. It affects our sleeping patterns and is the likely cause of ice ages. It's led to the rise and fall of civilizations and great droughts and great rains... all over a 26,000 year cycle.

It's called the 'Precession of The Earth'. Earth is tilted off its axis, that's no secret but it's also doing something else. Earth has a slight wobble. Like a spinning top, the wobble forms a circle. Earth's tilted axis follows around this circle to an angle of about 23.5 degrees and completes a full revolution of this circle every 26,000 years or so. The actual time line can never be exacted due to the nature of the mechanics of the solar system and the universe, etc..

I'm not a graphics artist nor would I swipe an image off the internet so I drew this image to explain visually what is happening here. It shows where we are approximately at the moment and how the Earth is tilted 'backward'. About 13,000 years from now, the Earth will be tilted 'forward' as it revolves and orbits around our Sun. 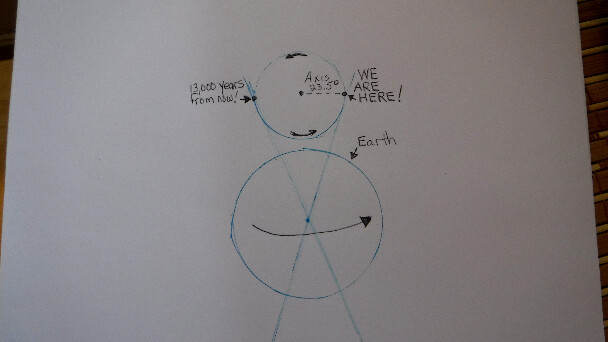 Here's another crude drawing that includes the sun to give a better idea mapping the Precession of The Earth and its position today. The Mayans were aware of the Earth's wobble, hence their famous calendar which ended or restarted in 2012, however you look at it. One complete 26,000 year cycle is known as a 'Great Year'. 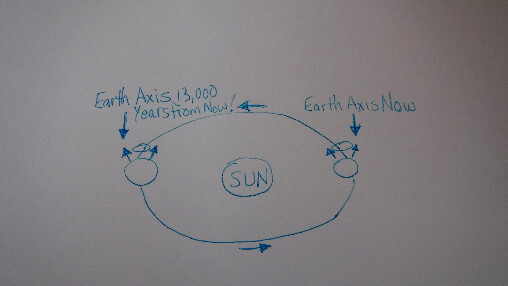 According to an article published by NASA, the precession  is cause by the equatorial bulge of the Earth as a result of the centrifugal force of the Earth's rotation. While gravity does hold us down, this natural bulge near the equator makes the Earth appear less spherical and more oval shaped. The bulge is almost entirely made up of our oceans.

About 13,000 years ago, in what is now Canada and the northern parts of the USA, thousands of feet of snow and ice covered the landscapes and sea levels were about 300 feet less than today's levels. It is believed people from Asia crossed over the frozen Bering Straights during that time to eventually colonize North America. Modern Native Americans are believed to be their descendants.

Around the world, the landscape was completely different. That's because the Earth's tilt was facing in the opposite direction of the sun compared to where it is today. Of course it would have a dramatic effect on the landscape, the weather, migration patterns and ocean currents which also have a huge impact on the weather. I suppose it might be safe to say it also plays a part in the cause of earthquakes and exploding volcanoes.

13,000 years ago, all the 'water' was concentrated as ice and snow in the Arctic and Antarctic. There are studies on the effects of rising and declining oceans on the speed and rotation of the Earth (see links in references below). The Equatorial Bulge appears to take deep breaths and then exhales as ice ages come and go and each single breath takes about 26,000 years. Certainly, this would have an overall effect on Earth's movements as it revolves around the Sun.

Compound the 'breathing bulge' with Earth's tilt as it revolves around the precession and we're playing a whole new ball game. Humanity should be paying closer attention so as to prepare for changes in our environment. It may one day mean mass relocation of entire populations. It could even help give the fabled story of Atlantis some serious credibility. There have been reports recently of snow in Saudi Arabia and severe frost in Brazil.

When we count all four seasons, we have what is called a 'Tropical Year' but there is another 'year' called the 'Sidereal Year'. The Tropical year refers to when we hit the winter solstice every year. Because of the precession of the Earth, the axis has moved 1/100th of a degree around the precession circle during this time. As a result, the Sidereal year is about 20 minutes shorter than the Tropical year.

At the same time, our Sun goes through its own 11 year (and 400 year) periods and there are even greater cycles of 100,000 and 400,000 years. All the while, the moon is playing its part in which it just so happens that it regulates the tilt angle of the Earth's rotation axis.

Because of the precession of the Earth, the view of our night sky changes over time. In year 1, we entered the constellation Pisces. Jesus really nailed it by being born on year one. After all, his sign is the fish or Pisces. It is now believed and with good reason, that we've already entered the constellation of Aquarius, just in the last  year or so. Such exciting times, even in these uncertain times.

The Age of Aquarius is also the 'age of knowledge'. We are on the cusp of something incredible that I believe will change the world for the better. As we hurtle through space and enter unknown regions, the frequencies we are exposed to are also changing, adding to the myriad of 'things' we are exposed to. I hope it helps to elevate humanity to a more peaceful, balanced plane of existence in the new epoch in front of us.

You'll weigh about 1% more at the equatorial 'bulge'.

Earth's orbit around the Sun is slightly elliptical, again, because of that 'bulge'.

Hipparchus of Nicea (167-162 B.C.) is credited with (re-discovering) the precession of the Earth.

Have we already reached peak gold?

The enigmatic mystery of the Great Pyramid of Giza.

Evidence of a magnetic polar shift in progress.

Put your PublishOx ambassador link to good use.

I demand to be vagile!

Earn Bitcoin while surfing with CryptoBrowser!