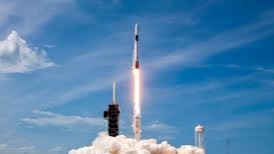 First things first SpaceX today successfully put the Crew-2 capsule into orbit and it should dock with the ISS without any delay. It was an early early launch at 5:49 AM EST today so I doubt many people where able to catch the live stream. The reason for this launch time though was because of the ISS's location if it had not taken off in the narrow time frame given it would have had to wait till Monday to try again.

With this successful launch SpaceX has put 10 astronauts in orbit and to the ISS in less than a year! It has also tied the Mercuery program for the number or astronauts according to one of my coworkers who is just as fasinated about space as I am! Now that this launch is done and one of the books SpaceX will be able to turn their attention to Starship until the Crew-1 capsule returns to Earth next week!

One of the biggest takeaways I have seen from this Starship is that it has even more heat tiles added to it then any other Starship has had before. I wonder if this is due to the leak issues they have had or if it is the next faze of testing. They have also made additional tweeks to certain parts of teh ship but honestly with the images I have seen it is still following the same mold. They still need to do a static engine fire test, as they do these before they launch just to make sure the engines all work correctly! Once done though the Boca Chica community seems to think the launch will follow as soon as possible after the static fire. The people done in South Texas think SpaceX will try to pull this off before Crew-1 returns.

It will be important for this Starship to return in one piece and not blow up. Not because there is anything bad with the way that SpaceX is testing it is just if the same craft keeps blowing up returning it be stuck on the minds of people. Imagine being a paying customer or NASA scientist getting into the vehicle that has blown up over and over and over upon reentery. I personally would be terrified to do so! Also NASA wants to return to the moon in 2024 and NASA deadlines for certifications could become a factor. NASA could also end up reconsidering using SpaceX is it fails to deliver.

Hopefully tomorrow some big news comes out.... it seems to be a SpaceX thing for big news on the weekends or really odd times like late at night/early in the morning. They keep getting closer and closer to landing this thing and it not exploding later on!