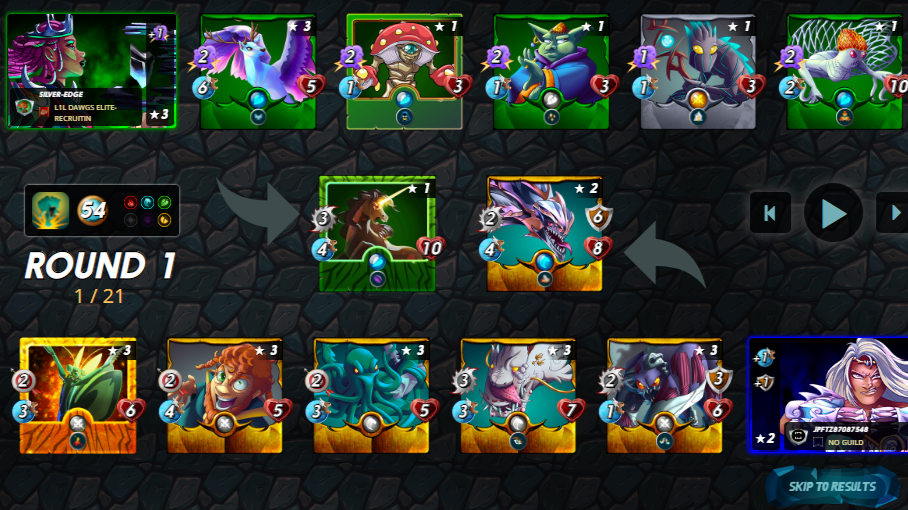 A combo I've found myself using often is Taunt and Triage.  One such combo uses: 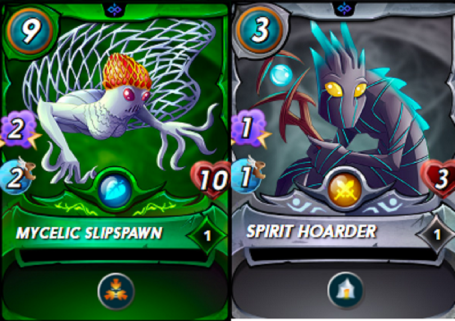 What am I trying to achieve - In short when I use this combo I am trying to split damage from the front to a backline card by using taunt and then using the triage skill to heal the taunt card.

When it works it can significantly improve the survivability of a team.

Lets look at an example of this in practice:

- Mana cap of 54 - A pretty generous cap allowing for most cards to be played;

- Stampede - allowing trample to activate multiple times in an attack;

Given the example cards above it's clear I decided to go with the Earth Splinter to use the Mycellic Slipspawn / Spirit Hoarder combination with Obsidian for that sweet sweet magic damage! 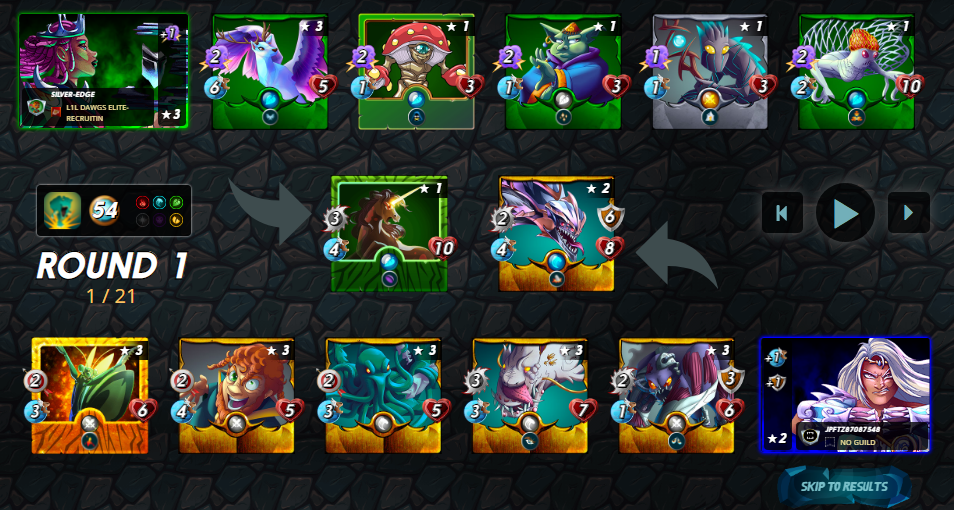 And so I went with:

Summoner - Obsidian (4) - For the magic damage buff of course!

Unicorn Mustang (8) - a solid tank but mostly for the void ability to mitigate magic damage;

Regal Peryton (5) - flying, ok life and as I have a levelled up Obsidian and Peryton a solid two base magic damage as well;

Goblin Psychic (6) - another solid two base magic attack and a tank heal to keep that Unicorn Mustang alive;

Mycellic Slipspawn (9) - for the taunt of course but also has a solid two base magic attack as well.

As you can see I've gone for an almost total magic attack so could be hurt by a Bortus team. I have magic mitigation in case my enemy uses a similar strategy and I've got survivability with the heals.

MY opponent went with Water and an all Gold Foil Deck!  But will the gold foils make a difference?

Diemonshark (8) - A strong tank and trample - in this ruleset, with the right team and right opponent can be very powerful;

Disintegrator (7) - a decent second tank but mostly for the demoralise ability to reduce enemy melee damage;

Mantoid (6) - for the fast two ranged attack with snipe ability.

Personally I wouldn't run a team like this as there doesnt feel like enough damage dealing ability using ranged and Kelya - if these cards were all under Life and General Sloan was available, that would be another story.

Turn One - Even with the speed buff Regal Peryton was faster and got the first shot off on the Diemon Shark.  Apart from a quick attack by the Unicorn Mustang (which missed) all of his team goes next due to speed and take the Mycellic Slipspawn down to one life.  The magic crew on my team goes last and with all that magic attack and no mitigation the team kills both the Diemonshark and the Disintigrator.  In addition the Unicorn Mustang is healed back to full life and the Mycellic Slipspawn to four life.  By splitting the damage up the Unicorn Mustang has survived and due to taunt my team is intact.

Turn two - Starts like this, his team is going to go down fast. Peryton goes first againbefore his team splits it's damage killing the Slipspawn  and damaging the Unicorn mustang.  The Slipspawn has done a good job soaking up almost two turns of damage.  The magic attackers go next taking out the DiemonShark and damaging the Kulu Swimhunter who will be useless in slot one in Turn three which will start as follows:

Turns three and four - are a formality with the Peryton killing the Swimhunter putting the Supply Runner in front with only five life.  The supply runner quickly dies although the Peryton takes a hit from the Mantoid before the Mantoid moves to slot one that damage is fixed by the Spirit Hoarder.  Turn four starts and with only the Mantoid in front his team is finished.

So a poor team to face my Earth Magic team which was able to easily survive due to the splitting of damage between the Slipspawn and the Unicorn Mustang.

Hope you find this combination useful (as Spirit Hoarder is neutral it can be used in other splinters too, such as life and shieldbearer or water and wavebrood).

If you are  are not into Splinterlands yet give it a go: