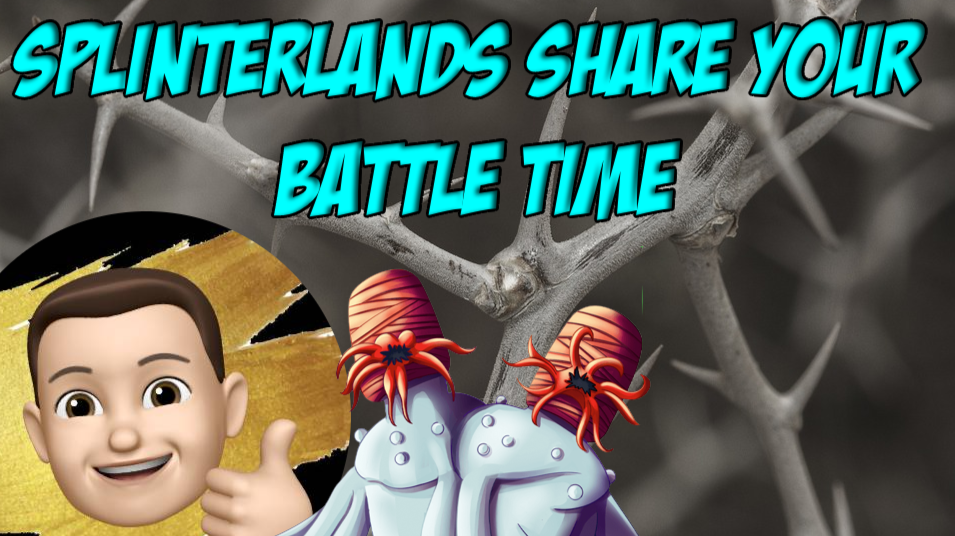 The new cost cards are for sure overlooked. When you can drop a card on the board that is cheap and helpful it is great. This week they asked us to take a look at Make sure you check out the Mycelic Morphoid and it is one of my favorite of the group. Challenge here if you want to take part in this. Given it is the last day and I just hope I did this time. Been a busy week but let us break down this little card. Thorns are key to this card being very helpful. I have him at level 3 because that is a good place to get him unless you are brand new. He has 2 major use cases either a 1st position card to take a hit and deal back some damage or a last position one to hurt those sneak monsters. Now it might look like a card that will only take one hit and deal back 2 damage. But the earth team has a lot of tricks. He combos with Queen Mycelia which provides not only armor but also amplify. Now he takes 2 hits and deals 6 if things work out well. The queen can also take away armor and heal him up if he is in anti sneak spot. I like him there more because the major weakness of this card is mages. Now when you look at him for the max level team he gets 3 HP that is a big upgrade because life can hive him 1 more easily and 2 more often. Now you have a 1 cost card with armor 5 hp and thorns that deal 3 damage ouch. Anyone that isn't making sure this guy can be added to your team is just leaving out some funny moments where he kills off a monster. Time to see how I used him.

Okay so while I didn't face someone with leveled cards I did get to play him where he did do something a little helpful. But also showed a little weakness. My account doesn't have the cards to give him a lot of buffs so in this game I just went for a blocker upfront. My Grund is a little slow so the gamble was he would be moved upfront and still get his double attack while the thorns might weaken his target. I put the Mycelic Slipspwan in the back to avoid a fast mage or archer killing my Morphoid without a chance to do back some damage. Other than that I filled my team with good high-cost mages as this was a 56 mana battle. Most of the time you might not want to use a 1 cost card here but I did it. I ran into a Kelya team a weakness for sure as all that armor was going to make my thorns work not as well. Still, my magic team was going to counter that well. Could I pull this off? You can watch the full replay here

The first round was going to be important. Could I deal enough damage before I started to lose my magies. As you can see after the buffs are in place my team looks a little slow. That Trample is going to be a bummer also. The round will start with the Demonshark killing off my Morphoid and he will deal some thorns damage back but it lands on armor. THen a trample will cause a hit on my Grund also. The only good thing is it will only be for 2. This is where an HP buff might have been big. After that Grund will take another hit for 2 and then mages and ranged fighters will go. My slipspawn is going to take 7 damage but that works well as it prevents those snipers from killing my goblin mage. All my mages will get to attack along with Grund so the Demonshard is going to die and I should hurt the flying squid. Okay this round is where things start to change a little. But lucky for me I won't lose 2 mages before they attack. Sure the speed on his side means Grund will get hit down to 4 to start the round and then the Snipers will kill off my Slipspawan before it attacks bummer and then the Deeplurker should hit gurnd putting him at one. That allows him to attack and with no misses I should be able to kill off that Flying squid and maybe weaken that disintegrator enough to hold onto this match.

Do you see it? It might look like I am at a disadvantage but everything is going to work out perfect. See my Prismatic Energy will hit first kill the front tank then the archers will go but that 4 damage won't kill the Magi of Chaos he will be left at 1 and the Deep lurker will also fall one damage short of a kill on the goblin healer and that will allow the two 3 damage mages to kill him off. Droping a archer into the front row where it can't attack. Funnow how a board can look bad for you before you dig deep into what will happen.

At this point the fight is over. Sure he will get to kill Goblin when he attacks but my two other mages will kill off the front row archer and drop the other down to get killed the next round. Just a case of mages a the end beating archers.

This is just a mop up round for my team and I am able to score a wine. My set worked out just like I wanted to expect for the Morphoid just getting run over. But I still wanted to show that. Maybe this didn't show off the power of this little card that great. But I just don't have the combo cards on my team yet for it. Still, I can see how good this 1 cost card can be. I hope you enjoyed the post if you checked it out. Make sure you sign up to player Splinterlands and earn money while you do it.