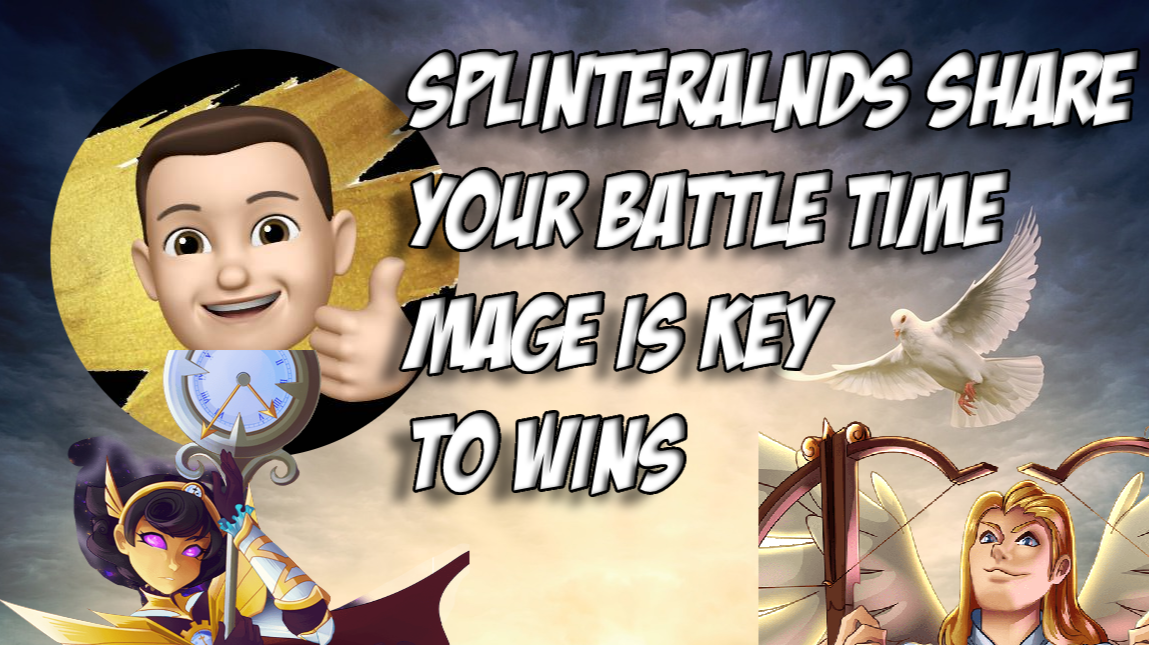 Splinterlands Likes Us To Share Battles This Is How I Won This time they picked on the cards that are very important for a team. Time mage has slow on that team that is a little slow. The team also has some powerful archers that are slow. By leveling the speed a bit it helps a lot. Glad to see this card in the Challenge make sure you check it out. If you are not using this card you should be for sure.

The time mage is a very solid card. At 4 mana it can fight into a lot of different mana caps. Yet it works better in ones over 20 IMO because it needs to combo with the PELACOR ARBALEST who has a powerful double strike with Sloan but can miss a lot if you don't slow down that other team. On top of that, the Time Mage is fast so it gets off an early magic attack. In a lot of modes that can matter as it might just get an early-round kill. If the card has a weakness it is that low HP. With magic reflect being popular that can be a problem. The life team can run triage to help with that issue though. As you level the card up the manage damage gets stronger and that won't always save you from a big bounce back. That is when high speed can be a problem. Just something to remember. Once it picks up rust it helps the archers even more. It also is a good counter to some of the melee cards that have armor. This card is one of the reasons Sloan is my first level 3 summoner. I hope to get it to level 3 soon. I will lose a speed to get that extra damage. Let us get to the battle. You can watch the full replay here

Okay, so we have 25 mana the range I like blast and archers can attack from the front. I went with the lineup I like but maybe made one mistake. I don't think the time mage should have been second because it set me up for a fast death. I went with my Pelacor Conjurer in front I was hoping the flying and 4 speed might get a miss and that would be big in the blast. Time mage slow down to help with the miss then I went with a healer and random archer and the double attacking powerhouse to finish it up. I need up going up vs a team that was close to mine but not leveled up. These are the accounts that might go away after the update if they didn't buy those cards. Still, it was a lineup that had a shot. They had slow to counter mine but didn't go for a fast tank. Instead, they went for a double tank extra armor and then a good double attacker and a random opportunity guy to round up the lineup. WHoe do you think will win?

This round was going to be the most important. In blast that is always true. Who would miss an attack? Who would attack first? Where would my Portal Spiner strike? Well, my cards are higher level so I would get to strike first. After both times mages went my healer went and cleared off the armor from the first tank then my ARBALEST attacked killing it and hitting the next tank removing the armor from their time mage. Then my portal spinner hit a big strike. With his one speed, the attacked the dimer mage and was able to finish it off. With that speed boost to my team, I thought I was going to win easily. But the RNG wasn't with me as the 1-speed guys on the other side hit my flying tank with one issue and my mage also died in the fight.

Round 2 starts and good thing this is close range but that is why I went with so many archers. Speed and levels are on my side again and that should help me win the battle if I don't miss. My first 3 attacks land perfect and with the right attack, my portal spinner could have won the match. He lined up that shot on the Harpy and missed. This allowed him to counterattack and we went on to round 3.

Okay this should just end right. My achers will attack first due to level so all I have to do is not miss. But RNG has not been on my side yet so I am a little worried. But it was for no reason as my ARBALEST landed both attacks and the match was over. It was a solid win. I could have used the time mage a bit better if I put the card in the 3rd spot lesson learned. I was hoping the RNG part of the game might have shown off how it would make them miss but it didn't happen. Yet I proved that if you invest in the cards you can beat an unlucky RNG match. This is the right time to start buying those cards as soon the prices might just head up. Make sure you sign up to player Splinterlands and earn money while you do it.