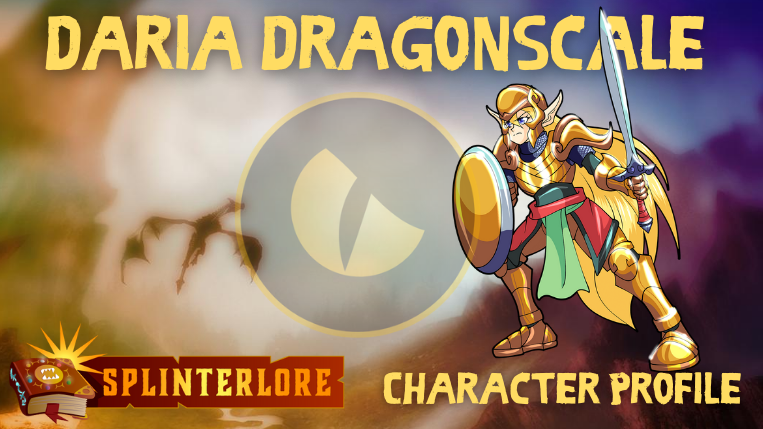 Beautiful, but always wears a frown,
Wrapped in golden armor, helm and shield,
Wouldn't be caught dead inside a gown,
Beneath the golden hair is rage concealed. Size - At 6 feet 5 inches, Daria towers above nearly all other Gloridax women, and if that weren’t enough, her raised armored boots give her another 3 or 4 inches. She has always used her size to intimidate her peers, ever since she was a little girl in Gloridax primary school. While she was a bully at an early age, Daria was never very good at fighting. She made up for this by being large, threatening and loud, hoping those she oppressed would never fight back.

Lifespan - Daria was eggborn to the Krysos clan, a family of unscaled Dragons known throughout history as brutal, deceptive and treacherous. Krysos Dragons have not had the full, scaled and winged appearance of a Dragon in over a thousand years, and the mark of their clan is long, pointed ears. Daria’s great great grandfather took the name of Dragonscale in an effort to rid the family of the Krysos name. Daria is 24 years old, and unless she talks herself into a deadly fight that she cannot win, she will die as an old woman at around 80.

Habitat - The Fortress of the Dragonsguard is one of the most heavily fortified buildings in the entire Splinterlands, second perhaps to the Keep of Neoxian, which is so secret its location is unknown. There are six lavish apartments permanently installed inside the Keep, one for each of the six Captains of the Dragonsguard. Daria moved in less than one year ago, when she became the youngest female Captain in the history of the Guard.

Weapon - Daria Dragonscale’s sword is called Feather, and it is the lightest sword in the Splinterlands. The blade can cleave through enemies like any heavier sword, but is roughly the weight of a chicken’s egg. Daria found it six years ago on a battle raid in the Smoldering Forest to sack a village of rebels against the Gloridax. A small child attacked her with the sword with surprising dexterity. After removing the sword from the child, Daria immediately realized the great power that came with such a weapon. She does not love the sword’s name, but it is etched into the blade. Daria has never let the Feather blade far from her reach.

Diet - Daria, like all carriers of the Fire Blood, eats almost 100% meat. Instead of prepared and packaged meals sold in the markets, Daria likes to go out alone and hunt game of all sizes. She hunts in the outskirts of Centrum, where she can snag deer, jackalope, moxie and rabbits. Daria is an excellent cook; she has her own proprietary methods for preparing any wild animal that she could find in a hunt.

Allies - Daria works for the United Gloridax in one of the most powerful capacities: Captain of the Dragonsguard. She has sworn allegiance to the Suam until she dies, and beyond if necessary. In her day to day life, Daria tends to make friends with the criminals locked in the Gloridax dungeons. She knows that they are doomed to die and be forgotten in the dungeons, but they are usually good for conversation.

Enemies - Gloridax society is difficult for Daria Dragonscale. She has a family name that her mother and father (both deceased) begged her to gracefully protect, but she could not care less. She must even attend societal events where the wealthy dress in absurdly extravagant garments and parade themselves around like walking jewels. Daria hates that she must smile and play along with these charades, but many of the most powerful Dragons see things differently. Secretly, Daria would like to burn one of their parties to the ground with them inside. There is also a group of ghoulish women in uptown Centrum that have been spreading rumors about Daria’s refusal to take a mate. If she ever catches one of them on a lonely street after dark, they will be sorry.

Pastimes - There is a place at the Cliffs of Solace where the precipice extends out a ways and all the way to the ocean below, the wall withdraws slightly. It is the only place from the towering cliffs that a person of flesh and blood could ever hope to survive a jump. Daria has already jumped five times; for her it is the most exhilarating feeling imaginable.