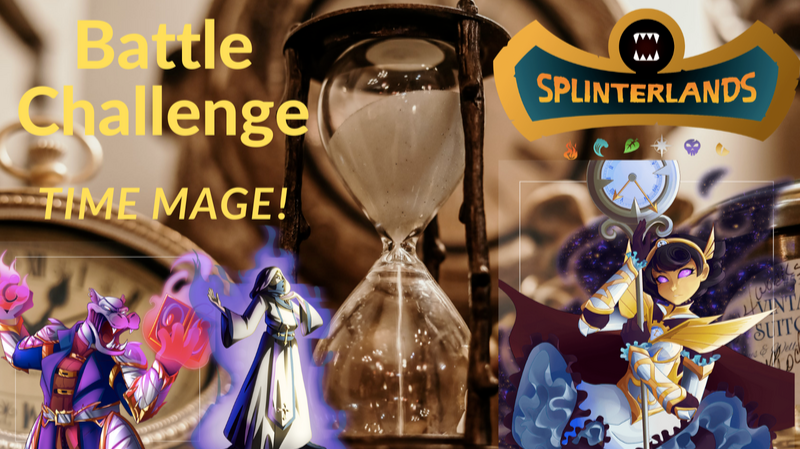 Hello, hello! We have another Battle Challenge and it's theme is the Time Mage!

I will go into depth about the card, my thoughts and strategy and more down below. If you want to check out the full battle, click here. Time Mages are members of the Order of the Silver Shield and close associates of the Wizards' Council. They are trusted to peer through the fabric of time and reality to foretell the future or manipulate the present by slowing the flow of time. They can also speed up the aging process of armor, causing it to rust prematurely.
However, with such power also comes great risk. The future is ever-changing, and the ripples of time can affect everyone. Time Mages must undergo strict training to ensure they don't abuse their power and use it only for the most dire of circumstances.
(From the Splinterlands Lore)

Time Mage has Slow (-1 Speed to all enemies) at level 1 and gains Rust (-2 Armor to all enemies) at level 5.
Chaos Legion added a very cheap and powerful summoner with General Sloan, who mainly relies on ranged attack monsters. These are not the fastest and they hit armor first, so taking away the enemy's speed and armor is amazing. While doing all that, Time Mage also deals decent magic damage and only costs 4 mana, so there's a lot of rulesets and mana caps to fit her in.

I believe this is one of the strongest Chaos Legion life cards and a must have in every deck!

The ruleset was super simple. Standard, 24 mana and all splinters playable. This was perfect for my line up, because speed is very important in this mid'ish mana range, where going first and taking out an enemy monster can make a huge difference.

My idea was to have Pelacor Arbalest as my main damage dealer with Double Strike and the General Sloan buff. In order for him not to miss and not be the last monster to attack I put in the Time Mage and because she has magic attack and can attack from the first position I put her in the off-tank spot. To ensure the Arbalest wouldn't die instantly I put in the Truthspeaker with Protect and Chaos Knight as main tank in front. Finally a cheap Chaos Agent in the last position to protect me against sneak attacks. I felt pretty happy with the line up overall.

Lets see how I did!

My opponent plays a death team with two sneaks and a snipe. I'm well prepared against the sneaks but I have no protection against the snipe, because it's magic. This could be truble...

Time Mage opens fire on Cursed Windeku and takes the snipe hit from the Death Elemental in return. His two sneak attackers take out my Chaos Agent, but that's what he's here for. 3 damage blocked, that would otherwise have taken out the Pelacor Arbalest! With the buffed Double Strike Arbalest deals 6 damage to Cursed Windeku, low enough for Chaos Knight to take it out. Looks good so far.

Time Mage starts again and kills the Chaos Agent, but in return gets taken out by the Death Elemental. Luckily the Undead Badger attacks first, only dealing 1 damage to my Pelacor Arbalest's armor, so that it can take another hit from the Silent Sha-vi. Unfortunately the enemy's Life Sapper get's it's Speed back, because Time Mage is no longer with us and attack's first, gaining one life to a total of 4. This is bad, because now my Arbalests wastes his two attacks and full 6 damage on it. Chaos Knight takes care of the Death Elemental, which came all the way to the first position to say "Hi".

Silent Sha-vi first to take out my Arbalest, leaving me with only the Chaos Knight to deal damage. Because of it's Shield ability it takes no damage from the Badger and kills him in one swoop.

Who would've thought that my tank is the last one to stand. Luckily for me there's no more magic damage left on the field. The Sha-vi attacks first, but only deals 1 damage, because of the Shield ability, while I deal 2 in return. 3 armor is exactly enough to last long enough to take the Sha-vi out, leaving Chaos Knight with a slither of health at the end of round 6. There's a lot to talk about.

First, I'm very surprised by how strong the Protect from Truthspeaker was and am super happy, that I grabbed one off the market yesterday. Initially only there to protect Arbalest, it came in so handy with the Chaos Knight's Shield at the end!

Second, the Chaos Agent in the back was also super important, especially with the +2 Armor, because it gave Pelacor Arbalest enough time to go to work. This part worked as planned.

Finally the Time Mage. Unfortunately the Slow didn't have that much of an impact, because the enemy's monsters were still fast enough to attack first for the most part. On the other hand it did deal some damage and took two snipe shots, which otherwise would've hit the Truthspeaker.

With that being said, I still absolutely stand by what I said earlier and that's that the Time Mage is an awesome card and a staple for modern life decks!