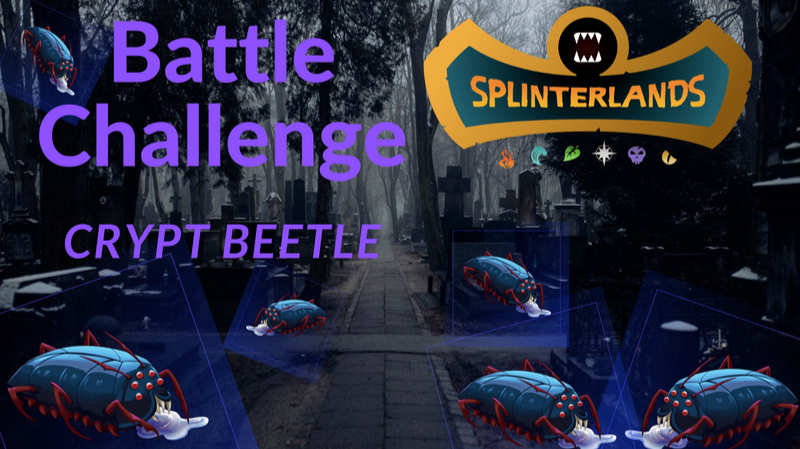 We have another Battle Challenge and it's with the Crypt Bettle. I will go over the card, my thoughts on it and my strategy for battle in the following. If you want to jump ahead to the battle you can watch the full battle here. Any explorers that delve too deeply into the crypts, mausoleums, and necropolises of the world will find a foe they are unprepared for. Not undead, not liches, and not other monsters that can be found in the deep. Instead, tales are told of the crypt beetles. Enormous insects that are found feeding on the corpses within. Most explorers think they are a mere nuisance and will try to scare them away from whatever tomb they are choosing to rob.
But things don't end well for those explorers. These large beetles will defend themselves and their food aggressively. And any explorer that makes it back out alive will have impressive scars to show from the crypt beetle's bite.
(From the Splinterlands Lore) Crypt Beetle is a Chaos Legion death splinter card. It only has one ability - Shield. Leveling up the card will increase it's stats. With it's low mana cost, armor and Shield I think it's best used in very low mana battles as a tank or in the very last position as a sneak blocker. The best ruleset for it is arguably Equalizer, because it can get very high HP this way and be a really good tank.

I used to have a silver level death deck and found my self playing it quite a bit. From the aesthetic point of view not my favorite card though. Not a big fan of roach-spiders...

Very simple ruleset with 30 mana, standard rules and every splinter playable. Not much to talk about here.

There's quite a bit to talk about here. First: 30 Mana is usually too much to play Crypt Beetle as a tank in the first position, because of it's low HP. That's why I decided to use him in the very last position to absorb enemy sneak attacks. I chose Drake of Arnak over Thaddius, because the one armor often helps a lot, especially when you have a monster with Shield. Since Silent Sha-vi is one of the strongest CL death cards I had to throw him in and because we always want to focus fire as much as possible I used the Undead Badger with sneak as well. Dhampir Stalker found a place in the line up simply because I had so much mana to play with and because of his good damage. Finally the Life Sapper. Putting him in the middle, with the armor from Arnak I thought he'd be life leeching all day long until he's super tanky.

But lets see how I did!

My opponent plays a death team as well, but with Thaddius. Two Sneaks, like me, two snipes and a tank and off tank with Riftwing.

He starts attacking with his Death Elemental, which has magic attack and therefore ignores my armor. On top the -1 Health from Thaddius has my Life Sapper at one health and it instantly dies. Really not what I had planned it do...

The Cursed Windekus trade blows, but because of my +1 Armor mine comes out on top. Also his Sha-vi only deals one damage to my Crypt Beetles armor in the back while the Undead Badger doesn't deal any damage due to the Shield at all. In turn my sneak attack pair takes the Mantoid down to 2HP and the Dhampir Stalker does the same with their Cursed Windeku.

We lost the Life Sapper which hurts a lot, but otherwise we're looking pretty good.

The battle commences: The Death Elemental goes first again but my Dhampir Stalker can take the hit with it's 4 HP. My Cursed Windeku takes out their's and my sneak attacker pair also takes out their Mantoid, before it can attack.
On the other side their Silent Sha-vi only hits Crypt Beetle's armor again and the Badger deals no damage again. Man I love the Shield ability.
Because of all the monsters dying the Riftwing got up to 8HP but my Dhampir Stalker chucks some away with a big 3 damage attack.

Dhampir Stalker again rather easily takes the 1 snipe damage from Death Elemental (there's also a bug with the 0 armor being displayed). Everything else pretty much just trades damage. My sneak attackers hit their Sha-vi. Their Sha-vi finally manages to kill the Cryp Beetle (which will probably get awarded a Purple Heart for it's sacrifices) and Windeku and Dhampir Stalker hit the Riftwing, but because it got +1 Health through Scavenger again it barely survives.

Death Elemental (which by now has become a bit annoying I must admit) takes out Dhampir Stalker and Cursed Windeku misses his attack on Riftwing. But my Silent Sha-vi takes out the opponent's one and my Badger (because of it's 1 Armor) survives the enemy's Badger attack and then takes it out in return.

Round 5: Death Elemental attacks one last time, before going down to Silent Sha-vi.
Round 6: A lot of misses against the Riftwing, but it can't attack back and luckily for me in bronze league it doesn't have Backfire yet.
Round 7: Riftwing dies. First things first: The Life Sapper dying from the first attack in the very first round was one of those moments where you just think fuck.

But and this is a big but: The Crypt Beetle absolutely carried this battle. It took a stunning 9! damage, before it went down. If you look at the line up again, that would've been Dhampir Stalker and Undead Badger dead and Silent Sha-vi's armor gone. This allowed my sneak duo to go to work on their backline and slowly but steadily take out one monster after another. The Drake of Arnak also proved itself to be very valuable and has me thinking about purchasing one for when the ranked rewards changes go live.

All in all I think this battle showcased perfectly how good the Crypt Beetle can be, even when it can't attack or has increased health from rulesets like Equalizer. For the current price, definitely a must have in my opinion.