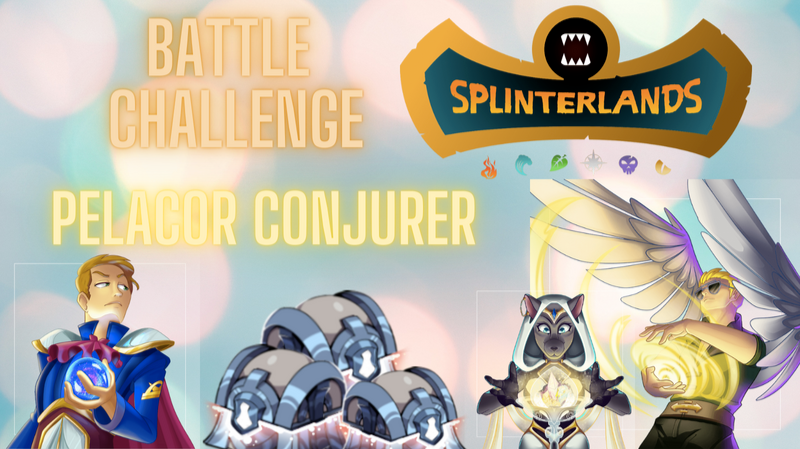 It is Battle Challenge time!

This weeks theme is the Venari Knifer. I do own a copy, but it isn't leveled up and because ranked play is very competitive right now as everyone is trying to maximize win rate for higher rewards, I decided to use a different card in this weeks challenge.

I'll go over my thoughts on the card and my line up and strategy in the battle. If you wan't to skip right to the action here's the full battle. Pelacor Conjurer is a Chaos Legion reward card for the life splinter. It get's up to 4 abilities as you level it up:

It also comes with high speed and health, especially for only 2 mana. This card is an amazing tank in low mana games, because it can dodge melee and ranged attacks with flying + speed and in silver league it also reflects magic damage back at the enemy. This combined with the amplify ability can be especially deadly (and the new legendary life summoner will give everyone amplify).

It is also still obtainable through playing the game and opening reward chests or can be bought very inexpensively on the market.

The ruleset was Equalizer with 14 mana and Fire, Water, Life and Death available to play.

This is because everyone gets a lot of health if there's a high health monster on the field and you need damage to cut through this.

I saw that my opponent played death a lot and they have decent magic damage, thorns with Cursed Windeku and good sneak attackers. I decided to play Pelacor Conjurer as my tank and Dax Paragon behind that to counter any magic. Venari Crystalsmith for the heal and 3 damage with General Sloan buff and Celestial Harpy to fill the last 2 mana. I thought about bringing another archer, but Harpy deals the same damage and has better speed and abilities. Soul Fiend at the very back to protect against eventual sneaks - better safe than sorry.

The strategy was to have a first position tank that they can't take down and that reflects damage back, slowly taking away their health so Celestial Harpy can finish them. Pelacor Conjurer offers good defense against melee/ranged attacks with its high speed and flying and good defense against magic attacks with the magic reflect. Combined with the high health and heal from Crystalsmith it should be hard to kill it. It also has no attack so it can't kill itself in case they bring Cursed Windeku.

Let's see how I did!

My opponent didn't bring any sneaks nor Cursed Windeku, but they did bring magic damage. The Dwarf with snipe looks annoying on first glance, because it doesn't attack my Conjurer. At the same time it only deals 1 damage and Dax has 6 health he has to go through, though. They also nerfed my health by 2 with Thaddius and the weaken from Undead Priest, but I'm not too concerned about this either. Finally a Haunted Spirit upfront with good damage and heal, but not the fastest with 2 speed - let's see if we can get some misses.

We start off with 6 damage against the Haunted Spirit, before it heals and hits my Conjurer for 3. Undead Priest deals 1 damage to Conjurer and 2 damage to himself because of amplified reflect. And Dwarf deals 1 damage to Dax. No deaths in the first round.

Round 2 commences and right off the bat we heal our Conjurer back up to 4 health and take out the Haunted Spirit. That's the scariest monster down in round 2! Undead Priest again deals 2 damage to himself and Dax has no problem with the 1 damage from the Dwarf.

Conjurer getting healed, damage is being dealt. Same procedure as the round before. We get a nice dodge against the Chicken. They don't have enough damage to go through my heal at this point and it's just a matter of time.

Round 4 we take out both the Chicken and the Undead Priest, while healing Conjurer back up.

One lonely Dwarf that's being dealt with before it has a chance to attack. The strategy worked perfectly. They didn't manage to kill Pelacor Conjurer and I was able to deal enough damage to take care of all of their monsters. I do think they made a mistake with the Dwarf and if they had brought something else to also attack the first position, things might would've been closer.

I can't stress how good Pelacor Conjurer is enough. Especially in combination with Venari Crystalsmith and General Sloan, you get an amazing tank, heal and good damage for a total of 10 mana. Both the Conjurer and Crystalsmith are reward cards that you can get from playing or pick up for a couple of cents on the market.

My entire team (without General Sloan) costs about $18-19, all cards leveled up for silver. Their Dwarven Wizard alone costs $15, not to speak of the gold foil cards (Undead Priest is $160 per BCX and it was level 3!). That again shows that it's not always about buying the most expensive cards and that the new Chaos Legion and Reward cards are very strong and competitive.