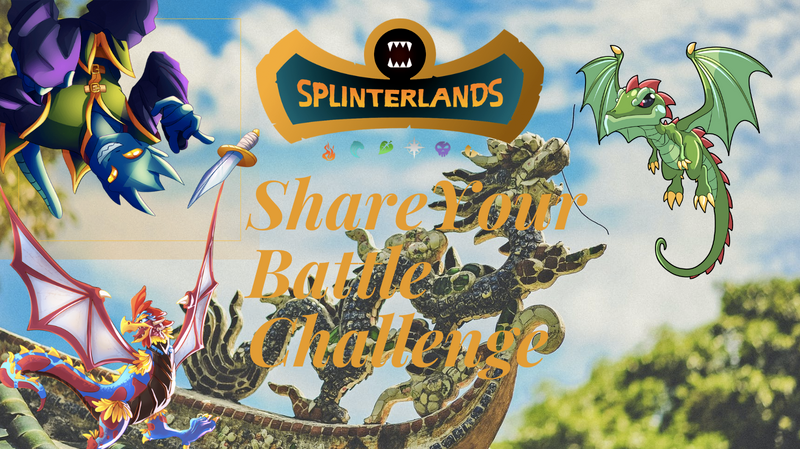 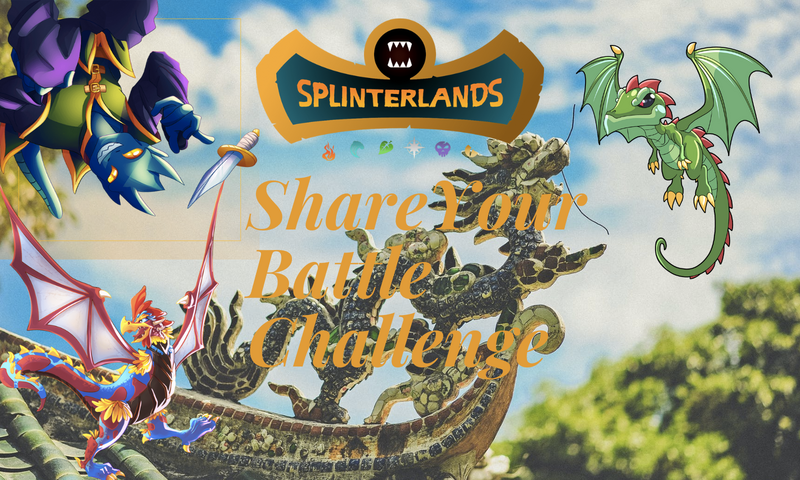 Hello everyone! This weeks Battle Challenge features Dragons and here is my take on it, enjoy.

Since the theme is Dragons there's no one specific card to cover and I did use multiple dragons in my battle. I do want to highlight one card in particular, though and that's the Djinn Chwala, because I used him in multiple battles I did for this challenge. So here's my in-depth analysis.

The Djinn Chwala is an epic Chaos Legion rewards card with multiple abilities, depending on it's level.

For the purpose of this battle I will take a closer look at level 1, where it has Thorns, 2 melee damage, 5 armor and 9 health! What a beast. Not only is it one of only 3 monsters with Thorns at level 1, but it's stats are truly amazing. Considering you can pair this card up with any other splinter's monsters, because it's a dragon, there is tons of potential to heal and repair it, so that the enemy monsters will kill themselves when attacking. I'm a huge fan of this card and it's so cheap right now, that it's a must have!

The ruleset was fairly limited. Magic hit's armor, only even cost monsters, 42 mana and only life and dragon splinter. This fitted my decks perfectly, because I have a Quix the Devious, which is a dragon splinter who decreases the enemy ranged damage by 1 and since a lot of people use General Sloan when playing life (who gives everyone +1 ranged attack), this was a perfect fit. But more on this in the strategy.

Quix the Devious as my summoner, because dragons and -1 ranged is strong against life
Djinn Chwala as tank in the first position, because of the high survivability and Thorns.
Twilight Basilisk in the second position for some cheap damage.
Lunakari Mistress for damage.
Time Mage primarily because of the slow, but the magic damage always comes in handy.
Venari Crystalsmith as support with the Tank Heal to keep Djinn Chwala alive longer.
Naga Assassin at the very end to protect against enemy sneak. Yes, she's only got 2 HP, but with the -2 Speed debuff and her 5 Speed she has good chances to dodge attacks and if she does the Backfire is really nice.

Like I said before, the ruleset was heavily in my favor. What I like to do with Quix in general is to further slow down the opponent, so that either I get a lot of dodges or can attack first and take out their monsters before they get a chance to attack. The line up was sort of a little bit of everything. Nerfing their speed and ranged attack, having a big tank against melee (Armor + Thorns), a heal to keep him alive, a sneak protect and decent damage from all my monsters. My opponent plays a General Sloan ranged attack team, like I anticipated (wasn't really that difficult) and from the very start I'm denying him his +1 ranged attack buff and also slowing everyone down to 1 speed (except for the Time Mage). We both only have monsters who attack the first position, so that's what's happening. While my opponent deals one more damage to my Djinn Chwala initially, his Thorns damage the Eagle in the second position and because of the speed advantage I will attack first next round. Round 2 I went first and took out both his Shieldbearer and Eagle, before they could get one attack off. I then only took one damage from his Time Mage, before my Crystalsmith heals Djinn for 3 HP, giving him enough health to take the rest of the enemy's attack's for this round. He does die while doing so, but that's two full rounds of damage tanked! Round 3 & 4 In Round 3 the speed advantage was the most severe. I manage to kill every single monster, before they can attack, except for the Tower Griffin which unfortunately for him ends up in the first position, where it can't attack and quickly get's taken out in Round 4. The plan worked really well. I would say it was two different strategies working together. 1) Taking away the ranged attack buff from General Sloan, which really helped Djinn Chwala survive so long and 2) slowing the opponent down so much, that I attack first every round. Even though most of the enemy's damage came from ranged attacks, which don't trigger the Thorns ability, it came in very handy against the Shieldbearer and Eagle. In terms of MVP's I'd say Quix and Djinn Chwala, but the second slow from Time Mage, the 2 damage for only.4 mana from Twilight Basilisk and the heal from Venari Crystalsmith all worked so well together. Only thing I could've changed is the Naga Assassin, because they didn't bring any sneaks, but you can't know that for sure before hand. Dragons are always super fun, because you can play them with any other splinter's monsters which makes for some great combinations, like the double slow.

10 Commandments of Crypto Investing for Newbies