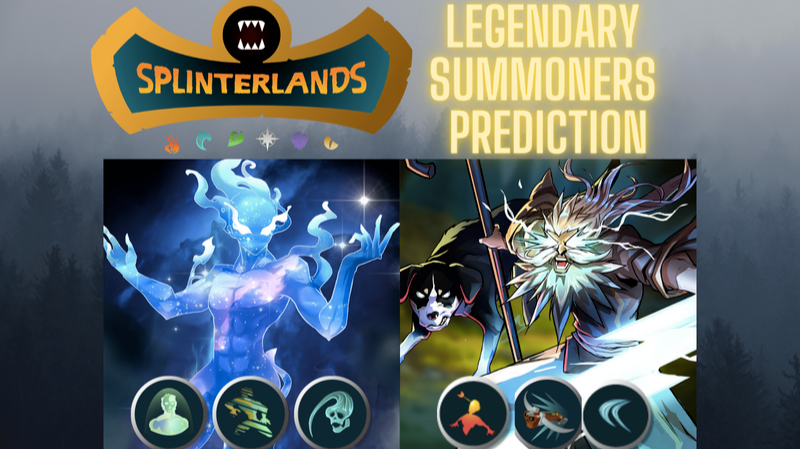 we got the stats for the first legendary Chaos Legion summoner. Every content creator has already dropped a YouTube video with their thoughts on the card and I think the general sentiment is that it's not as strong as the Untamed summoners and it doesn't look to be broken or meta defining on first glance.

My two cents on the card: I think they did a fantastic job of creating a balanced, yet effective card that fits perfectly into the life deck. It's a defensive support card, what life is known for, has some good synergies and 6 mana is something we don't have with other summoners yet. Depending on the price I'm going to look to max one for silver league, but I won't be too disappointed if I won't get it.

What I'm most excited about is that we now know the general direction in which the new legendary summoners are heading: 6 Mana, 2 Abilities, 1 Stat

I think they will tweak this a little so that maybe some summoners only have one ability, but a strong one and others will have more stats etc. With that in mind I want to take a look at the other two summoners we have artwork for and take an educated guess on what their stats could look like.

Couple of things to get out of the way first.

Abilities that are already on other modern format summoners and therefore unlikely to be on the new ones:

Out of these I could see Snare and Piercing being used again as those are "only" on rare summoners and not the strongest abilities. Maybe also True Strike as it is on Kitty, which is kind of overpowered and would counter her and the speed meta a little bit.

Abilities that are too strong on a summoner and would break the game:

Abilities that also would make no sense:

That leaves us with the following abilities available: It looks like a spiritual-ghost-non-material-thing and the name says the same. First things that came to mind here were Phase and Immunity. Immunity would be really strong on a summoner, as the team couldn't get de-buffed (-Health, Attack, Magic, Speed, Armor and so on) and would kill Noxious Fume rulesets. As the death splinter doesn't really have a lot of cards that buff their own stats (Inspire, Strengthen, Swiftness) this would actually be okay in my opinion and give some nice variety in Noxious Fume rulesets to Llama, which is just dominating as of now. Phase would also make a lot of sense, but then death would have 4 summoners that are countering magic in some way (Thaddius -1 Magic, Owster Magic Reflect, Mimosa Void). It would definitely need something strong to go along with it. Backfire would be fitting for this card and would go well with Phase. Maybe +1 Speed or -1 Speed as a stat is something I could definitely see. Also fits the ghost-theme we created. Oppress is also something that's not too broken, but can be very strong t in certain situations and would give death a bit offensive power. The Dispel icon looks a lot like the summoner artwork, lol. Since death was always a de-buff, counter type of splinter this would fit a legendary summoner perfectly in my opinion. As death also has a lot of cards that can hit different positions (Sneak, Snipe, Opportunity) this would make sense when trying to dispel as many opponents as possible

With modern format the older death summoners Zintar Mortalis and Crypt Mancer, which both gave -1 Melee Attack, are rotating out and death being that de-buff/ counter splinter, I think it could be very likely that Astral Entity gets -1 Melee Attack.

For me some realistic stats for the card could be: This one looks like some sort of Greek God (hello Zeus). I don't know this for certain, but my guess would be that the Immortal Gods guild is designing this summoner. First things that came to mind were magic, because of the lightning bolts and some sort of range/hunter/druid (because of earth being very close to nature and the dog).

We already have magic on Obsidion, but the water Beta summoners Alric and Valnamor also both had +1 magic. On the other hand Prince Rennyn is rotating out with modern format so something with range would definitely make sense.

Snipe would fit the hunter-theme and compared to Opportunity doesn't seem too broken to me as there are lots of counters to it. However this paired with a stat that gives + Attack would be too strong in my opinion. It would be a nice counter against something like a Yodin team, that uses a lot of ranged attackers. Close Range would fit the ranged-theme and earth has quite a few strong ranged attackers which would benefit from that. Maybe with something like +1 Ranged Attack and we would have a very deadly offensive earth summoner. Cripple fits the dog. Dog - Bone - Cripple. This is one of those more underwhelming abilities in my opinion, but would fit in well as a second ability next to a slightly stronger one.

Dodge fits with lightning bolts which remind me of Speed and would be a strong yet not broken ability, as there is a direct counter to it with True Strike and the True Aim ruleset. There's also a lot of high speed cards and earth tends to be a bit on the slower side of things, not making it look broken on first glance. Scavenger again fits the hunter/druid/nature-theme. This could potentially be very broken, as earth already has some high health cards and good supports with Heal and Protect. Depending on what else Immortalis would get I might see this working and going in the Scarred Llama and Mylor Crowley direction of earth being a high health, tanky splinter.

I have to say this one is rather difficult to guess, as there are so many possibilities with. Immortalis could be both offensive or defensive, have either magic or ranged attack/abilities.

All of this is obviously pure speculation, based on the artwork of the cards and the stats Grandmaster Rathe. Overall I think there are some interesting possibilities here for 6 mana. I don't think we're going to see a summoner as strong as Yodin or Kitty, but maybe a few that are strong against them. I'm super excited for the next reveals and for the price of Grandmaster Rathe.