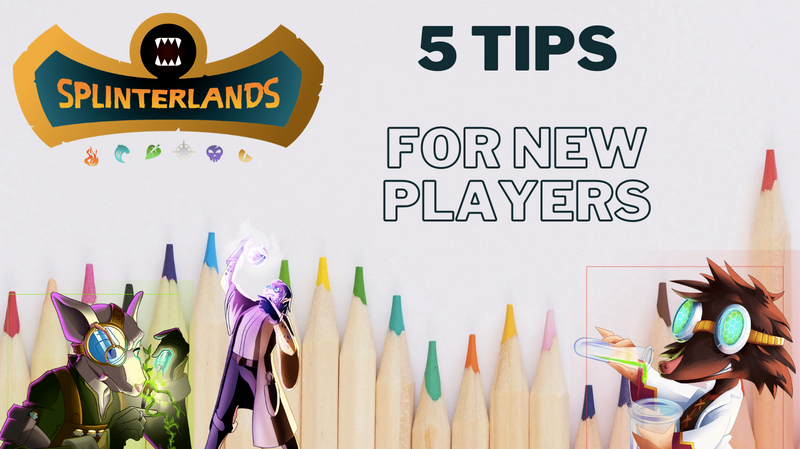 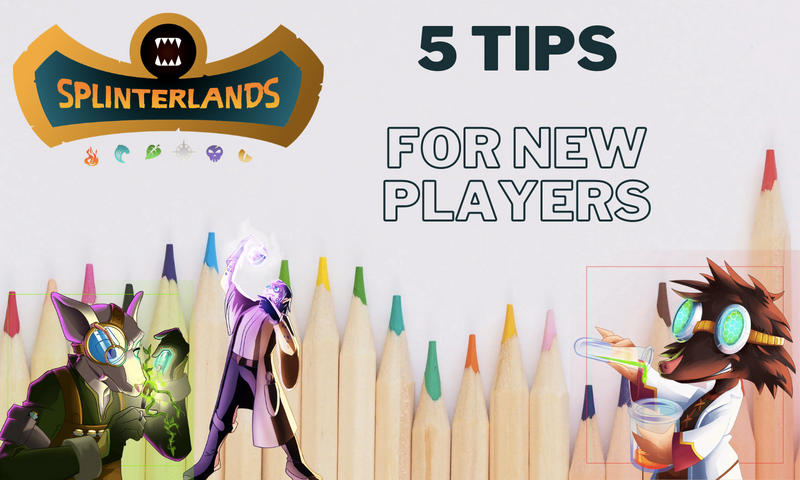 Splinterlands can be quite complex. From gameplay and strategy to earning and markets there's a lot to unravel. This is why I decided to share 5 tips that will hopefully help newer players out. These will cover all sorts of aspects of the game and while some may seem very obvious other's might not.

Without further ado let, let's get into it! Building out your deck will earn you passive income. With the ongoing SPS Airdrop literally every asset in the game can earn you money. Cards are primarily used to play battles and earn DEC and daily rewards through quests, but their collection power also counts towards the SPS Airdrop. So by building out your deck to play in higher leagues you will passively increase your income through the daily SPS Airdrop. These SPS can either be staked to get an APR of 28.7% at the moment, further increasing your passive income or sold to generate funds to keep growing your collection. Either way you're earning! Only combine cards when you can get them to the next level. All cards get better in some way, when leveling them up. Some get new stats, others new abilities. In this example the Pelacor Conjurer gets a new ability at level 4. To get him to level 4 we need to combine 30 single copies. Let's say you don't have the funds to buy 30 copies all at once and are buying a couple of copies every other day until you get to 30. If you have 5, great, you can get the card to level 2 where it has one more health.

If you have 7 copies however, combining all of them doesn't give you any benefit. So it would make more sense to only combine 5 and keep the other 2. Why? Because single copies sell better. Maybe along your way to 30 copies you decide that you need some money for another card or that you don't like the Pelacor Conjurer anymore. In that case you could sell the two single copies, whereas 7 copies wouldn't sell as easily.

On a bigger scale, say you already have 28 copies, combining them all into one card would only get it to level 3. You'd therefore be better off to twice combine 14 cards into two level 3 copies. This way you can play one and rent out one for example. Once you get the missing 2 copies, you can combine your two level 3 cards and the 2 single copies into one level 4 card.

When building your collection focus on one to two decks at a time. Splinterlands incentivizes players to go up in ranks by increasing earnings and rewards in the higher leagues. In order to play in silver for example, you don't need every single splinter maxed out. One or two decks are enough. Get these to the highest possible level for your current league first.

Here's a great Video by @version1 who shows how he made it to diamond with only 30 cards. You can check out the full battle here.

This is for everyone who is struggling to get out of bronze league. Bronze can be tough, even for more experienced players, myself included. Whether you're completely new, trying to go up the ranks or are a silver player who starts every season in bronze, this strategy will get you out of bronze in no time.

You rent Alric Stormbringer (5-7 DEC), Axemaster (0,5-1 DEC), Djinn Oshannus (1-2 DEC) and Venari Crystalsmith (0.1 DEC) for a total of 6,6 - 8.1 DEC.
If you are in silver or have a little budget you might already have some of these cards or can pick them up, especially the Djinn Oshannus and Wavesmith are really cheap right now and I would definitely recommend owning them.

The strategy is super simple and straight forward and you don't need to adjust anything, it works against every other bronze line up.

This is the line up, with the numbers being the priorities by which you play the cards depending on how much mana you have.
(0 Alric), 1. Djinn Oshannus, 3. Wavesmith, 2. Axemaster.
So you always play Alric + Djinn and if you can Axemaster. When you have a little more mana you put in the Wavesmith and when you still have mana left you put as many magic attack monsters between Djinn and Wavesmith. And that's it. Give it a try, it works - trust me.
(If you want a more detailed guide on why this works or how you can tweak it, let me know in the comments) And that's it for the first 5 tips. These might all fall out of date as both Splinterlands and the Crypto Market in general are subject to constant change. As for now though, I do hope there's something useful and helpful for the newer players of our community to be found.

If you're not playing already create an account over at Splinterlands.com and hop right into battle
Thanks to Carrie Allen for the amazing Markdown Tutorial
and to Chris Roberts for this Thumbnail Tutorial
Background Thumbnail image is from Pexels
Free image editing software used Canva
Shoutout to VERSION1, check him out.