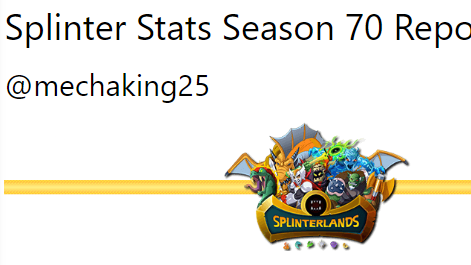 OK so Season 70 how would I sum up season 70 I think I would sum it up as productive, I made a lot of progress in the game and I am getting better by the season, this season it took me only 1-2 days to get into bronze 2 which is better than my usual 4-5 days and I made a lot more DEC this season from my matches than usual as you will see. So lets start looking at my stats.

So let's start off with my rating, this season I almost got to bronze 1 even though I didn't have enough power at the time, I would have rented out some cards to be able to do so. But since I was not able to make it passed 700 rating as you can see above I didn't need to, but hopefully I will be able to next season. I finished with 565 rating not horrible but I still would have preferred to have made it to bronze 1. My win/loss ratio was better this season I don't remember what it was last season but I know it was lower than 1 so it was definitely a improvement. And last my longest streak was 6 this season by best ever was 8 but I wont complain for getting 6 because for new players getting more than 8 is hard enough.

Rewards And End Of Season Chests

So lets start off with the potions since they don't really matter, I got 7 potions is total from dailies and season chests and in all its worth 270 credits I really would have preferred anything other than potions since I have a ton but what can you do. I only got one card this season and it was from my EOS chests but it was a rare and if you care to know what it was it was a Gargoya Devil not the best but it is a card and its better than another potion.

So I earned 7 DEC in total from my ranked matches and its a lot better than usual some of the past seasons I only get around 2-3 DEC sometimes only 1 DEC in all from ranked matches but I think it has to do with the fact that I made it to bronze 2 in only 1-2 days so I had way more time to play and earn DEC.

So I made about the same amount as I usually do in SPS this season but this season I started to stake all the SPS I earn so right now as I'm writing this article I have about 5 SPS staked. So I earned a little more SPS as you can see and its a bit satisfying to see an pretty even 1.6 SPS by the way.

So as I said at the beginning I made a lot of progress in the season 70, I am pretty happy with how it all went and the progress I made if you guys have anything you would like to mention or any comments on this article please feel free to say it down below and I'm interested to see what you guys had for your EOS report so please send me them via my discord and I will randomly pick one winner to earn some DEC.

i am a student and i love reading and writing articles. I also write articles on SplinterTalk and Hive.

My Splinterlands end of season report from a relativly new player who hasint spent a single dollar on the game besides spellbook.