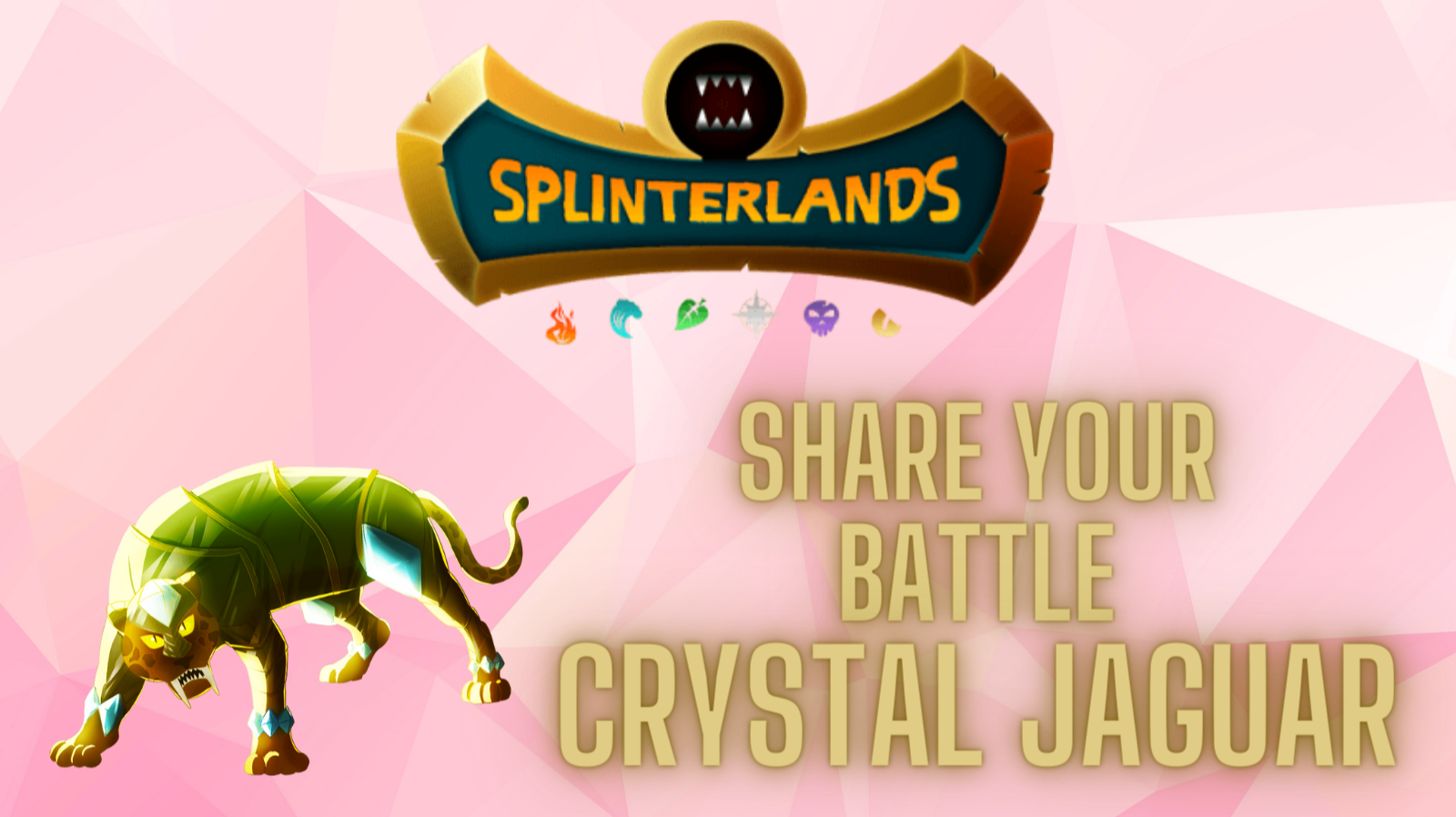 This week's share your battle challenge involves using a monster from the life Splinter.

This monster isn't known for being an offensive powerhouse, it is rather known for its defensive prowess.

Due to its armor, it isn't recommended to attack from close range, otherwise you might get hurt.

Without further ado let's look into it! The Crystal Jaguar is a common untamed card.

With 4 Mana it provides a great choice for a tank for the life splinter. because it starts with 1 armor and 5 hitpoints at level 1.

At level 4 it is able to get the thorns ability, thus making it more painful to beat and improving its defensive power.

At level 9 it is able to become an ever better defensive wall with the Retaliate ability with 2 attack.

The Jaguar is more suited for defense and endurance. The reason for this is that its attack only raises to 2 once at level 6 and it is slow.

The Jaguar have been undergoing the same trend as pretty much all of the cards in the game.

In April the Jaguar was available for less than 3 cents of a Dollar. Nowadays a single Crystal Jaguar will cost you 72 cents, a 2400%+ increase!. For those who missed the chance to access the Jaguar for a cheaper price there is the Rental market as well. It is available for the low price of 0.14 DEC per day at level 1.

Where NOT to use On matches with high mana cost there are other cards that are better suited.

If backed up correctly the Shieldbearer for example has more hitpoints and armor, and you won't get through him.

He is able to become a target of all the incoming attacks due to his taunt ability.

The Jaguar on the other hand is only able to protect the frontline.

Other cards might thus become easy targets from sneak, opportunity or snipe attacks.

The sacred Unicorn is also a better choice for tanking, due to its healing ability.

The Silvershield Paladin is on pretty much the same level at the beginning, on higher levels it might get an edge due to its ability to reflect magic. On Matches with low mana cap the Jaguar is able to shine as it can provide a defensive wall with only 4 mana.

When it comes to Little League there's simply no competition from the life splinter to the Jaguar.

On Noxious Fumes if used correctly the Jaguar can outlive other cards by getting healed, repaired and cured from poison.

For this ruleset it is import to afflict as much damage as you can to your rivals, thus the thorns ability comes in handy.

This Battle took place in a ranked battle.

It involves the ruleset of "Armored Up" and "Even Stevens " and a mana cap of 21.

For this battle I brought Tyrus Paladium at level 3, whereas my rival used Camila Sungazer at level 2.

1. Crystal Jaguar: The Jaguar of the week. Armored Up reinforces its armor.

2. Furious Chicken: At this position it should take opportunity damage or give time to the rest of the lineup.

3. Defender of Truth: Overall a great card from the life splinter. Armor is reinforced and is able to bypass the rival's armor.

5. Alfling Alchemist: With its halving ability it can prolong the life of the tank.

6. Peacebringer: At level 3 it is one of the best cards on the lower levels of the life splinter, as it is able to deal 3 ranged damage.

Overall my rival had the upper hand when it comes to cards, since his summoner was a legendary at level 2. This allowed him to bring a level 3 alchemist and a level 5 failed summoner.

For this Battle Tyrus Paladium is a great summoner. With its bonus to armor my team was getting a +3 armor bonus.

This combined with the fact that my rival didn't bring enough magic attack proved lethal for my rival's team.

This battle was decided by who was faster at getting through the defenses. It all came down to the rival's Centaur and my Peacebringer.

Due to my team concentrating all the attacks on the frontline I was able to get through my rival's Flesh Golem.

Thanks to the alchemist, the golem was only able to deal one damage.

My rival's Centaur did a lot of damage though. Due to its sniping ability it was able to singlehandedly take down 3 cards of mine.

Fortunately for me the peacebringer was in the last position and my rival didn't bring any cards with sneak.

The Crystal Jaguar was instrumental for this battle, its thorns ability was crucial in getting through the Golem who was being healed twice per round.

See you in the Battlefield!

Here is my affiliate link

Posts regarding Splinterlands. Include weekly challenges.