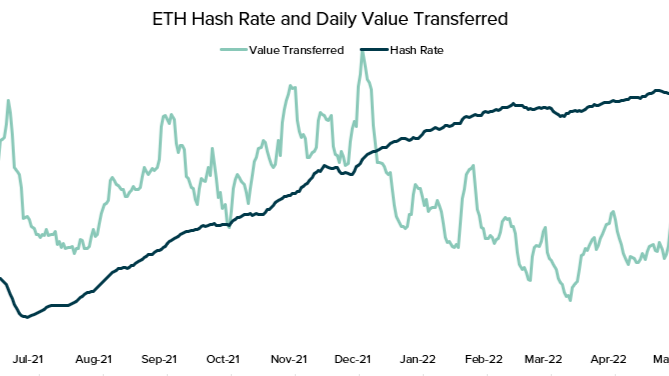 On Wednesday, May 4, the Federal Reserve raised interest rates by 50bps, the largest increase in over 20 years. Markets reacted as the S&P 500 Index and total crypto market cap lost roughly 2% and 10%, respectively. Three days later on Saturday, May 7, UST, the third-largest stable coin by market cap at $18B, lost its peg¹ to the US dollar and began to unwind, creating additional sell pressure while the market was already in a downtrend. The overall crypto market cap has since fallen an additional 15%, for a total loss of roughly 25% since May 1, 2022.

As mentioned in previous newsletters, the Luna Foundation Guard had purchased over $1.5B in Bitcoin and $100M Avalanche (AVAX) to bolster UST’s collateral reserves and diversify out of purely LUNA. The Bitcoin reserves were ultimately deployed, in addition to Ethereum (ETH) sold by institutional investors, attempting to defend UST’s peg. Fortunately, Bitcoin and Ethereum markets were sufficiently liquid to absorb much of the impact from this temporary increase in sell pressure.

As of May 13, the Terra blockchain has been halted and LUNA has been suspended from trading on most exchanges.

Bitcoin appeared to be out of the woods from the UST crisis with a strong start to the day on Wednesday, May 11, but began to sell off again as media coverage of the events picked up, driving Bitcoin to a yearly low of around $25k. Despite being a completely separate network from the UST ecosystem, retail panic across digital assets in general is not surprising. For investors with a long time horizon and conviction in their investments, this may provide an exciting opportunity to build up their position sizes.

Looking at on-chain fundamentals, Bitcoin exhibits signs of strength despite poor price performance and a difficult macroeconomic backdrop. Bitcoin’s hash rate, the amount of computational power required for mining, is at an all-time high according to data from Glassnode – a sign of strength in the network's security. Also, miners have been sending fewer coins to exchanges even as the price falls, indicating a long-term preference to hold the asset over immediate revenue. 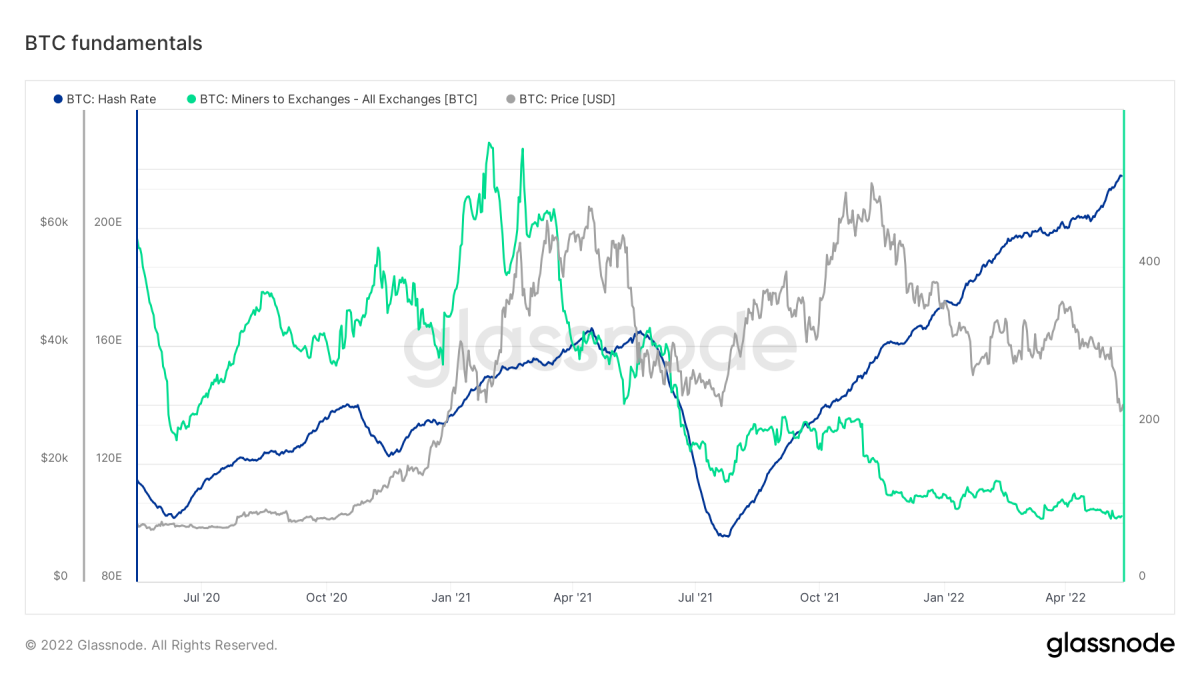 While Bitcoin is the largest and most liquid asset in the crypto ecosystem, Ethereum has also emerged as a high-quality asset to hold during market volatility. Looking at the drawdown from the all-time highs (ATHs), ETH and BTC are trading on par with each other, down roughly 59% and 58% respectively since ATHs at the time of writing.

In some cases, Ethereum has even deeper liquidity than Bitcoin when comparing the top five exchange trading pairs. This becomes especially important when markets are in a macro downtrend — deeper liquidity can result in smaller drawdowns and less volatility.

The Ethereum network is currently in the process of transitioning to proof of stake and, as a result, current miners and their hardware will become obsolete in maintaining the security of the network going forward. The first upgrade that will make Ethereum miners obsolete is expected to occur later this year. Despite the upcoming upgrade, the Ethereum hash rate is at an all time high as the network processes over $6B in daily value transferred, indicating strong trust in Ethereum’s network security.

The Ethereum community also appears highly committed to the future of the network as the total ETH staked in preparation for the transition to proof of stake continues to increase. Over 12.5M ETH (roughly $25B) has been staked as of May 12 and can not be unstaked until the implementation of shard chains expected to occur in 2023. 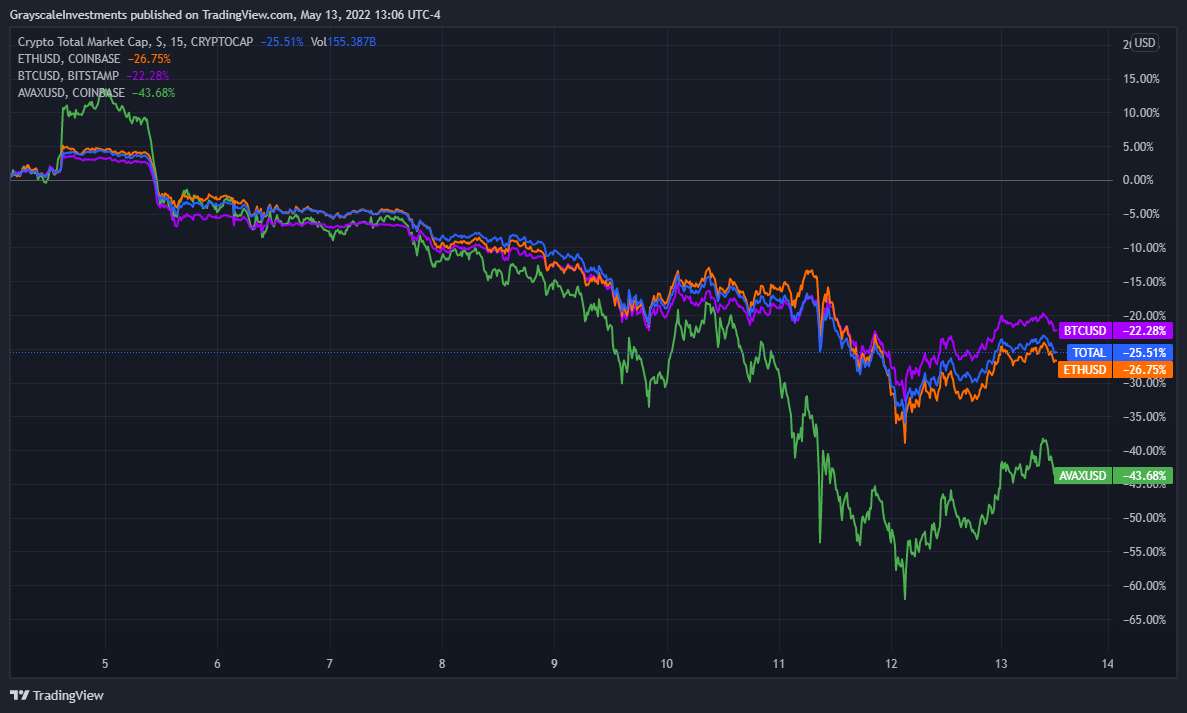 Protocol revenue – the transaction fees paid to the protocol separate from gas fees – is a simple but important metric to help understand which decentralized networks people are paying to use. Ethereum’s protocol revenue dwarfs the rest of the market in part because of relatively high transaction fees, but more importantly, because people are willing to pay to use the network. This extends to the decentralized applications (dApps) built on Ethereum. For example, dApps on Ethereum will produce higher revenue numbers on the same transaction volume compared to their counterparts on Solana, due to Ethereum’s higher network fees.

More surprisingly, Avalanche found itself in the top revenue generating protocols not only in the past 30 days, but also over the past year. As a next-generation smart contract platform, Avalanche touts fast transaction speeds at low costs. Despite cheap transaction fees, enough users are paying to use the network that it is able to generate competitive revenue to Ethereum-based projects. A large driver of increased network activity is the immensely popular Crabada game, with over 7,000 daily users completing roughly 500k transactions per day over the last 30 days, according to data from DappRadar. Network activity is crucial in driving value to the network and to token holders, so it is important to see sustained dApp usage over time. Video games tend to create deeply loyal communities, which means gaming could be a strong vertical for Avalanche to capture.

At the peak of this crypto cycle in November 2021, Avalanche fees skyrocketed from fractions of a penny to over $1 for transfers and $8 for token swaps – crazy. Right? Still, compared to Ethereum, Avalanche was more than 10 times cheaper to use. And, despite the increase in transaction fees, the number of daily transactions on the network continued to grow. Since then, the team behind the Avalanche network, Ava Labs, has released new features like subnets, which present an opportunity for the network to achieve hyper-scale.

The fallout of UST and LUNA coupled with efforts by the Federal Reserve to slow the economy and tackle inflation may have shaken the confidence of many retail investors and created sizable losses for institutional investors backing the Terra ecosystem. As a result, we believe we’re likely to see a consolidation phase into the larger crypto assets like Bitcoin and Ethereum. The losses experienced by institutional investors may result in decreased venture funding for new and existing protocol teams, as well as a consolidation of capital around teams building core infrastructure for the ecosystem. Historically, these times have been when the most important crypto protocols were developed, such as Ethereum after the Mt. Gox hack of 2014, or MakerDAO and Uniswap after the crypto market crash in 2017. Despite an overall bearish sentiment from the market, crypto fundamentals look strong and are continuing to push new highs like the Bitcoin hash rate – a crucial metric in understanding the security of the network.