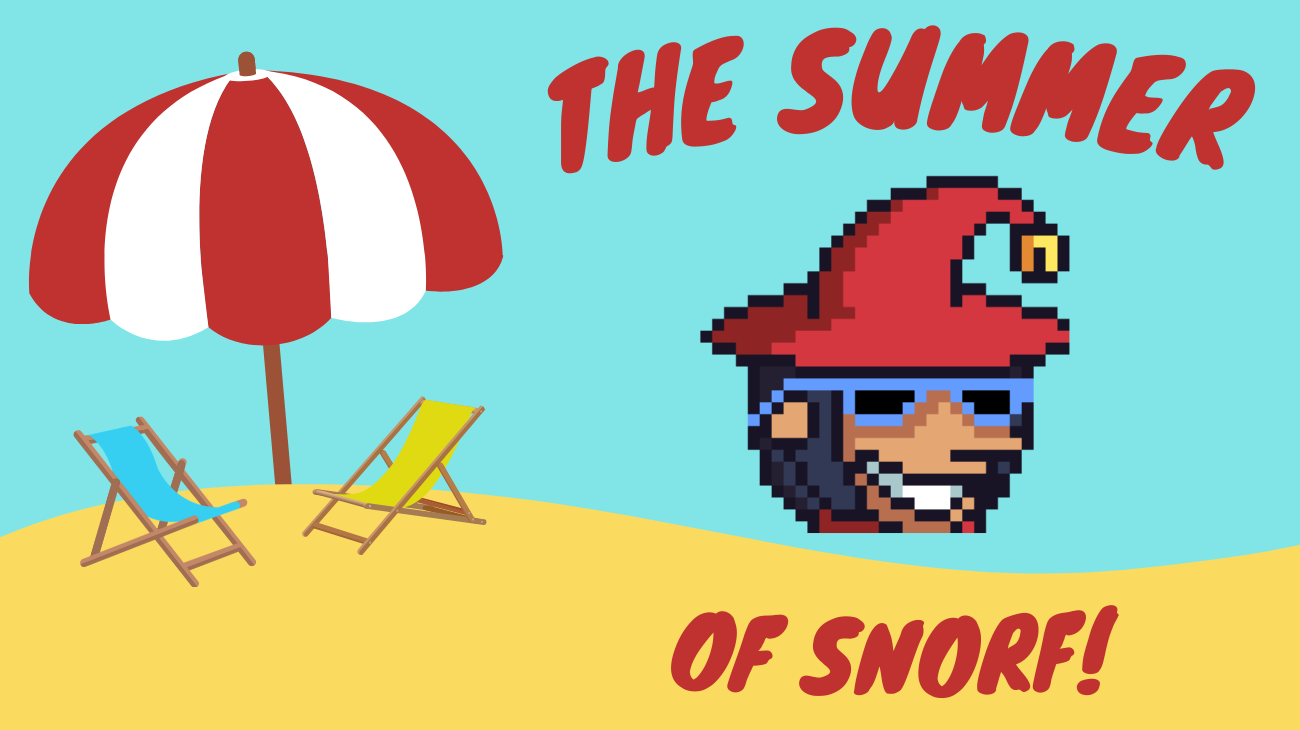 As you all may have recently seen, the summer of Snorf is here. As you saw last week, a lot of time has been spent focusing on the upcoming Snorfkingdom community and website, but Sir Snorfkin wants to keep you informed on the latest as best as possible. In addition, there are some really exciting updates to share with regards to the Snorfkingdom! So, let's dive in, as you are likely wondering what has been going on recently in the blockchain universe that is notable?

Mythical Games, the gaming company led by a big-name team, most well known for Blankos Block Party, has recently announced a major investment round in their organization. The major investment announcement will allow the company to build its capacity and ramp up the speed at which it is creating blockchain based games, as well as its dedicated NFT market, the Mythical marketplace. Regardless of whether or not you have played blankos or heard of Mythical games, this major investment round shows that the hype around blockchain gaming is not only here to stay, but that major players see the inherent value of NFT and blockchain based gaming ecosystems. Thus, this news is exciting both for the Mythical team and for blockchain gamers everywhere!

Yoshidrops, the newest project collaborating with the Uplift

As seen last week, the Uplift is pushing along with some interesting new collaborations across the blockchain universe, but this week stands out for the recent collaboration between the Uplift and Yoshidrops. Yoshidrops, whilst still not 100% clearly defined, claims to be a carbon-neutral NFT project aimed towards music lovers and musicians. According to the website, "YoshiDrops is a collective of international rising stars and celebrity content collaborators delivering monthly music NFT drops while aiming to make the entire NFT industry carbon negative." Whilst the collaboration with the Uplift is certainly interesting, it is not exactly clear what this will fully entail. For now, it seems linked to the generation of Upliftium, the Uplift's new native currency. This is an exciting project to look into, although it would be wise to be weary of the carbon-negative claim until the secondary sales market of yoshidrops can be verified to be offsetting the impact of creating the NFTs. Nonetheless, this project has noble and inspiring aims and brings a positive light to the blockchain universe!

Shout out to @theluckyswede for the tip on this news update!

The Splinterlands community has had an incredible week, there is no doubt about that. The game's inaugural land release has sold out, with 150,000 plots finally sold! That's not all, just yesterday, even more exciting for the game is the sellout of the 1.5 million "Untamed" card series, the first of its kind in the game. This means that holders of Untamed series have their hands on the only cards of this group that will ever be issued. To top off all of this, the Splinterlands team announced a collaboration with the Yield Guild Games (YGG) group, a group which has become famous for its play to earn documentary and approach to supporting their community generate some income with play to earn blockchain games. The group is likely most well known within the Axie Infinity community, but that doesn't seem to slow them down.

As a final piece of news, Sir Snorfkin has acquired some Splinterlands land plots to add value to the upcoming Snorfkingdom community, so stay tuned for more as the land plots functionality becomes implemented in the game!

Haven't started playing Splinterlands and want to do so? Check it out here

If you are following many blockchain gaming projects, you will have likely heard about the Cutting Edge Gaming Conference (CGC). The conference had some extremely insightful panel discussions on the future of NFTs, blockchain gaming, and discussions about the evolution of gaming itself when disrupted by innovative technologies. The conference was so popular, that the organizers extended the conference by an entire day! While not gamified like the DYGYCON 3 conference, CGC saw a host of very experienced blockchain gaming industry professionals come together to give their insights on the latest updates and share valuable opinions. Want to stay up to date with when the next conference will take place? Check CGC out on twitter

The Snorfkingdom: Getting close to launch!

The moment you have all been waiting for, this week's Snorfkingdom updates are here! Last week, user @Anniqa made a very keen observation on the Atomichub marketplace. Great spot, Anniqa! The dates of these drops are likely to change, as they will be timed to release with the Snorfkingdom website launch. In the meantime, Sir Snorfkin has been working on some major improvements to the way that the Snorfkingdom interacts with a community. The primary aspect of this is to have a communtiy hub, which will be located on Discord. As of 13 June, 2021, the discord is live! This community hub will allow Snorfkingdom travelers and citizens to engage in a deeper way, stay up to date on the latest news and trends in the blockchain universe, and get access to the latest NFT drops and information from Sir Snorfkin.

Is the thought of the discord getting you excited? Even if that's not the case, I've got even more news for you! Sir Snorfkin has been working hard to create a finely crafted treasure for those Snorfkingdom supporters who want to be there from the beginning. What the treasure chest may hold still remains a mystery to this day. Soon there will be more information about what this treasure may hold, and how people can get their hands on some treasure chests to show their support and help launch the Snorfkingdom website. Leave a comment below and let me know what you think might be inside!

Sir Snorfkin is always hunting for the most interesting projects, so let me know in the comments if you know about a project which you'd like to have covered more! In the meantime,