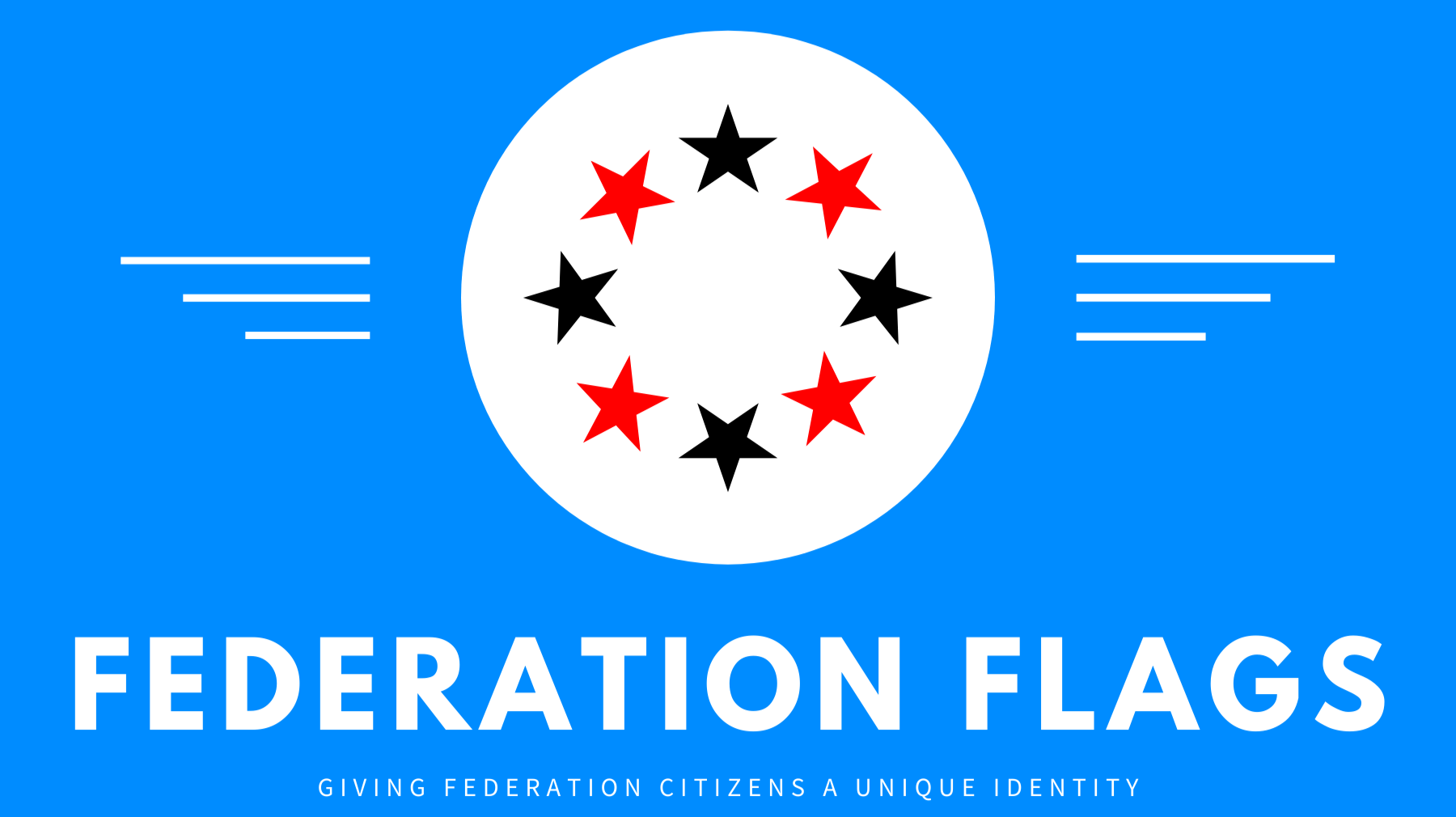 After a brief period of silence, I, Sir Snorfkin, am BACK with more exciting news and updates from the Snorfkingdom! Whether you have heard of it or not, Alien Worlds, the hit blockchain game has achieved the mythical status of #1 Dapp according to Dappradar. From humble beginnings in Alien Worlds, Sir Snorfkin has been actively connecting with the exciting and positive community, learning more about blockchain gaming, NFTs, and more along the way. With the planetary DAO governance, Thunderdome, and Planet Binance updates coming around the corner in Alien Worlds, as well as  the numerous communities taking an active role in giving each planet and land a unique identity, it was clear that there is another element which can further contribute to the unique identity of each planet of the Alien Worlds Metaverse. As such, I am very pleased to announce the release of the Inaugural "Federation Flags" collection, which is already whitelisted on Atomichub! The collection drop will run from 16:00 UTC on 8 May, 2021 until 16:00 UTC on 15 May, 2021, so be sure to participate in the giveaway and launch in order to avoid missing out!

You can find a direct link to the collection drop HERE

Below you can find an overview of each flag and the philosophy behind it, and if you stick around and read until the end, there is a nice GIVEAWAY in store for you at the end of this article 😉. If you don't want to read through, feel free to scroll to the bottom, but I hope you will stop to admire the collection. So, in typical Sir Snorfkin fashion, let's dive in! 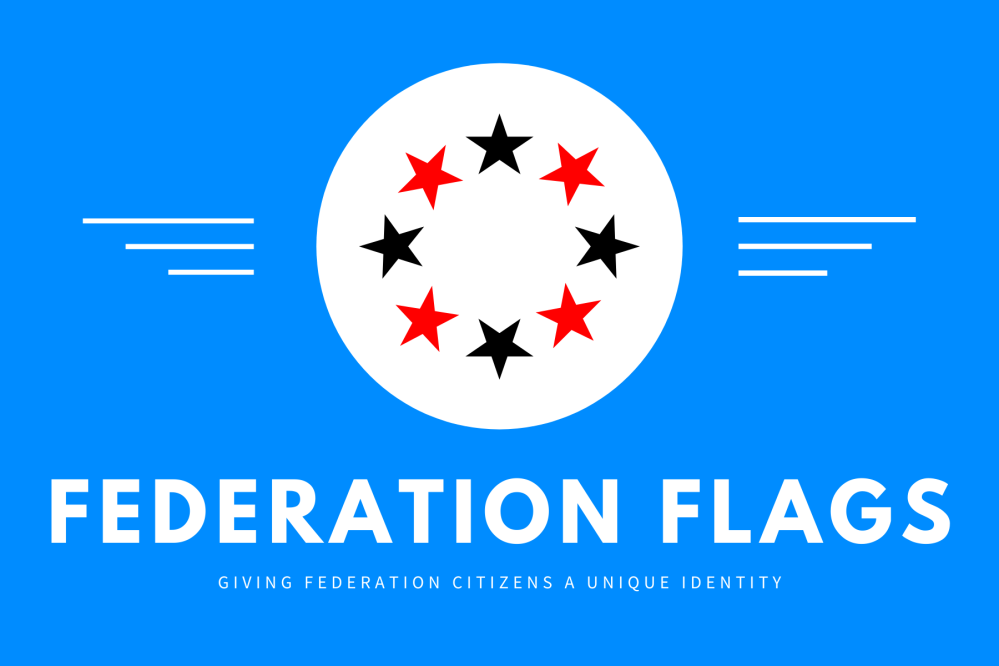 Giving Citizens a Unique Identity (since 2021)

This Flag highlights the essence of the philosophy behind the Federation Flags collection. Sleek, unique, and attractive, the collection makes use of the specific description and biomes of each Alien Worlds planet in order to give the citizens on that planet something that feels truly "theirs." One of the greatest elements of the Aliens World Metaverse is its community, and I hope these flags will further contribute to giving these communities a more holistic identity. Lastly, the idea behind these flags was also to inspire more creative initiatives which incorporate the specific colors and styles of each planet's flag. To all the creators out there, please do not hesitate to contact Sir Snorfkin via twitter if you would like to know more about the colors, style elements, or anything else used in these flags, as I am happy to share these things with you so that you can create Federation Flag inspired concepts! Without further ado, I present to you the Flags of the Federation (in alphabetical order). In addition, Flag collectors will receive a Federation Flags logo collector badge upon collection of a set (or sets) of planetary flags! More info can be found below. 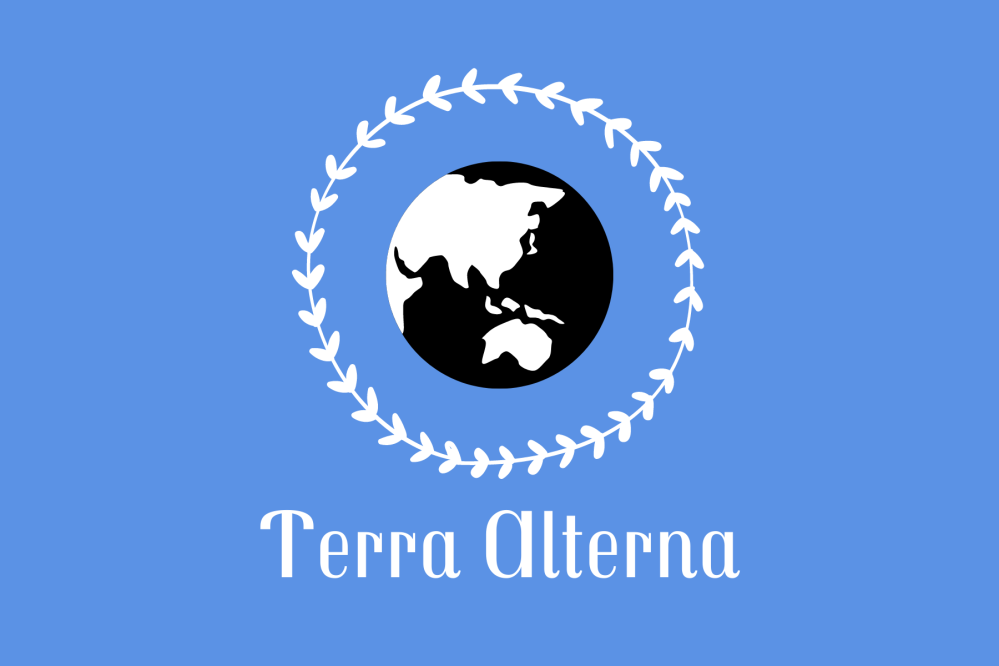 Eyeke is also known as "Terra Alterna" due to being the the nearest and closest of all Alien Worlds to planet Earth. The blue of the flag represents Eyeke's beautiful waters, as well as the calm nature of the Monastic Greys which inhabit the planet. Citizens of Eyeke are proud of their home, which often reminds them of the land they left in order to seek a better future in the Federation system.

The Flag of Kavian 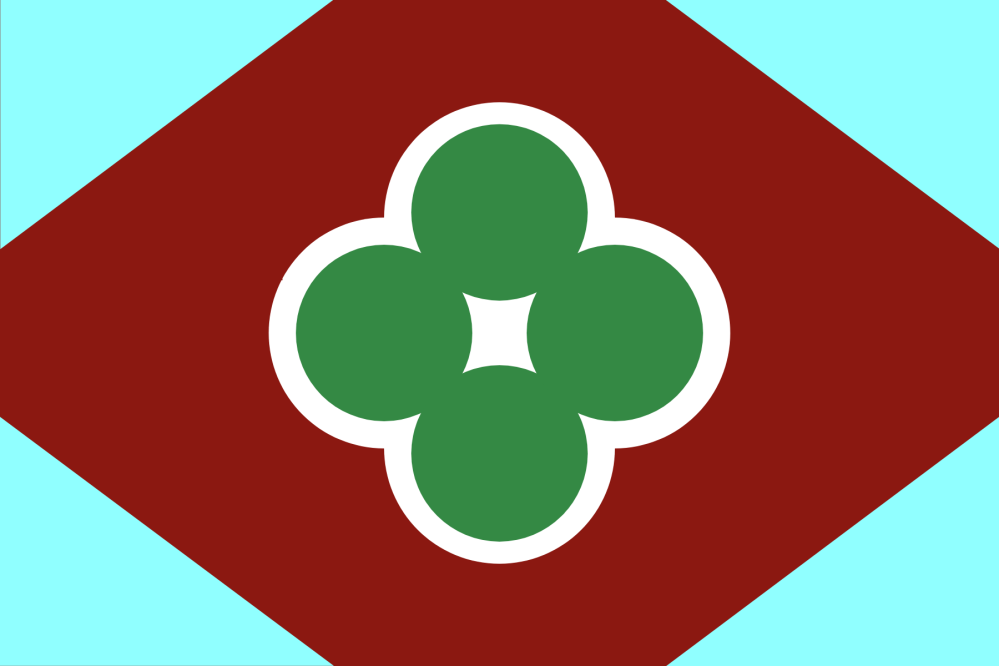 Known for its rocky and icy climate, Kavian still remains a wealthy planet with beautiful, biodiverse areas where Federation citizens congregate. The center circles of this Flag represent the planet's terraformed, biodiverse areas, as well as the Reptilioid villages which dot the landscape. The blue and red hues of the flag highlight the planet's jagged rocks and icy poles. Citizens of Kavian are proud to wave this flag, which demonstrates their resilience in the harsh climate of this planet.

The Flag of Magor 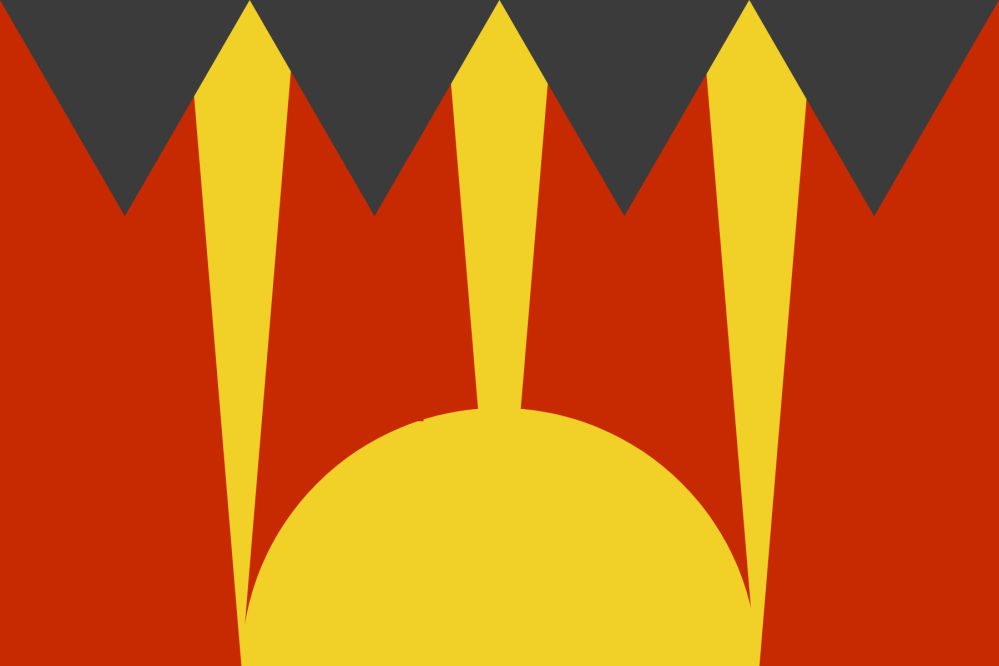 Magor: The harsh planet with an imposing flag

Magor is home to the harshest climate in the entire Federation System. Initially intended as a prison colony, the Federation opened Magor to all miners upon the discovery of large pockets of Trilium. While there are no permanent settlements on Magor, many federation miners consider themselves citizens of this hostile planet. This flag represents the harsh environment, notably the smoke and volcanoes which engulf the planet. In addition, the yellow semi-circle and beams are a reference to the planet's anomaly of a desert, which is said to hold many ancient secrets.

The Flag of Naron 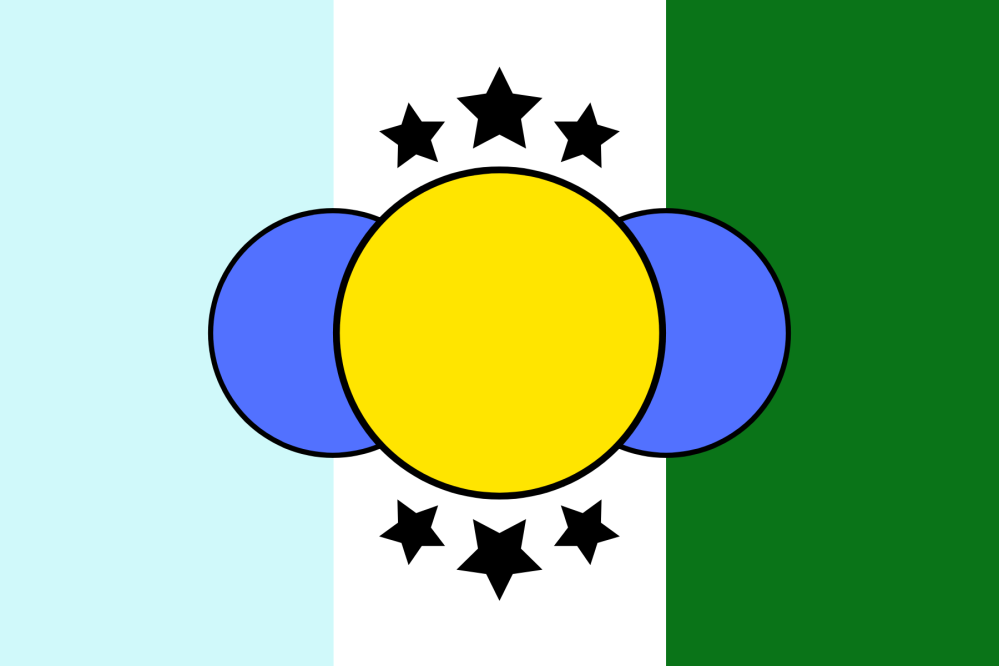 Naron: home to a sacred island which lies amongst the striped landscape

Known for its distinctive bands of environments, Naron is home to a significant number of Federation citizens who are attracted by the diversity in mining possibilities. The blue, white, and green stripes highlight the planets trilium wealth, from its icy caps to grassy plains. This flag also accentuates the two massive central lakes which exist on Naron, and more importantly the golden circle is a reference to the island in Lake Nyari, which is held sacred by many races in the Federation System, and is also a symbol of pride for all Naronians. Many Naronians would say that this flag emphasizes their planet's status as "The Gem of the Federation."

The Flag of Neri 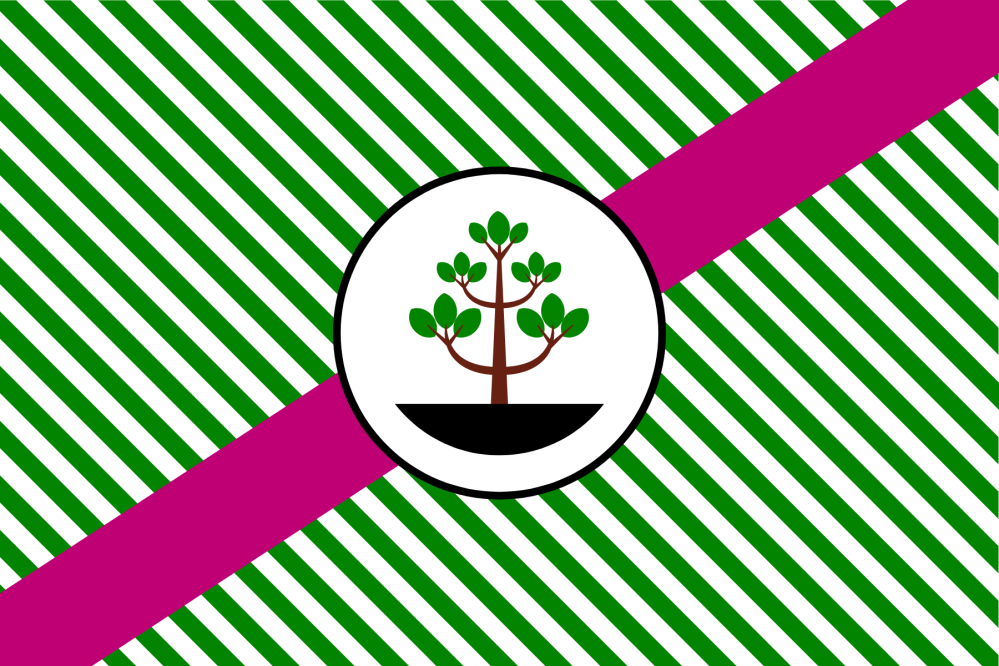 Neri: A land of wealth and diversity

Neri is a lush planet known for its extensive forest cover, striped biomes, and the wealth of its citizens. The red-violet stripe of this flag is an ode to the numerous methane swamplands where some of the Federation's first miners struck Trilium. Nerites are proud to wave this elegant flag, and the planet's methane swamp tree is featured prominently at the center, as a symbol of citizen's wealth and status in the Federation System. The Flag of Neri is seen by all within the Federation as an indicator of diversity and strength.

The Flag of Veles 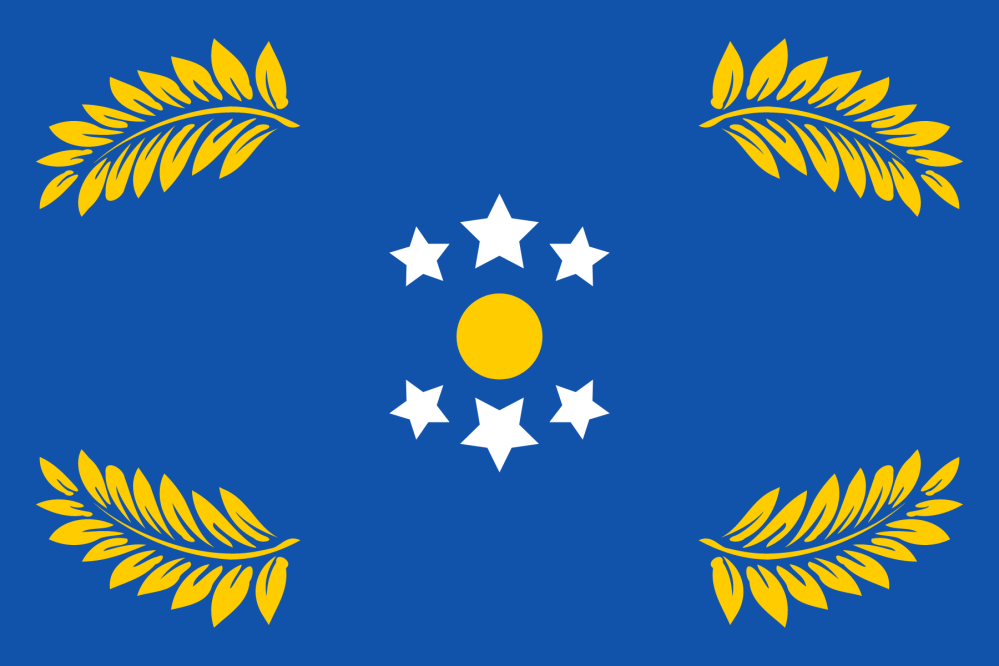 Veles: beautiful oceanscapes across the planet

Often considered the most beautiful planet in the Federation, Veles' is often a popular destination for travelers of all races from all over the system. The flag's deep blue hue represents the depth and beauty of its oceans, and the golden ferns which border the flag symbolize the unique exoflora for which the planet is famous. A sole golden circle surrounded by stars is the centerpiece of this flag, and is a refence to the various islands which dot the planet, as well as Vele's place as a jewel amongst the stars. Citizens of Veles are known to incorporate the colors of their flag as well as the golden ferns into a great deal of their clothing.

I hope that you enjoyed checking out this collection, and thank you for reading! To thank all of you who have been supporting Sir Snorfkin and my updates from the Snorfkingdom, I would like to show you all some appreciation! To make this giveaway a bit interesting, it will be based on collection milestones. What does that mean exactly?

For each Plantary Flag NFT, I have reserved Mints 4-13 specifically for the giveaway. For each 100 flags minted (per planet), I will be giving away an additional NFT. So if all 1000 flags sell out per planet, there will be 60 NFTs in total given away!! Alongside this amazing NFT giveaway, I will be giving away 75 TLM from Alien Worlds to multiple lucky winners depending on the total amount of flags sold! For each 1000 flags sold, I will distribute 75 TLM to three additional participants.*

To enter in the giveaway, all you have to do is:

1. Follow Sir Snorfkin on publish0x (If you haven't already registered with publish0x, sign up using Sir Snorfkin's link here
2. Give a thumbs up (and tip if you are feeling generous) to this article
3. Comment below with your Wax Address and tell Sir Snorfkin what your favorite flag is!

Complete all three steps in order to be eligible for this giveaway!

To further share your love of the Snorfkingdom and these flags, you can help the reach of this giveaway by following Sir Snorfkin on twitter and sharing this article with your friends, family, and more, via twitter, whatsapp, telegram, discord, or any other forms of media!**

This giveaway will end on 16:00 UTC on 15th of May, 2021, so be sure to participate before the deadline. Giveaway results and Collector Badge distribution will be undertaken after the ending of the giveaway and inaugural launch.

*In the case that not enough participants take part in the giveaway or not enough flags are sold, TLM will not be distributed, as the NFT giveaway will take precedence.
**This is not a requirement to participate in the giveaway, but is greatly appreciated by Sir Snorfkin and helps spread the word! (Please note, do not spam discord channels with this article, but share with your friends and networks in a responsible manner when letting them know about this giveaway)

In addition to these giveaways, Sir Snorfkin has connected with numerous enthusiastic landowners across the Federation, who will also be doing their own Federation Flags giveaways. In total, there are more than 20 different landowners on various planets who will be giving away planetary flags as they see fit, so be sure to check out their communities for more information! Most landowners' communities are easily accessible via the Alien Worlds Discord channel. The current list of collaborating landowners are as follows:

A major thanks goes out to all participating landowners for making this launch successful!

In order to be able to more giveaways as well as create reviews and project spotlights for the Snorfkingdom, I greatly appreciate all of your support! Purchasing any of these flags via wax.atomichub.io will go towards helping Sir Snorfkin create more exciting content, and also to achieve some upcoming objectives: