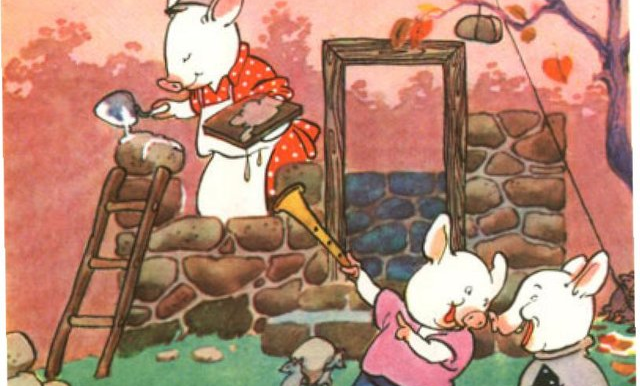 However, what most people don’t know is how they came to such decisions. Some people might even think that the third pig was smarter or something. Nuh. I know this from a very good source. In a sense, the first pig was even the most responsible, more perception of public opinion. He built his bungalow first and threw the house warming party. He invited his brothers, other relatives and all specialists related to construction he knew: interior designer, upholsterer, landscapist, architect, and structural engineer.

Most of the specialists liked the bungalow. They only gave some minimum suggestions, which in their opinion would bring the bungalow in the state of absolute perfection. The interior designer suggested rearranging furniture, to paint the inside walls in brighter colors, to hang some abstract paintings, to install high-quality parquet and hang stylish drapes. The upholsterer suggested resurfacing the sofas and chairs. The landscapist advised purchasing the decorative plans and a fountain to promote meditation. The architect wanted to make bigger windows and cut the skylight in the ceiling.

Only the structural engineer turned out to be a party pooper.

“What are you guys talking about? Why are you talking about parquet if the house doesn’t have a proper foundation? Look at those walls. There’s hardly any structural rigidity. You might be able to hang the picture on such walls, but it won’t withstand even the moderate wind. Forget the wind it’ll probably collapse under its own weight.”

The other specialists only shrugged. “Someone here doesn’t want to impose his censorship on freedom of expression! Construction is just a matter of perception, interpretation, of an artistic perspective. Don’t listen to his negative criticism. Just ignore it.”

And that’s what the first pig did. He rearranged furniture, installed expensive parquet, hanged abstract paintings, and planted exotic plants and blocked the unconstructive criticism.

The second pig, however, was a little more careful. Surely, the appearance was just as important to him as to his brother. But his lot was closer to the ocean and, sometimes, even during the summer, he experienced gusts of wind. So, he picked twigs as the main construction material. Twigs were more expensive and he could only devote a part of his budget to decorations that his brother did, the circumstance that was immediately noticed by the experts.

“Not bad,” the interior decorator squinted, “but this house is too dark. You need to bring in more bright colors, more paintings more flair, more light more spirit.”

“Your furniture is passable,” the upholsterer rolled his lip and shook his head, “but the material is too cheap, not to modern standards.”

“It’s ok, but what about the ikebana?” the landscapist added shaking his head with some dissatisfaction. “There is no ikebana.” He shook his head with conviction.

Unlike his brothers, the third pig was a close friend of the structural engineer. “Listen, buddy, the engineer once put his hand on the third pig’s shoulder, “it’s not that I don’t give a crap about your brothers, but if they don’t listen to me, then what can I do? But with you…man, listen. I am not against painting in bright colors, stylish parquet, and ikebana. But the first and foremost the house has to be built in a way that it won’t collapse, under its own weight, so it can withstand wind and rain and snow and for God sakes, let’s remember who we are in the food chain. We need a firkin fortress to survive!”

And so the third pig built his house from rocks, with the solid 24 inches foundation standing on the concrete slab, with columns of reinforced concrete and structural beams of steel.

And so when he finished his entire construction budget was depleted. He only could afford some used furniture from the second-hand store and only very simple off-white paint.

“What a horrible taste,” the interior decorator quietly whispered to the upholsterer, “all these bare walls and the concrete floor, how beastly.”

“Yes, this is unthinkable,” he shook his head in disapproval. “No curtains, no drapes, no carpeting. Just bare walls. Your advice, my friend fell to a dead ear. You were indeed ‘casting pearls before swine’, pun intended,” the upholsterer whispered back and continued out loud “My dear,” he addressed the third pig “I’ll be feeling cold within these walls, and I don’t mean in-su-lation.”

The third little pig, however, stood in the middle of the guest room crossing his hands in Napoleon like manner.

“It’s ok,” he sneered quietly to himself, “We’ll see who’s gonna have the last laugh when the Big Bad Wolf will start huffing and puffing.”