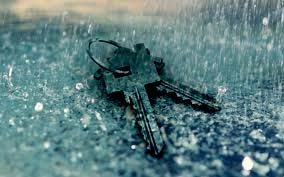 "Mom, how did you and dad meet?" A girl was rocking on the chair, chewing her hamburger.

"How did we meet?" reiterated the mother putting a salad into her husband’s plate. A glimpse of a dreamy smile made its way into her face.

She remembered that evening how Bill, wet like Mississippi, knocked into her door and asked her permission to call a locksmith because he locked himself out. Silly man, he couldn’t come up with anything better. She forgave him this innocent lie. She knew better. She remembered how many times he passed by her apartment frown and sad, (she picked at him behind the curtain) and even though he didn’t turn his head in her direction, she knew he was thinking about her. Oh, girls always know this stuff. She understood he was just too shy to invite her out. At first, she even enjoyed tormenting him a little. It was a pleasure to notice how he moved his eyes away when they met.

After a while, though it started to irritate her. He was so reserved, so restrained from showing his emotions. Apparently, the thought of achieving her was so ephemeral, so impossible in his mind, that he was afraid to make any decisive move. Even when she gave him some definite signs of affinity, he was hesitant. When they meet he was just saying "hi," and giving her aloof and hopeless smile.

So that evening, when he finally came in all wet from the rain, she decided to take the matter in her own hands. She requested him to take a shower and handed him some dry clothes. When he undressed obediently she paid attention that he had wide shoulders and strong hands. When he came out of the shower, he looked so funny and cute in her sweatshirt and pants. She brought some brandy and they drank and talk, talk and drank. And then when she saw how difficult it was for him to step over the line … the smile on her face got wider and dreamier…then...she kissed him.

She shook off her memory and said.

"We lived in the same condominium complex with your dad, pumpkin. Once he locked himself out, he forgot his key, you understand?"

"Mmmmm." Said the little girl knocking her head. Her mouth was full of food. "…so he came to me to call the locksmith."

"Honey, do you remember that key?" she said touched her husband by the shoulder.

"Of course, darling” he answered, chewing the salad. “A little too much salt, I would say…"

Yep, he remembered. That night six years ago still stood up in his memory as if it happened yesterday. This night he finally was able to get a hold of Natalie.

"Nothing." her tone of voice was calm and measured.

"Well, you’re avoiding me, not answering my phone calls." She did not respond, "Is it something I did?"

"No it’s not you, it’s me." At this point, Bill knew that everything was over.

"Did you meet someone else?"

"Yes, I did" her voice still was calm like cucumber.

"What are you in love or something?"

"And I thought you loved me" he grinned.

"We could still be friends." She suggested.

"No, a friend is what you failed to be in the first place. Good-by!" He squeezed the off button, fell back into his chair and sat motionless for several minutes. Then he got up and went out slamming the door. It was raining, but he didn’t care. He walked and walked hitting the stones with his boot whenever it got on the way.

He was all wet when he dragged himself back. "Where is the damn key? I must have forgotten it. Shoot!" Bill wanted to knock the door out and even gave it two unsuccessful tries, but he felt so weak. Leaning on his door he noticed a light in the neighbor’s window. She was a lovely girl and seemed so friendly. Bill knocked on her door.

"Oh my god, Bill you are so wet. What happened?"

"I am sorry... I locked myself out. Can I please use your phone to call the locksmith?"

"What locksmith, it’s the night time. You’ll do it tomorrow. Now you should take a shower. I’ll give you some dry clothes."

He took a shower and put her clothes on, from which his hands and feet stuck out. "You look so funny" she laughed. "You’re still cold" she concluded touching his hand. "Sit down I’ll make you something hot."

She went to the bar, pulled a bottle of brandy and poured some for him and a little bit for her (for courage) and sat by him on the couch.

After she kissed him Bill felt very sleepy. He was exhausted.