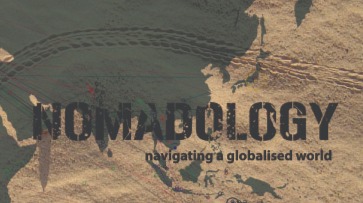 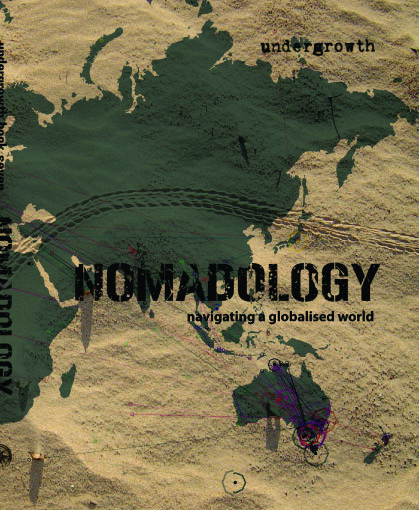 Came to recently re-read Deleuze & Guattari's essay (part of the "Thousand Plateaus" tome) "Nomadology: The War Machine" -- a work that can't be quite pinned down, but as in the spirit of D&G having quite the trans-disciplinary scope of breadth, passing from anthropology to military strategy to ethnography, specific literary references, etc. It essentially undertakes upon conceptualizing what it calls the "war machine" as a force/pull that lies outside of and in opposition to the State apparatus (and as a work it has influenced the IDF, for example). Here's some citations:

As for the war machine in itself, it seems to be irreducible to the State apparatus, to be outside its sovereignty and prior to its law: it comes from elsewhere. Indra, the warrior god, is in opposition to Varuna no less than to Mitral. He can no more be reduced to one or the other than he can constitute a third of their kind. Rather, he is like a pure and immeasurable multiplicity, the pack, an irruption of the ephemeral and the power of metamorphosis. He unties the bond just as he betrays the pact. He brings a furor to bear against sovereignty, a celerity against gravity, secrecy against the public, a power (puissance) against sovereignty, a machine against the apparatus.

The model is a vortical one; it operates in an open space throughout which things-flows are distributed, rather than plotting out a closed space for linear and solid things. It is the difference between a smooth (vectorial, projective, or topological) space and a striated (metric) space: in the first case “space is occupied without being counted,” and in the second case “space is counted in order to be occupied.”

Finally, the model is problematic, rather than theorematic: figures are considered only from the viewpoint of the affections that befall them- sections, ablations, adjunctions, projections. One does not go by specific differences from a genus to its species, or by deduction from a stable essence to the properties deriving from it, but rather from a problem to the accidents that condition and resolve it. This involves all kinds of deformations, transmutations, passages to the limit, operations in which each figure designates an “event” much more than an essence; the square no longer exists independently of a quadrature, the cube of a cubature the straight line of a rectification. Whereas the theorem belongs to the rational order, the problem is affective and is inseparable from the metamorphoses, generations, and creations within science itself. Despite what Gabriel Marcel may say, the problem is not an “obstacle”; it is the surpassing of the obstacle, a projection, in other words, a war machine. All of this movement is what royal science is striving to limit when it reduces as much as possible the range of the “problem-element” and subordinates it to the “theorem-element.”

It would seem that the war machine is projected into an abstract knowledge formally different from the one that doubles the State apparatus. It would seem that a whole nomad science develops eccentrically, one that is very different from the royal or imperial sciences. Furthermore, this nomad science is continually “barred,” inhibited or banned by the demands and conditions of State science. Archimedes, vanquished by the Roman State, becomes a symbol.The fact is that the two kinds of science have different modes of formalization, and State science continually imposes its form of sovereignty on the inventions of nomad science. State science retains of nomad science only what it can appropriate; it turns the rest into a set of strictly limited formulas without any real scientific status, or else simply represses and bans it.

In Husserl (and also in Kant, though in the opposite direction: roundness as the “schema” of the circle), we find a very accurate appreciation of the irreducibility of nomad science, but simultaneously the concern of a man of the State, or one who sides with the State, to maintain a legislative and constituent primacy for royal science. Whenever this primacy is taken for granted, nomad science is portrayed as a prescientific or parascientific or subscientific agency.

And most important, it becomes impossible to understand the relations between science and technology, science and practice, because nomad science is not a simple technology or practice, but a scientific field in which the problem of these relations is brought out and resolved in an entirely different way than from the point of view of royal science. The State is perpetually producing and reproducing ideal circles, but a war machine is necessary to make something round.

Here, it is not exactly a question of extracting constants from variables but of placing the variables themselves in a state of continuous variation. If there are still equations, they are adequations, inequations, differential equations irreducible to the algebraic form and inseparable from a sensible intuition of variation. They seize or determine singularities in the matter, instead of constituting a general form. They effect individuations through events, not through the “object” as a compound of matter and form; vague essences are nothing other than haecceities.

So, occurred to me along such similar lines the kind of horizons/possibilities distributed peer-to-peer systems and protocols open up in making possible the articulation/enunciation of precisely such "nomadic" war machines. Also from the essay:

Let us take a limited example and compare the war machine and the State apparatus in the context of the theory of games. Let us take chess and Go, from the standpoint of the game pieces, the relations between the pieces and the space involved. Chess is a game of State, or of the court: the emperor of China played it. Chess pieces are coded; they have an internal nature and intrinsic properties from which their movements, situations, and confrontations derive. They have qualities; a knight remains a knight, a pawn a pawn, a bishop a bishop. Each is like a subject of the statement endowed with a relative power, and these relative powers combine in a subject of enunciation, that is, the chess player or the game’s form of interiority. Go pieces, in contrast, are pellets, disks, simple arithmetic units, and have only an anonymous, collective, or third-person function. “It” makes a move. “It” could be a man, a woman, a louse, an elephant. Go pieces are elements of a nonsubjectified machine assemblage with no intrinsic properties, only situational ones. Thus the relations are very different in the two cases. Within their milieu of interiority, chess pieces entertain biunivocal relations with one another, and with the adversary’s pieces: their functioning is structural. On the other hand, a Go piece has only a milieu of exteriority, or extrinsic relations with nebulas or constellations, according to which it fulfills functions of insertion or situation, such as bordering, encircling, shattering. All by itself, a Go piece can destroy an entire constellation synchronically; a chess piece cannot (or can do so diachronically only). Chess is indeed a war, but an institutionalized, regulated, coded war, with a front, a rear, battles. But what is proper to Go is war without battle lines, with neither confrontation nor retreat, without battles even: pure strategy, whereas chess is a semiology. Finally, the space is not at all the same: in chess, it is a question of arranging a closed space for oneself, thus of going from one point to another, of occupying the maximum number of squares with the minimum number of pieces. In Go, it is a question of arraying oneself in an open space, of holding space, of maintaining the possibility of springing up at any point: the movement is not from one point to another, but becomes perpetual, without aim or destination, without departure or arrival. The “smooth” space of Go, as against the “striated” space of chess. The nomas of Go against the State of chess, nomas against polis. The difference is that chess codes and decodes space, whereas Go proceeds altogether differently, territorializing or deterritorializing it.

And I've always suspected Bitcoin, underneath all the strange ideas and delusions surrounding it, to have been conceived precisely as such an ad hoc war machine assemblage/construction.

Then I noticed some paper/publication by Joseph Tainter that I hadn't yet read, on the topics of complexity, problem-solving and sustainability (Tainter's area of expertise, collapses of complex societies) and, well, here's a specific paragraph that captures the gist of it:

Complexity is a fundamental problem-solving tool that in its early phases, complexity can generate positive feedback and increasing returns. Confronted with challenges, we often respond by strategies such as developing more complex technologies, adding more elements to an institution (specialists, bureaucratic levels, controls, etc.), increasing organization or regulation of transactions, or gathering and processing more information. Each such action represents increasing complexity. Their effectiveness comes in part because changes in these dimensions can be enacted rapidly. While humans may be complexity averse when we personally bear the cost, our problem-solving institutions can be powerful complexity generators. All that is needed for growth of complexity is a problem that requires it. Since problems always arise, complexity seems to grow inexorably.

And it seems clear to me that our new digital infrastructures will be the foundations on which we'll set up the strategies and mechanisms for managing the levels of organizational complexity necessary for avoiding/preventing that kind of societal collapse of rapid simplification. Since its precisely such a communications infrastructure that makes it possible to even hack it.

As these Neubauten lyrics went, "if the future isn't bright, at least it's colorful."