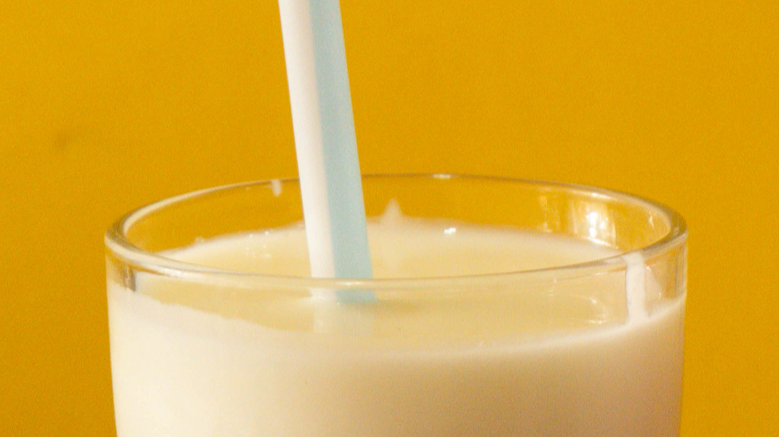 Many of you are aware that I am always looking for ways to leverage my portfolio to the max and I was randomly thinking to myself in the small hours of the night in that twilight between going to bed and falling asleep when I came up with another possibility.

After coming up with Suckling the Pig I considered calling this Killing the Pig as it is based on similar principles, but I thought that might be a bit brutal. So instead I have come up with the alternative of Slurping Your Milkshake.

What a strange title I hear you say!

Let me explain. When I was a child and drinking a milkshake through a straw I was always determined to get every last drop out of it and would noisily suck up a lot of air as I took the last residue of the shake out of the cup.

Coming back to Suckling the Pig I was pondering whether similar principles could be applied to my Crypto to a greater degree and I came up with a new model, which I verified after I got up with some spreadsheet calculations that I have presented later in the post. While similar to Suckling the Pig, it goes much further and is done incrementally and leverages in small steady steps as opposed to waiting for a big swing.

Before I go any further it is important to stress that this is experimental and unlike the other approaches I have described in previous posts it is largely untested, although the theoretical model is sound. Based on what I wrote yesterday about cashing out there is a presumption that DAI is being used as a holding / cash out account because of its stability.

So how does it work?

The numbers presented below are arbitrary and only serve the example. Of course you could invest more. Fees will be relatively low, but have not been counted, so the investor must always bear this in mind. Returns may not be exactly as presented. Also depending on market movement you may decide to take more rather than the uniform amount I have suggested and then illustrated in the table below.

… enough preamble get to the point…

Imagine you have £100 invested in a specific Crypto.

Wait until it is worth £102 and take the £2 to your DAI wallet. In doing so you have reduced the amount of Crypto held, but released some capital.

Now the slightly complicated stage. It would be unreasonable to expect your currency to hold a residual value of £100 as per the original value, but if you reduce its arbitrary value by £2 then you have only made a withdrawal. So with this in mind do the following

Make the new arbitrary value of your held Crypto £99 and once again wait for the market to value your Crypto at £101. Once more take £2 to your DAI wallet and adjust your wallet’s arbitrary value to £98.

So now you have a wallet with an arbitrary value of £98 and a stable £4 in your DAI holdings, a combined value of £102 or an increase of 2%. Of course this would have been achieved by just cashing out first time (although fees would have been higher). The key is to keep going and keep drawing funds to your DAI wallet on an ever decreasing Crypto wallet value (killing the pig or slurping your milkshake). It really begins to make an impact when the cycle has been repeated many times. In the example outlined below I have repeated 50 times with a corresponding cycling down of my wallet value. I stopped at 50 cycles because when waiting for a move of 4% it becomes more difficult.

Once the 50 cycles have been completed reimburse and rebuild your Crypto Wallet from you DAI holdings while retaining the profit and start the process again.

Let’s have a look at the figures: 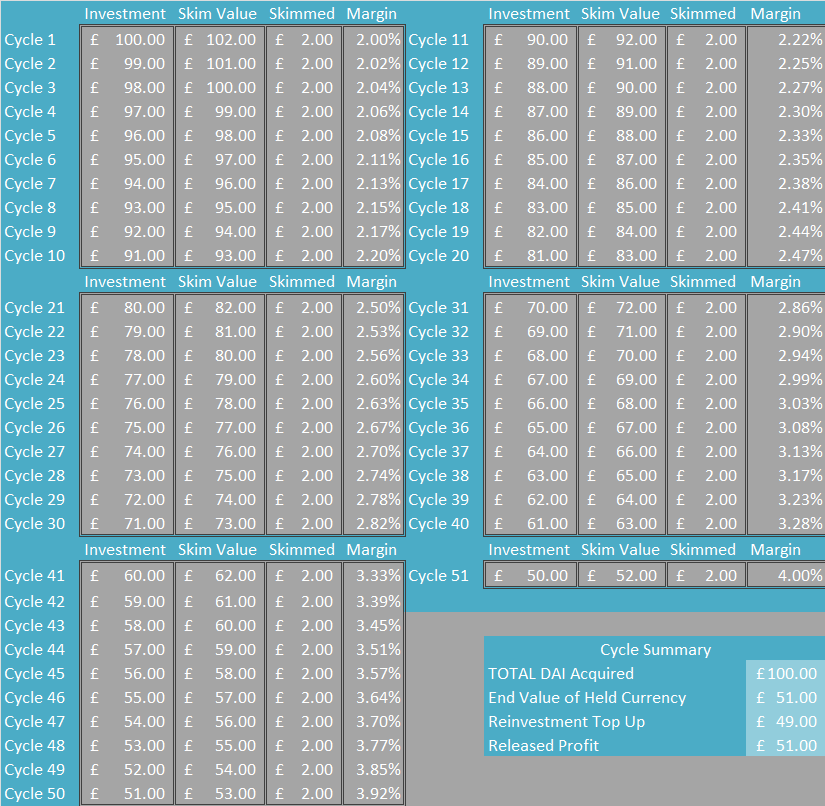 Remember I decided to stop after Cycle 50 as expecting a 4% swing (see Cycle 51 presented for information purposes) might be too ambitious. Of course you can stop sooner or later which will affect the end result, as will the amounts drawn during each cycle). However based on this model and stopping after Cycle 50 means that my held Crypto has been reduced to an arbitrary monetary value of £51.00, but in doing so I have taken monetary value of £100 (interestingly the original wallet value) into my DAI wallet; thus meaning this element of my portfolio is now worth £151 (an increase of 51%).

50 cycles sounds like quite a lot, but in the right market conditions it should be possible to make several trades in one day or a larger one that has the same effect as several cycles. Conversely you may need to HODL for a while until market conditions are suitable. The purpose of this example is to provide in a uniform way a model of how it could work.

At the end of the process reimburse the Investment Crypto from your DAI wallet with £49 to take it back up to £100 and sit back with the £51 gained in DAI and start the process again.

At this stage it is a theoretical model, but the numbers add up. Watch this space and I will let you know how it goes or why not have a go yourself and let me know how you got on?