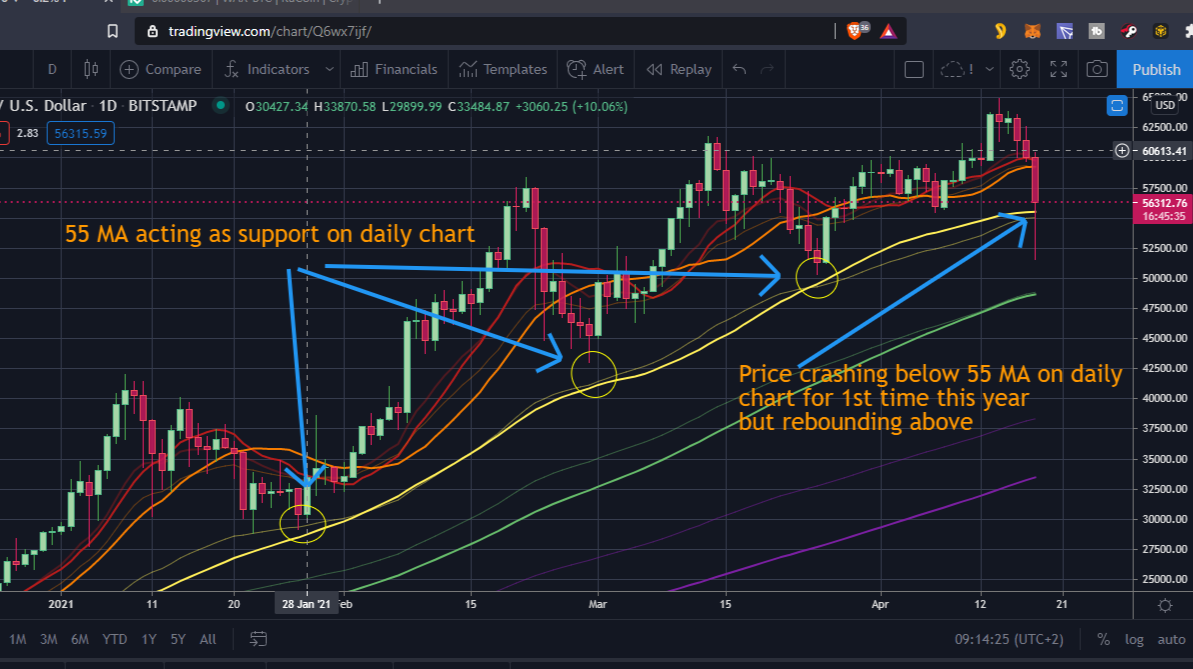 Just 4 hours ago as I write this Bitcoin crashed 12% in one hour but traders were quick to buy the dip and price rebounded half of that loss within minutes. Nevertheless, according to data $9.6 billion worth of crypto was liquidated overall. Price broke the $60k support, which had been previous resistance for some weeks and plummeted to as low as $51.5k. It only stayed there for about 15 minutes before rebounding as traders saw an opportunity to buy some discounted cryptocurrency.

Perhaps the timing is significant as Sundays appear to have less volume of traders and perhaps the price was more vulnerable to manipulation by whales. This is just my speculation of course. The reality of today’s trading style is that it’s mostly futures contracts or leveraged trading of 10x or 50x on certain exchanges, compared to simple spot trading. And these leveraged markets seem to be the ones that really get affected and which move price more than the rest. As a result all those long positions got liquidated, which acts as a cascading waterfall effect on price, which can collapse quite quickly under such liquidations.

Since rebounding from the dump, price has now regained half of the loss and appears to be sitting very stable at $55k region for the past hour. I would like to believe that we will resume the uptrend from here, with buyers scooping up cheaper bitcoin. However we are still in uncertain territory so nothing is certain just now. The dump pulled most of the altcoins down with it, as they also lost value.

It appears that bitcoin still controls the overall market sentiment, and the alts simply follow suit. There are a few anomalies of course. Doge is the biggest such anomaly as it makes massive gains recently. Was it another pump by retail social media warriors, much like GameStop stock market pump a month ago? All it takes is a large band of connected social media activists on Whatsapp or Reddit to collectively orchestrate a buy or sell on mass, to move the price significantly.

Manipulation goes on all the time by large whale investors in most sectors, especially metals where price is suppressed, and also in stocks. Now the little guy or small retail traders are finding their power in numbers and utilizing modern social media connectivity to also push back against institutions and elite Wall St investors by pumping stock prices and now also Doge coin by the looks of it. Well done guys, great effort, much wow.

As for the altcoins, they usually fall harder when bitcoin dumps and we see that with XRP and LTC now in this current correction. The SEC is still dealing with the Ripple case in court but that hasn’t stopped the price from climbing rapidly recently. Yet the dump hit them harder than many others. So sentiment is easily manipulated too right now in what appears to be a fragile time for XRP.

The much hoped for bitcoin price pump on the Coinbase IPO news has not materialized and instead we have just had this significant dump, although a 20% correction on average is to be considered not unusual for bitcoin. Although price has broken down way below the 200 MA on the 4 hour chart, the old support at $50k has not been breached. Price actually rebounded after the initial dump, right back up to exactly the 200 MA on the 4 hour chart around $58k but was rejected and now sits above $56k as I write this.

However, we do look bearish right now, especially on the daily, where price has broken the 50 MA significantly for the first time since October last year, when price was around $12k. This is massive. But the good news is that despite price crashing below the 50 MA on the daily, the immediate rebound has actually put it right back just at the 50 MA around $56k currently. This is a huge bullish signal because price has only dipped to the 50 MA on the daily on regular occasions, thereafter pumping once more in the bull market trend over the past six months or so.

Today’s long wick on the daily candle looks ominous though as a first to dip so far below the 50 MA for this year. Nevertheless, the 100 MA on the daily is still way below at around $48.7k. If price holds at its current value, I would say we are still looking bullish on the daily. It is however, still uncertain territory right now, as the 4 hour chart looks bearish based on the rejection at the 200 MA resistance.