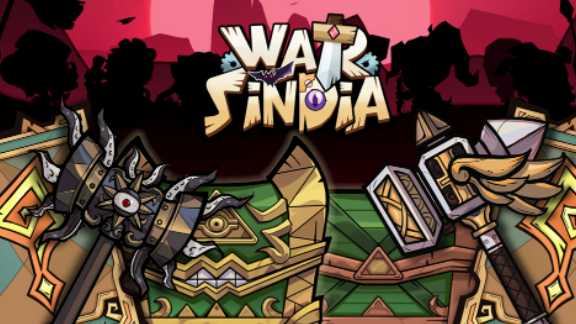 On the Evaluation of “EsportsFi”: WarSindia, which is an RTS chain game, is launching a whitelist event

RTS (Real-Time strategy) with MMO features(massively multiplayer online game) is always an upsurge for the market. Generally, these games had some characteristics in common, which are deeply driven by their strategy, and enriched gaming experiences, such as World of Warcraft, LOL, and Dota. With years of development, they are bonded with a large group of customers, the customer is king, further promoting the depth of the market, and forming a complete gaming ecosystem.

Currently, WarSandia is integrating RTS into the blockchain game, which is progressing toward another upsurge for the market. A blockchain game is usually built on a chain that is decentralized. Compared to the traditional one, it has a very distinct character. Traditionally, players stored their game assets, props in the server, and blockchain game usually in the form of NFT, and permanently stored on the chain and are tradable at any time. As such, the tradability of these games allows the players to earn through playing. Further than that, most blockchain games have P2E features, leading to more and more players being enthusiastically excited about the game, and even making a fair value of earnings throughout the games.

Similarly, some representatives of blockchain games such as Axie Infinity and The Sandbox are progressively challenging the market of traditional games. There will be a paradigm shift in traditional games, gradually moving toward blockchain games. And WarSindia is one of the rare blockchain games featuring both RTS and MMO. Hopefully, it will produce a high-quality strategic game through fulfilling gaming experiences. In addition, WarSindia also intends to develop its ecology in the field of esports. In coping with the integration of Esports + DeFi + GameFi, WarSindia is well-known for its game ecology, and the players had great hopes for WarSindia while releasing the Alpha Testing version to the players as soon as possible.

What kind of game is WarSindia?

WarSindia is a strategic RTS game. The players will command the army and build territorial defences in strategic allocation of Lands, and Heros. Defending their own territory and fighting against others of the Sindia continent. It usually takes 2 to 5 minutes per game. And the victory or defeat depends on the destruction of the key building in one game.

Across the game, WarSindia has many mechanics that enriched the users’ excitement, such as heroes, land and buildings, which require players to arrange strategies and build reasonable formations to achieve both offence and defence.

Moreover, WarSindia pioneered the custom editor for blockchain games, which allows players to customize the game’s elements such as maps, and generate a tradable NFT for other players. And that further enrich the game through the player’s creativity. The map editor is also an embodiment of user asset creation, value UGA (User Generated Assets), and a revenue pipeline for such creators. And those significant ones will become the unofficial game guides in integrating WarSindia’s culture.

Players can build the defensive building on the four lands mentioned above to fight and defend the territorial borders. The building consisted of towers and barracks. The towers included arrow towers, laser towers, magic towers, shield towers, and scout towers. And these towers have unique properties and give the players different defence abilities. In addition, players also need to choose between three types of barracks (Fighters, Rangers, Defenders). Three barracks will send different troops during the game, and once the barracks are destroyed, they will not be recovered for one entire game. As a result, it is critical to choose which towers and barracks are the best matches for the map, and optimising the strategic experiences for the players.

Besides the land and defence buildings, the players need to choose the different attributes of heroes to deploy, Tank, Attacker, Supporter, conqueror. Currently, there are 6 heroes in total (3 from The Revolutionary Army, and 3 from the Crusader Army). In each game, the player needs to select 3 out of 6 hero deployments and deploy a key commander to lead the game. And yet, heroes can be further improved, such as upgrading runes, lighting up the skill tree, or equipping heroes with one of the most powerful NFT weapons or skins. These attributes may be the key factors to turning the game around.

Army Box in the Whitelist Campaign is making the player enthusiastic

Initially, NFT assets such as heroes and weapons can only be obtained from the pre-sales of the weapon box, by opening up the Army Box. At the later stage of more liquidity, these assets can be purchased on the NFT trading market.

According to WarSindia’s official announcements, it is about to launch the pre-sale Army Box (Random blind box), and that raised the awareness of lots of players and attracted a large number of customers’ attention in pre-sale.

As such, the “Army Box” will contain weapons with specific features, attributes, and rare NFT items such as hero fragments, and can bring unexpected effects to players in the game. However, the number of pre-sales “Army Box” is limited, only 400,000 total. Among them, there will be 200,000 Premium Army Box and Common Army Box each. Due to the high demand for the game, not everyone can get NFT items and play the game when it is opened. The 12 rare and exclusive Ancient Artifacts cards are hidden in the Premium Army Box, and the 12 unique Amber Hammer are hidden in the Common Army Box.

Many players are super excited about WarSindia’s Whitelist campaign, as they are all expected to take over the game and get the whitelist to advance the pre-sale of Army Box. Meanwhile, the campaign, which already began on March 28, will end on April 11. Although that player may get those items at a later stage in the trading market, the campaign seems to be the most cost-efficient method to get these items.

WarSindia truly values the potential of the Esports industry. In addition to WarSindia’s game model being suitable for the development of the Esports field, Esports can also further attract more professional players, audiences and brand sponsors for WarSindia. It can build an Esports Ecosystem and embrace a more customer base from the traditional game.

At present, WarSindia is also moving towards EsportsFi's vision and making continuous efforts. WarSindia plans to invest 90% of its ecosystem revenue for Esports rewards and marketing.

When the game launches, WarSindia plans to have a continuous Esports tournament, attracting more players to join. With more of the revenue being invested, a completed ecosystem with professionals, live streamers, and sponsors will gradually join the market. Everyone is growing and earning throughout the ecosystem.

On the contrary, WarSindia is expanding its influence by building a variety of merchandise to establish more commercial influences. WarSindia is spreading its game content through all kinds of propaganda such as MV, novels, and anime series.

Currently, WarSindia has hired professional media consultants and is prepared to discuss a strategic partnership with well-known worldwide drama companies like Netflix, SYFY, CW to prepare WarSindia themed anime series. In addition to that, 15 famous novelists from diverse backgrounds are creating related novels for WarSindia. Also, another famous band from Ireland is making an exclusive MV for WarSindia. Undoubtedly, WarSindia is establishing long-term goals and envisioning the whole Ecosystem in progress.

WarSindia is one of the most distinctive blockchain games, which is taking advantage of the P2E feature, strategic in nature, and flexible gaming experiences. Furthermore, for the potential upsurge in the market, growing as an EsportsFi may be the most critical part for WarSindia to stand out from the rest. Being a role model in considering Esports for Blockchain.

Last but not least, actively participating in WarSindia's ongoing campaign, winning the whitelist presale qualification is the most important for now. There is going to be a special giveaway worth 5 thousands Dollars for random lucky participants.

WarSindia is set to become the world's first RTS GameFi platform that provides users with entertaining gameplay combined with profitable systems and opportunities. The game initiates the concept of complete ownership of the in-game assets and induces immersive gameplay that allows users to invade other players in the space. This game is set to reach the heights of extreme gameplays with profitable results.

This Blog will contain all the Press Releases for different projects related to cryptocurrency, blockchain, NFT. If you want to publish a Press Release, Just ping me at TG: @ivysamboh || [email protected]