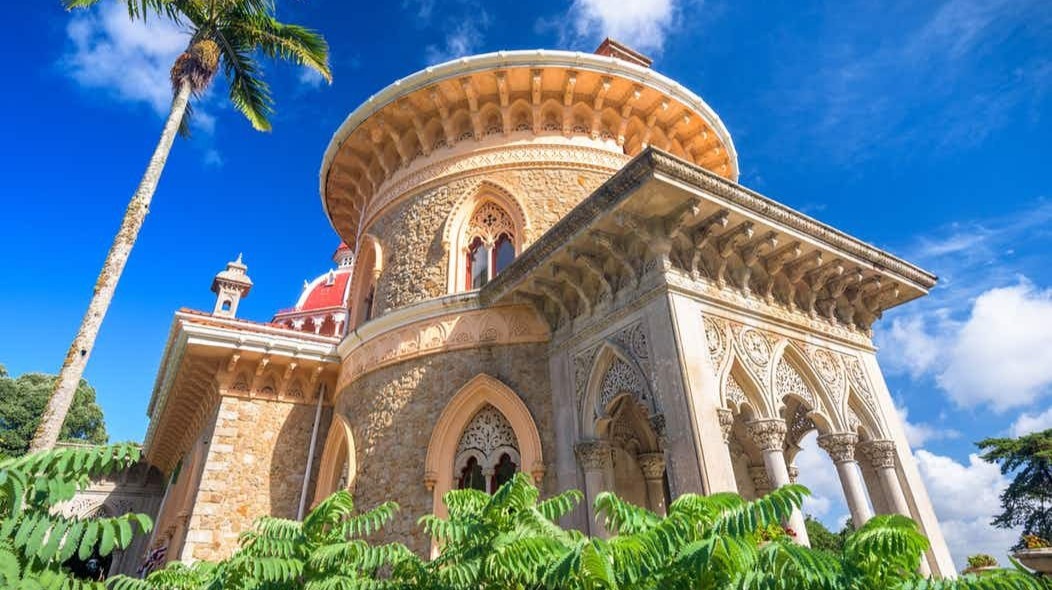 Sintra is one of the places of Portugal classified as World Heritage.
The magical environment that combines the natural landscape with its various monuments contributes much to this.

In the place where today we find the Monserrate Palace, a Mozarabic knight had once lived.
When this knight died, he was buried in this place and was revered with fervor.
Then, during the twelfth century, a sanctuary was built over its tomb.
Four centuries later, Father Gaspar Preto rebuilt a chapel there in honor of Our Lady of Monserrate. In the early eighteenth century, this farmhouse belonged to the 36th Viceroy of the Indies, the noble Caetano de Melo and Casto, continuing to belong to his descendants until the middle of the following century.

In 1790, his granddaughter rented Monserrate farm to the Englishman Gerard Devisme.
At that time there was a castle-like building with two towers, one of which was a keep, and a conical roof.

However, in 1794 Gerard Devisme left for England and sublet the Monserrate Farm to William Beckford, who promotes some building restorations and mainly invests his imagination in the surrounding landscape, giving the place an atmosphere that perfectly combined with the atmosphere romantic that the place itself already had.

When the lease expired, Beckford returned to England and the house eventually dropped out. In 1856, the farm was acquired by Sir Francis Cook, an English business-related millionaire.

Inspired by the ideals of romanticism, these men created magical gardens full of surprises such as clearings, lawns, woods and lush vegetation brought from the most varied places in the world, in a total of more than 1000 wisely conjugated species. As for the building, it was designed in a particularly interesting way, in a neo-Gothic style, combining straight elements with a circular tower and bulbous domes. The Moorish gallery with its pink marble columns has polylobated arches that seem endless to those who watch them. The stone eventually dematerializes into borders and tracery accompanied by the exoticism of the stucco of some artists from the north of the country. The music room has an extravagant dome, combining the white of the stone with the gold of the delicately carved details.

After the works were completed, beautiful and rare works were placed in the Monserrate Palace that would serve as adornments but, unfortunately, are now missing.

As for the hisoric chapel, little remains of it, today it is lost in the middle of the vegetation. In 1870, Sir Francis Cook was awarded the title of Viscount of Montserrat. Already in the twentieth century, his great-grandson, Sir Francis, sold the palace to a private individual. Later, the Portuguese State acquired the farm and, since 1978, the Monserrate Palace has been classified as a Public Interest Building.