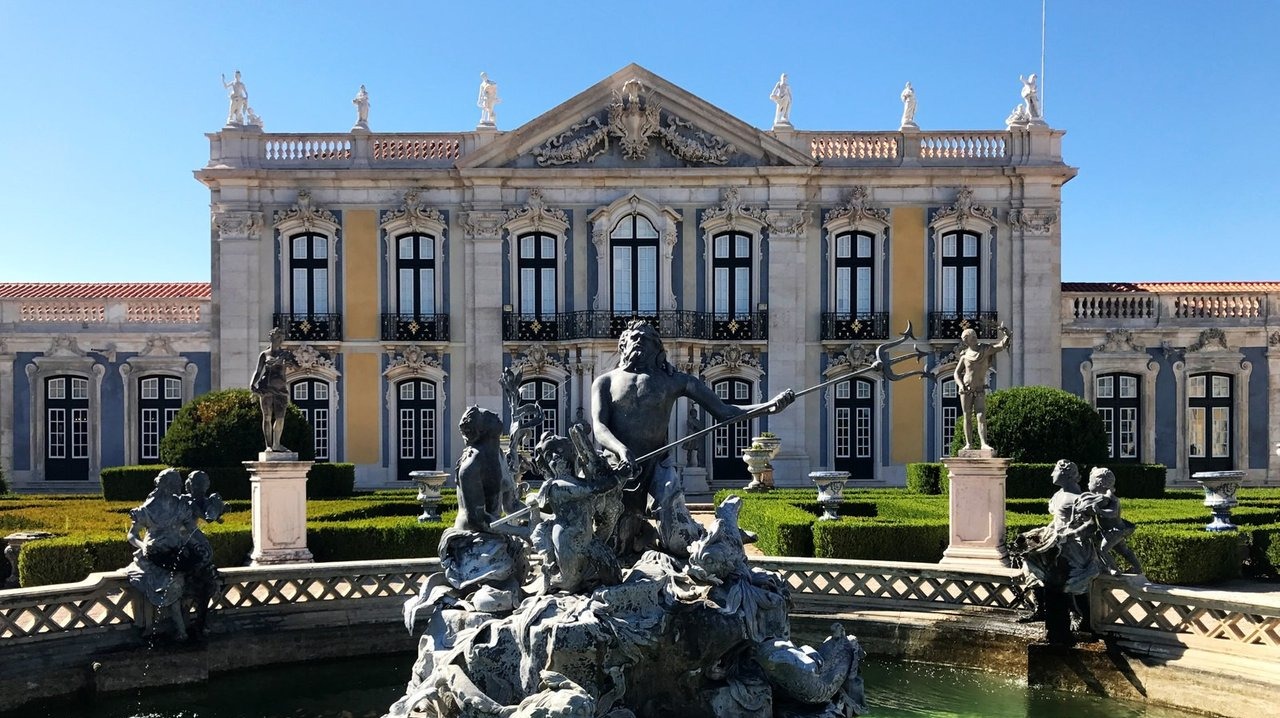 The Queluz Royal Palace, in Sintra, is one of the national monuments that best helps us to understand the intimate experience of the Portuguese court in the eighteenth century, letting us know how the royal power was affirmed at that time.

Both inside and in the gardens, you can see a monumental ensemble with influences ranging from baroque to neoclassical, through the rocaille, with features very similar to those of several French and Italian palaces of that time. The Royal Palace of Queluz was built by D.Pedro III, who was ordered to expand an existing building, giving it a Royal Palace. Thus, D.Pedro III began to devote to Queluz a very special attention that would only end with his death. Until it received its present form, the Palace went through 3 phases of construction:

The first phase, between 1747 and 1758, was under the purview of Mateus Vicente de Oliveira and consisted of the transformation of Paço Velho into Paço Real.

The second phase, between 1760 and 1786, also began with Mateus Vicente de Oliveira, but this would be replaced by the French Jean-Baptiste Robillion. He added to the project the so-called West Wing of the Palace, with the Ambassadors Room and the Robillion Pavilion. During the reign of D.Maria I and D.Pedro III, the Royal Palace of Queluz was used as a Summer Palace, to which the Court ran for the celebrations of St.João and St.Pedro. In addition to the religious festivals, this was where the royal birthdays were celebrated.

The presence of the royal family thus represented a golden age at the level of culture in Queluz, music occupying a central role, and before the Opera House 1778 was built, opera and serenades were played at the Royal Palace of Queluz, mostly inspired by classical mythology. With the death of D.Pedro III, these musical parties began to take place in Lisbon, at the S.Carlos Theater, which was normal for the Royal Family. Even so, the Palace remained a privileged summer residence until the French invasions, when D. João VI decided to go into exile in Brazil.

During the French invasions, the Palace began to be stripped of its silverware and furniture, which were then removed for the purpose of other palaces that served as residence in Lisbon. Still, when General Junot visited the Royal Palace of Queluz in December 1807, he decided that it would become Napoleon's official residence in Portugal.

However, this ambition of Junot would never be realized since the French occupation was brief. Still, the Palace was the target of looting and looting by the invading armies that practically stripped its interior. After returning from Brazil, the royal family would again occupy the Queluz Palace. But the death of D.Pedro IV in the bedroom of D. Quixote would come to be so symbolic that the royal family would leave the Royal Palace of Queluz for good, which would be ceded to the Portuguese State by D.Manuel II, the last king of Portugal.