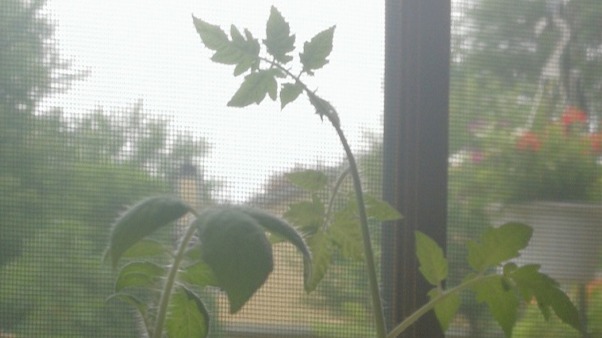 Like many other furloughed suckers and housewives, I've been growing a lot of plants this summer in the hopes of getting really good at gardening. I got so Etsy-happy in June that I ordered at least 1000 more exotic/interesting seeds than I'd be able to grow (not varieties, mind you, just seeds).

A lot of those seeds came from indeterminate tomatoes (meaning they keep growing and producing fruit if you let them), and given that I live in hardiness zone 5b, that was conventionally a really dumb idea...

HOWEVER it ended up being a really good idea because of the way I view myself as an alchemist on a journey of growth and discovery.

So I've got like fortyish plants on my parents' screened-in porch and even my mom the gardener gets pissy about it because it's less than 100 square feet. Regardless, it's prime south-facing, shaded real estate away from the dirty rabbits, so it is clearly meant to be used to grow food. All my stuff is usually shoved in the corners anyway. Regardless, there might be a shitshow when I have to bring them in the sunroom. To be fair though, this overzealous gardener ego took its shape just after a semi-successful attempt at growing three autoflowering cannabis plants in parents' basement with a $20, 45-Watt LED grow light, and said parents were surprisingly okay with that. Because you were intrigued, the total usable yield from those plants weighed a very shitty 10 grams. Had to make the mistakes sometime, though, and I still haven't had to buy any in years. They were naively planted in coco coir at the beginning (and, to my credit, grown organically) before the gardener ego came out of the closet.

Perhaps that experience could be detailed later.

Here is a current photo of one corner of my lab: 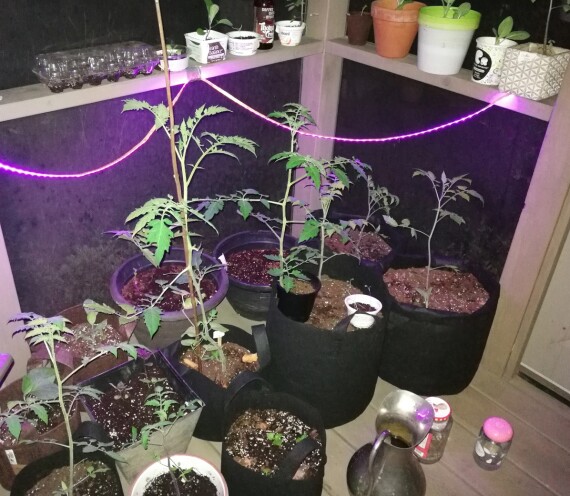 You may notice that there are mostly just tomatoes. Don't worry, I'm growing peppers too. I'm a cool guy. Yeah of course they're spicy.

This is the southeast corner of the porch. You may also see aubergine (which is what an eggplant is actually called, by the way), basil, heirloom tobacco, pepper seedlings, and broccoli sprouts. Lots of solanaceae out here (there's a very healthy potato bag outside too).

Now if you are a gardener, you might be thinking:

1. It is already September.

2. Look at that tomato plant in the tiny-ass pot you fuckin dweeb.

That is my black cherry baby and it's going to fruit in that pot. In fact, it is currently flowering and I am treating it with more care than my 16 month-old daughter.

(Not really, it's an exaggeration)

I'm experimenting with some of these tomato plants because I have so many.

All of the tomatoes and aubergine are smaller varieties, so they should do fine when I have to bring them in, assuming of course that baby Azalea doesn't decide to harvest them early and my mother doesn't burn them.

I wish I had a YouTube results video for you, but there are no such results yet. You can be sure as the Jew blood that runs through my veins that I'll post them on here when I have some.

If it hasn't hit home already, the moral of this post is: Be unconventional.

We are pretty much always wrong before we are right, and that's okay. In fact, it's necessary.

But yeah, this is long enough now. You needed a break from crypto to think about something tangible.