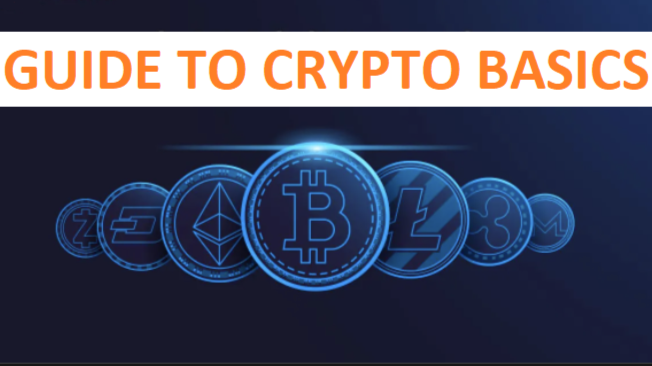 New to Crypto? This guide will help you understand the basics

First and foremost. Welcome to the exiting world of crypto currencies. What follows will be me explaining some of the basic terms you will encounter when first starting out on your crypto journey. Some of the terms can at a first glans seem like they are part of a complete separate language, or even alien sometimes. I know at least that was how I felt when I started out. I had a friend who taught me some of the basics. And that gave me sort of a running head start if you will. Compared to someone who is new to is al and is starting this journey alone.

So what will follow is a list of the different terms or words you will encounter. Followed by an, hopefully easy to understand, explanation. So will will start of with some east words. So follow along. And if you have any questions. Leave them in the comments and I will try and get to them as fast as I can. Now lets start:

Bitcoin - The grand daddy, the first crypto currency ever created. The origin of it al, probably the reason for why you are reading this now. What bitcoin did that revolutionized the financial world. Was that it allowed people to transfer wealth between themselves, without the help of a middle man. Normally in order to do this a person would need to go to a bank, deposit money. Then tell them to transfer that money to another persons bank. The other person would then be able to go to the bank and withdraw that money. So what bitcoin did was it cut out the middleman, in this case the bank.

Altcoin - Any crypto currency that is not Bitcoin. This is one of those "catch all" terms that get used al over. And it is used to either mean al other currencies, some, or only a few or one particular coin. You have to see the context where the word is used. As an example, I can ask you weather you have bought any new exiting Altcoins? Meaning have you bought any new crypto currencies that is not Bitcoin.

Shows a handful of the more famous Altcoins

Coin vs Token - One term that often gets added to a crypto currency is either Coin or Token. But what is the differences? At a fundamental level, both crypto coins and tokens are alike but they are two different things - all coins are tokens, but not all tokens are considered coins. Many people do not know if they should call it one or the other. So do not waist energy on this. The key difference between the two is merely based on their utility.

Blockchain - A blockchain is essentially a digital ledger of transactions. It is duplicated and distributed across the entire network of computer systems on the blockchain. So every one has a copy of it. This is done in order to stop someone from being able to tamper with the transaction records.

Mining - This is how most new coins are made. You probably have heard about Bitcoin Mining. In general mining is done either by using a Graphics card, or by using a machined built for the specific purpose of mining. Mining is also done either solo, where you mine alone competing vs every one ells. Or it is done in a pool, together with several others where every one is competing together. What they are competing for is the ability to be able the next block, of transactions, to the blockchain. And by doing that getting a reward.

Proof-of-Stake or PoS - A version of mining that is less power consuming. And often considered more secure then traditional mining. Here instead of using there graphics cards or special hardware to mine new coins. People use their crypto currency. They stake the coins, as collateral. And if they are chosen, they then gets to be the one who can add a new block of transactions to the blockchain. Getting a reward. But if they ad something faulty, they then loos their stake.

Wallet - A place to store your cryptocurrency holdings. Many exchanges offer digital wallets. Wallets may be hot, online, software-based, or cold, offline, usually on a device.

DEX - Decentralized Exchanges are a type of cryptocurrency exchange which allows for direct peer-to-peer cryptocurrency transactions to take place online securely and without the need for an intermediary.

Peer-to-Peer or P2P - The name for the interaction between two computers in a network. The computers operated as individuals and can share information and resources directly without relying on a dedicated central server.

CEX - Centralized Exchanges. Just like with a DEX this is a place where you can swap cryptos. The difference here is that it is not done on a Peer-to-Peer basis. But it is instead done at a centralized location. This is also where most transactions to and from Fiat are made with crypto.

Fiat - This is just a fancy name for normal money.

Stable coin - A particular type of crypto. Unlike a normal crypto currency that can fluctuate heavily in value. A stable coin has its value fixed to a Fiat currency. This is usually the USD. More often then not you get a hint in the name which currency the coin is linked to. Like USDT or BUSD.

DeFi - Another catch all term that gets used a lot. It stands for Decentralized Finance. More often then not when you see DeFi you expect it to involve crypto in some way, shape or form.

dApp - Decentralized Application, these are digital applications that run on a blockchain network of computers instead of relying on a single computer.

HODL - Hold On for Dear Life, refers to a strategy of hanging onto digital assets regardless. This id done regardless of short-term market movements. This is because the idea, or hope, is that gains over a period of years will overshadow momentary swings in value.

Bullish vs Bearish - If you are looking at price graphs, or any type of graph. You tend to see comments like "looking bullish" a lot. And basically what it means is a graph either pointing upwards, Bullish. Or downwards, Bearish. The terms are carried over from the stock market.

I hope that you have found this guide to be useful and a good steppingstone for you. On your journey into the crypto world. There are also a lot more articles that can be found here on al types of subjects. Like this one here, that takes a deeper dive into what a wallet is.

Pleas consider checking out my other articles. You can find them in my blog here and here.